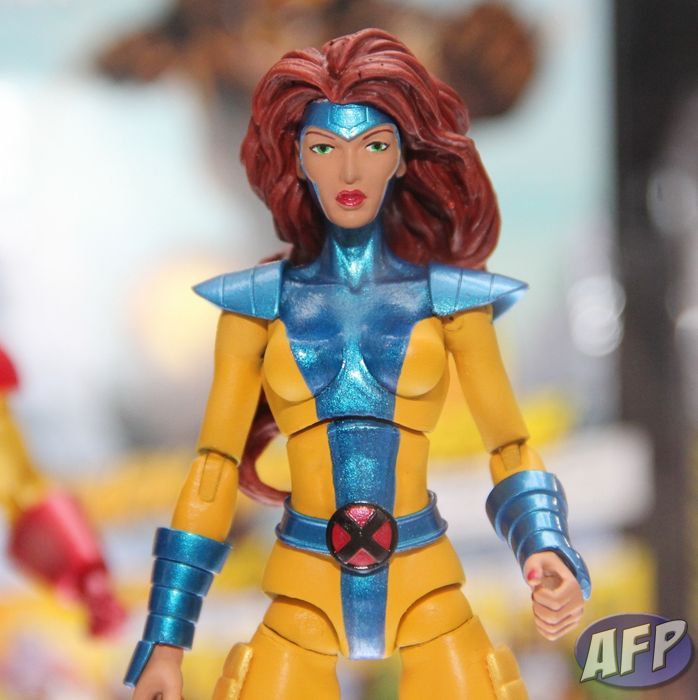 I know – I still have more Comic-Con pics to post. Hasbro revealed two figures from 2013 Wave 2 on Saturday and Sunday. First, a perennial favorite in the Fwoosh Top Ten polls – Jean Grey in her Jim Lee era costume. And to complete the Wrecking Crew, the Wrecker – Bulldozer will be a swap-out figure for Wrecker in that wave. 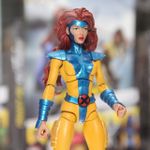 Since this was the costume in which she appeared on the 90’s animated show, I understand the mass appeal – but this Jean Grey in the comics was a whimpering mess, so I am predisposed to hating her. Still, the painted prototype is a beautiful figure, and I’m going to keep my fingers crossed that the head sculpt doesn’t get pinched when she gets tooled up.

Jean reuses the Elektra body (ugh) with some overlays for her wrist bands, belt, and shoulder pads. Folks are bemoaning the missing blue arm pouches on the upper arms – I guess new thighs were all Hasbro was interested in replacing on the Elektra body. 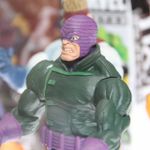 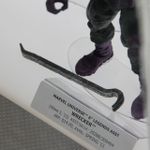 Wrecker is built on the same base body as previous Wrecking Crew members Thunderball and Piledriver, which traces its roots back to Warpath and the Toy Biz Hulkling. He’s got a great new torso with his collared jacket to give him the individuality he deserves. Bulldozer is going to require some new parts too, for the big rivets on his collar, gloves, and boots. I imagine the collar will be an overlay, but wonder if Hasbro will create new gloves and boots, as those also have some banding in them.

I think Hasbro’s push to get us some completed compact teams is great. I like that with Deadpool in wave 3 this year we’ll have the original Uncanny X-Force team completed, and by this time next year we should have a 6-inch Wrecking Crew to beat down Thor and the Avengers. With Moonstone, and her kicking new body, to kick off a Thunderbolts team (she was revealed during the Hasbro Marvel SDCC panel), maybe we’ll see a return to large Build-a-Figures with Atlas down the road – but not until 2014 at the earliest.

I also took some shots of the cardbacks for 2012 wave 3 – the BAF-less Epic Heroes wave. It’s interesting that we’ll actually have 4 swap outs for the wave, as Deadpool will get his red/black costume (a reissue from the 2-packs) as well as his X-Force one, and Doom will have his traditional green (also a re-issue, but supposedly with more paint apps) plus his Future Foundation white costume. With no BAF, Hasbro could tweak the pack out ratio even more – and I imagine that Mystique and Dani Moonstar will get packed pretty light.

Given the challenges finding Piledriver and Madame Hydra, I think it’s going to be tough finding whover the “variant” is going to be for the X-Mutant women. And even though that Moonstar head sculpt didn’t turn out so pretty, I think customizers will want to pick up multiples for some easy X-customs. We’ll see, when these start hitting – I think we’re not that far off from seeing these on shelves.