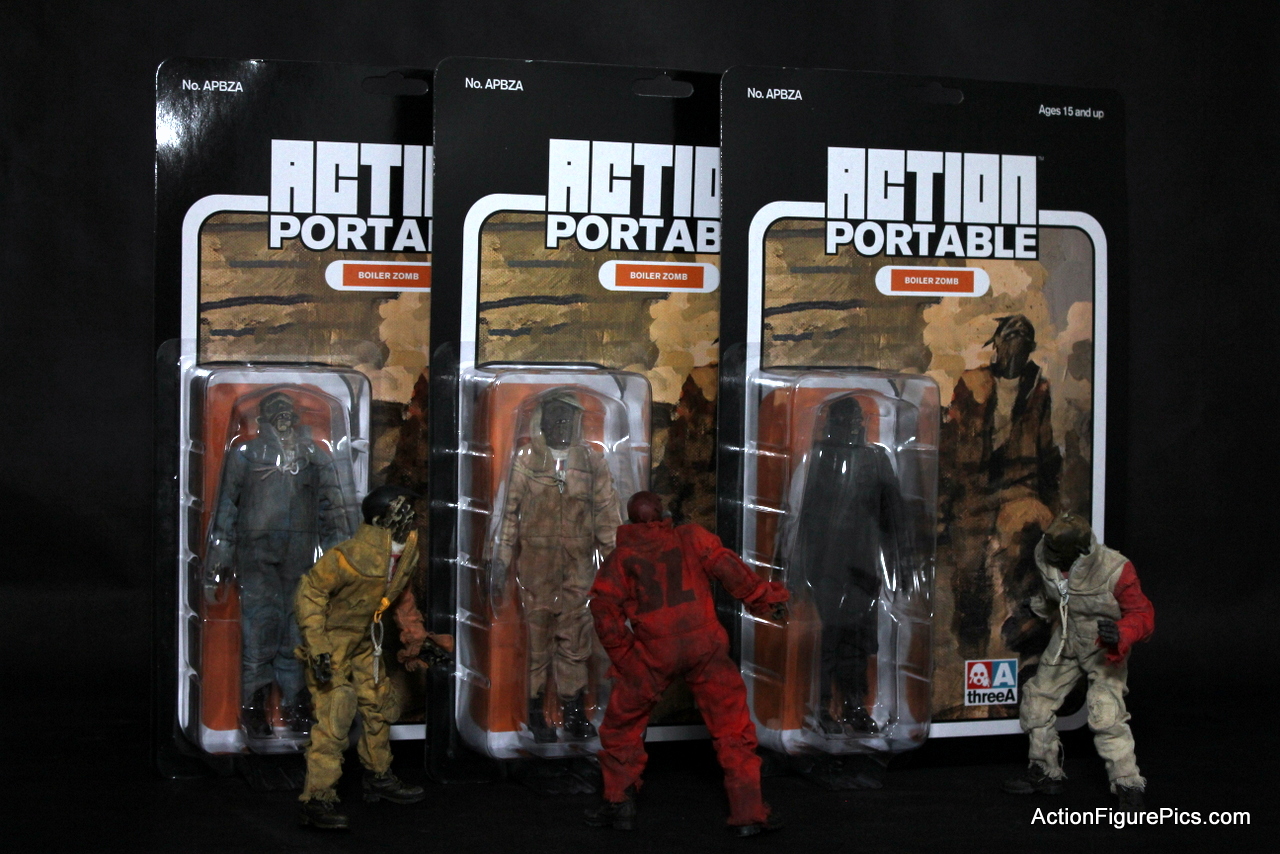 It’s Halloween, so there’s no better time to take a look at the super-articulated Action Portable Zombs by 3A Toys. The 6-inch Zombs were offered for pre-order last year and delivered this summer – and I have bashing my brains out (coincidentally one of the ways to kill a zombie) for not having ordered more of these. I did pick up the 3-pack (the 3 guys staring at the carded figures), the Shadow Zomb (he’s carded in all black), and a blind-packed single (turned out to be the pink hooded Zomb). But the more I play with them, the more I want to build an army of these undead guys.

The cards have a retro vibe, and even though I open most everything I get nowadays I’m still reluctant to open anything from 3A – maybe because the stuff isn’t cheap, but I think it’s also because of the artwork on the card. But for a 6-inch figure, the single carded guys have a ridiculously large card. The figures are held by a plastic insert with fitted cover to keep them secure. But I’ve resolved to open these guys up. 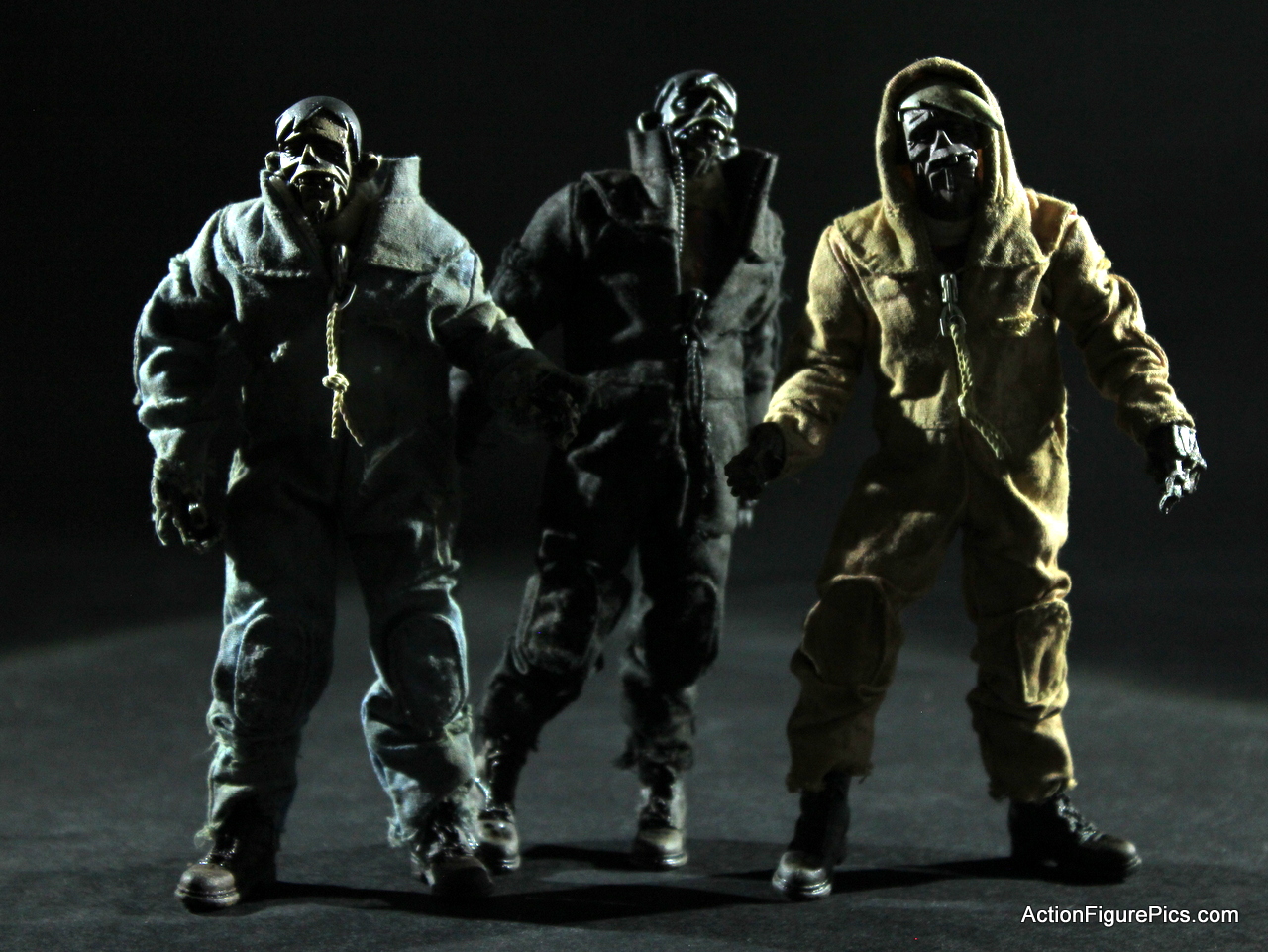 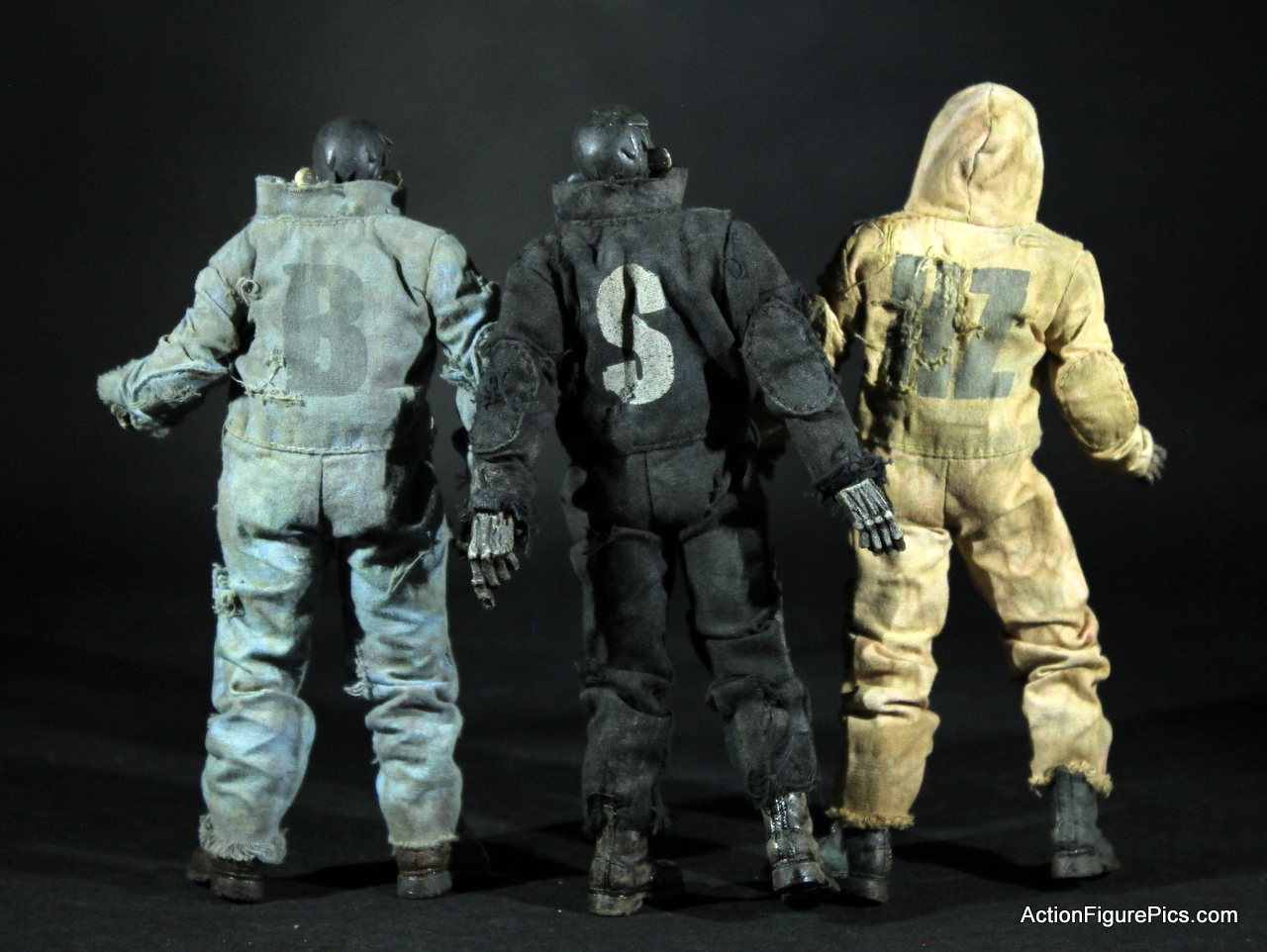 The Zombs are fun to pose and shoot. I didn’t notice the same sort of grittiness on their boiler suits as I have with WWRP pouches, for example. The clothes fit well and are suitably tattered considering the zombie apocalypse, and they don’t hinder posing.

And with the amount of articulation in the figures, it’s easy to get them into zombified poses. The joints on mine are nice and sturdy – with other 6-inch 3A humanoid figures I’ve seen some problems with loose ankles and feet popping off. Not with these guys. The only part I’ve had fall off are the heads – but they pop back in easily and they don’t pop off with any sort of annoying frequency. 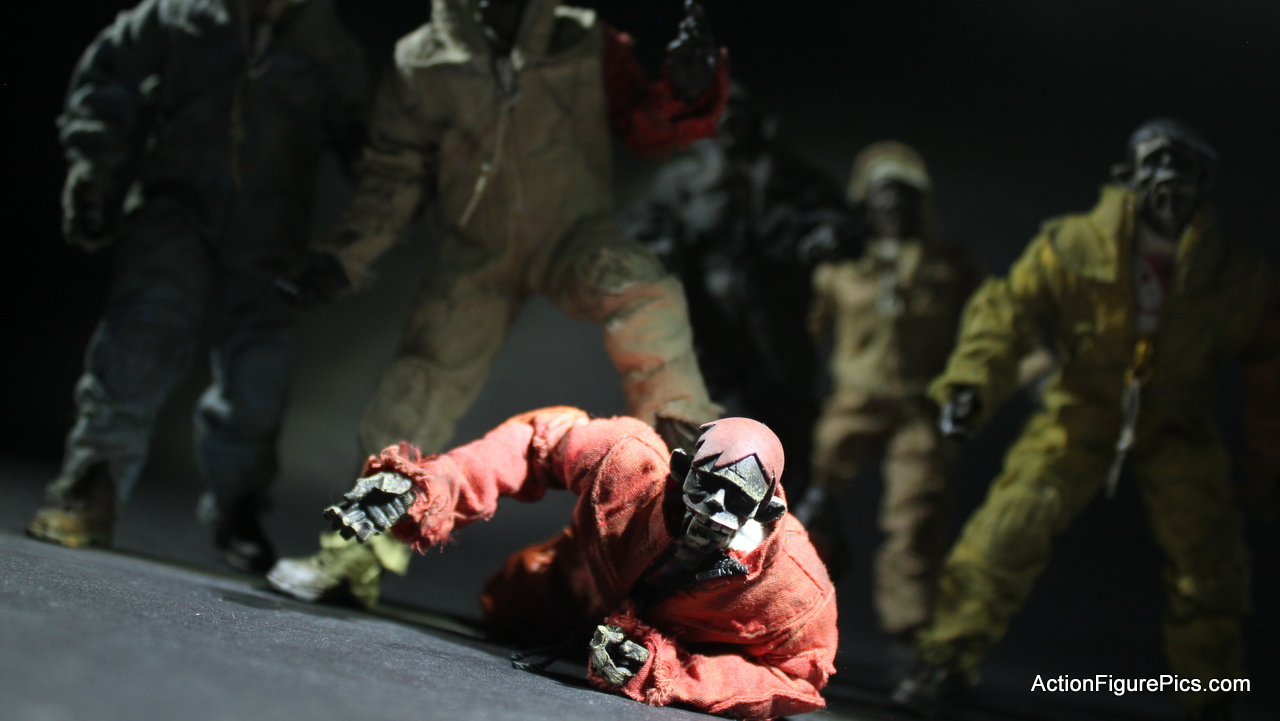 Because I’ve been more mobile lately, I’ve been using Google’s Picasa to manage and process figures to save time. The shot above is the straight up shot to capture your impending doom from the Zomb horde. 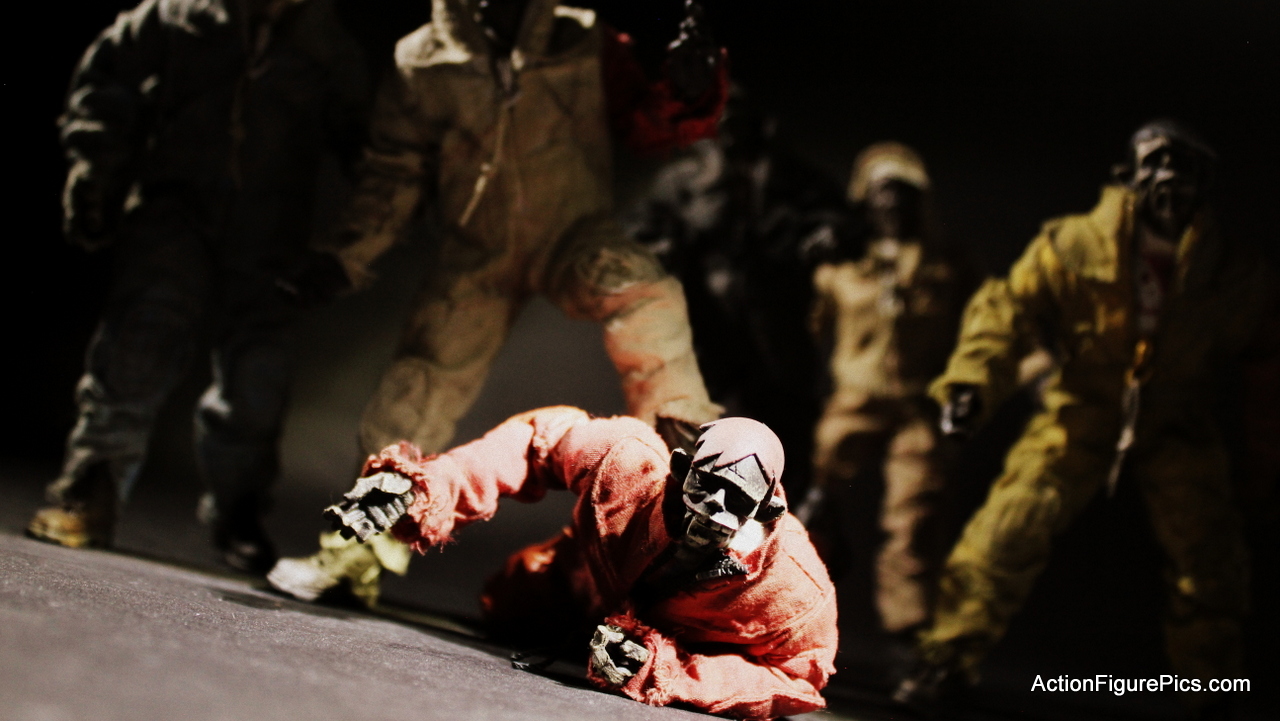 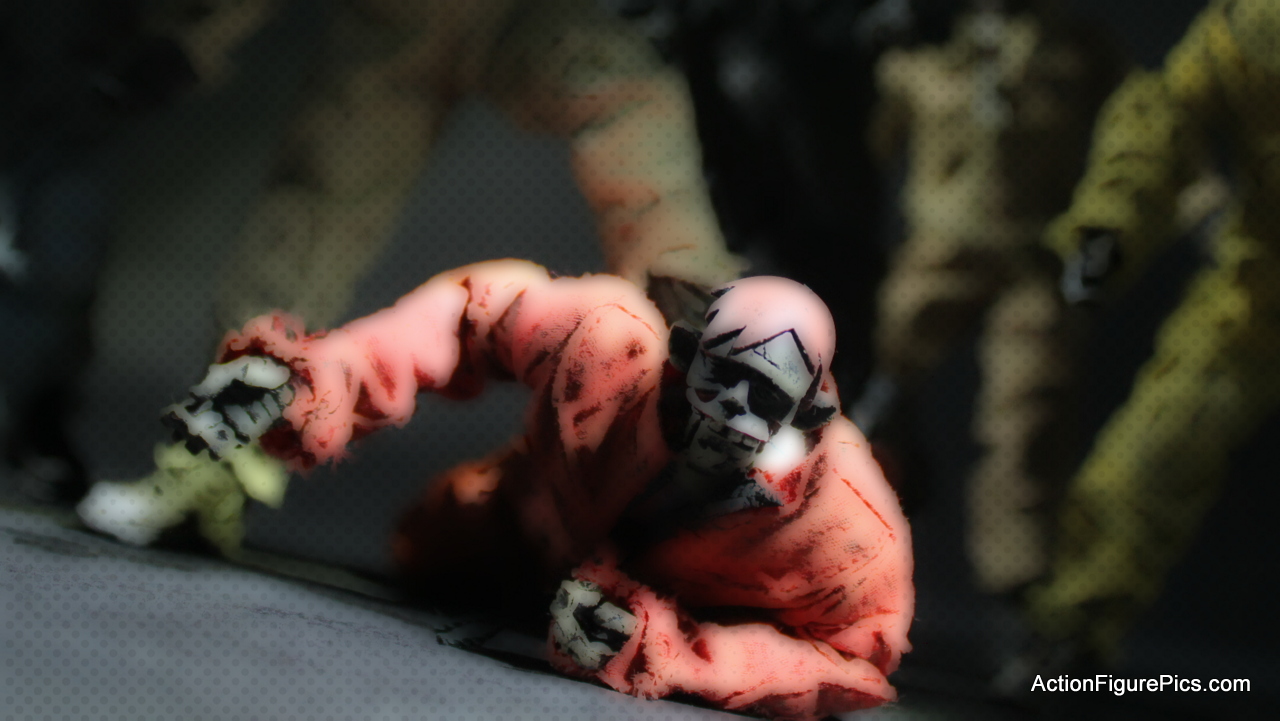 And this one shows the Comic Book filter, which for the Zombs has an oddly satisfying effect for me. Since the Zombs started with Ashley Wood’s art, it’s fun to turn a 3D figure back into a 2D faux art representation. 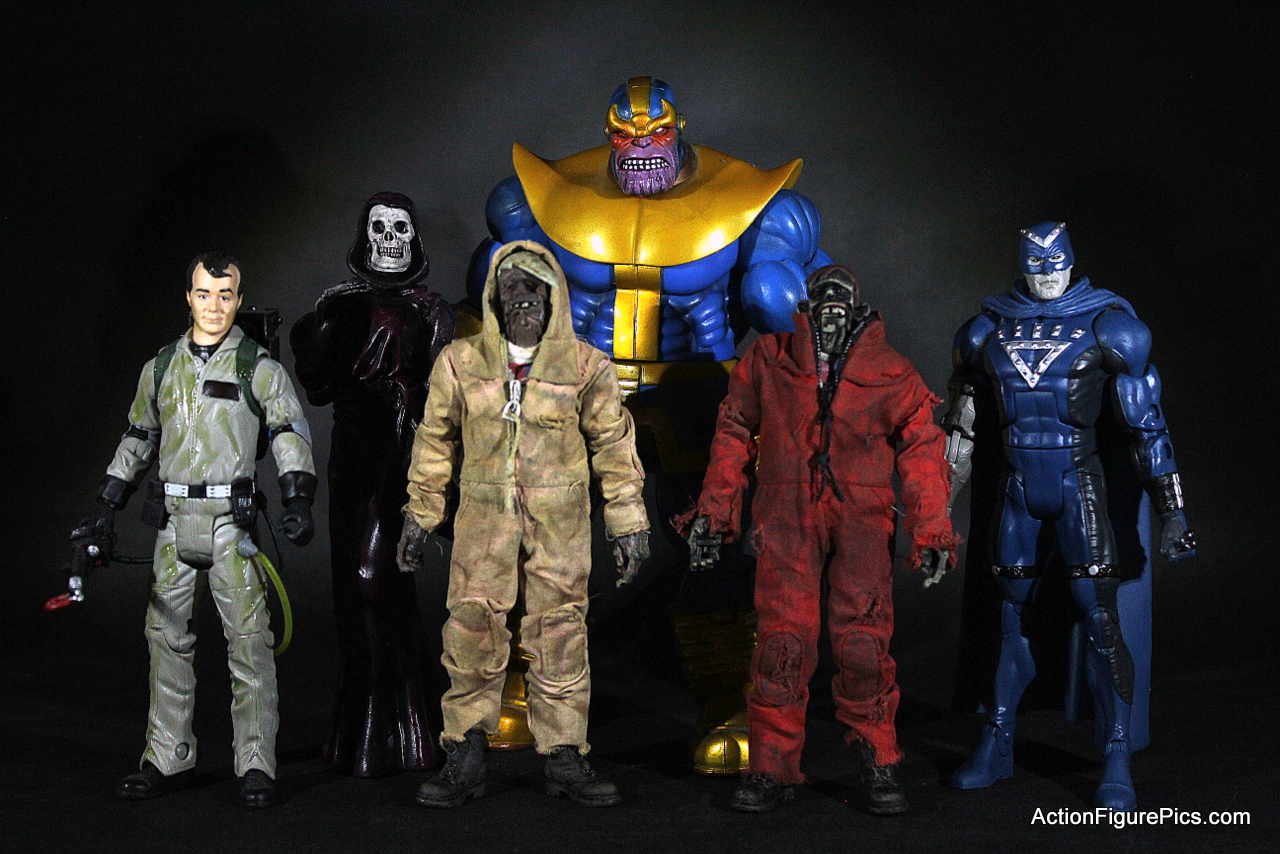 I’ll have to take more pics as my Zomb horde grows. For now, have fun Trick or Treating! Happy Halloween!