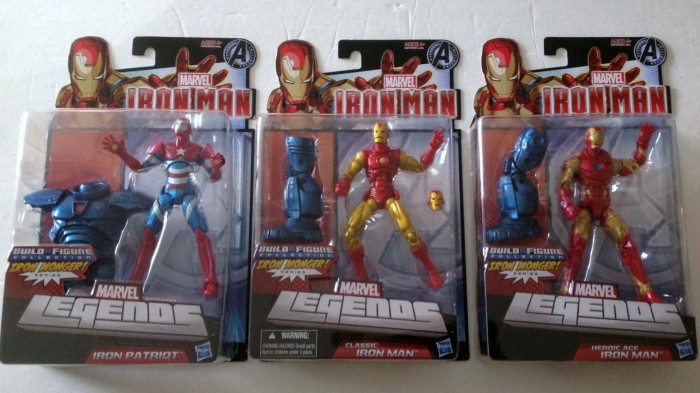 When we saw the line-up for Iron Man Marvel Legends at BigBadToyStore a couple weeks ago, I wondered if, with just three figures in the wave, if the Iron Monger Build-A-Figure that Hasbro teased back at San Diego Comic-Con would still be part of the line. Now that Hasbro Iron Man 3 Marvel Legends is hitting eBay, we know the answer is a resounding “Yes!” It’s going to take six figures across two waves to do it, and if Hasbro can improve the distribution that we saw with Hulk Legends and Fin Fang Foom, we should be in pretty good shape.

I know some of you were hoping that Iron Patriot would reuse the Walmart exclusive War Machine to align with the upcoming Iron Man 3 movie, but he looks to be using the Extremis Iron Man from (Ro)ML series 1 from last year, as I had guessed. The other two were as I expected too, with the classic horned Iron Man reusing the 2-pack Iron Man (but with swappable heads – nice!) and the Heroic Age looking exactly like a scaled up version of the Marvel Universe figure.

Credit for all the photos are from this eBay listing: Marvel Legends Iron Man Build A Figure Iron Monger Set of 3

The prices for all the auctions are crazy right now, but these will be hitting retail and online shelves soon – it might be as tough as it was for Tony Stark to let go of the bottle, but you can wait for better prices for these babies! Or go ahead and buy them, and send me pics when you get them in hand! 🙂