The Fwoosh’s Matthew K was kind enough to let me post his Masters of the Universe Classics feature for Jitsu (my favorite Masters character, if you somehow did not know that :)) right here on AFP. As always, Matt has created some absolutely beautiful pictures – so much better than I would be able to do myself. Jitsu deserves it! Thanks so much, Matt! 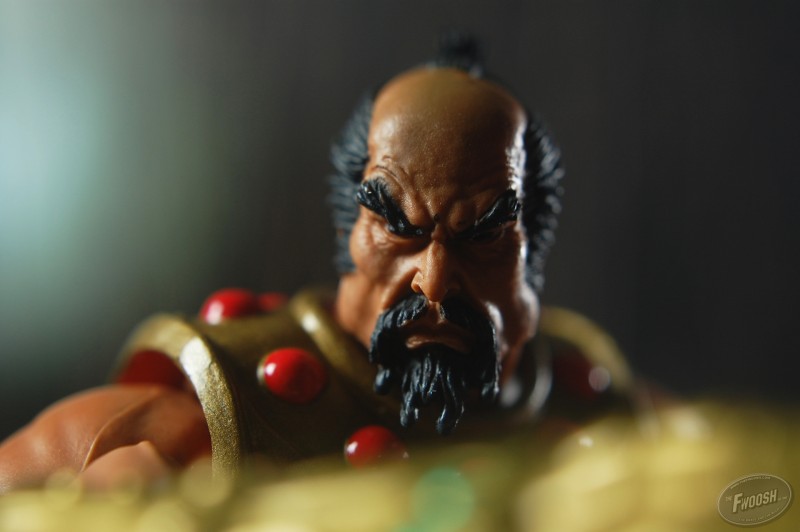 Let’s take a look at February’s Masters of the Universe Classics figure – Jitsu!

An intergalactic bandit, Jitsu™ was broken out of Prison Starr by Keldor™ during the Great Unrest. In gratitude, he agreed to serve the Evil Lord of Destruction™ and stayed with him even after Keldor’s transformation into Skeletor®. As a master of several forms of martial arts, Jitsu™ was often on the frontline in battle against Randor and his Masters. During the Battle for Gretori Bridge, he was wounded by his archenemy Fisto™ and had his hand replaced with a golden robotic implant by Tri-Klops®. After Skeletor® left Eternia® for the stars, Jitsu™ took over Snake Mountain™ ruling it with an iron fist. As deadly as he is silent, Jitsu™ uses his chopping power to get his evil way!

There’s a lot to like in this bio. First off, I love the idea of Keldor busting Jitsu out of prison to serve him. Jitsu must have had an impressive reputation for Skeletor to go through all that trouble to get him. The jail orbiting the planet is also a fun idea I’d love to see played out some more in additional stories.

It’s also cool that they establish Jitsu as a long time ally of Keldor and Skeletor. I feel like this puts him on a more equal footing with Trap Jaw, Beast Man and Evil-Lyn that he hasn’t really shown to be at before.

It’s interesting that the bio writer chose to make Jitsu leader of Snake Mountain in Skeletor’s absence. I can’t say I ever really considered Jitsu a contender in that respect, but the fact that he took over does lend him a bit more cachet than he has ever had previously.

That’s not saying much, since Jitsu is one of those MOTU characters that really never got much media attention.

Jitsu comes with some cool stuff including his vintage Katana-like sword and two Kama. The weapons are all cast in a nice, sturdy orange plastic.

The blades of all three weapons are highlighted with some super-shiny metallic orange paint. I love that they do the metallic highlights on the blades. It makes the whole wacky colored weapons thing much more palatable for me.

The best thing about these accessories is that they can all be stored on the back of Jitsu’s armor. I love it when they add feature like this and hope they continue to do it with future figures.

I am so glad that Jitsu got unique armor. Randor and Jitsu shared armors in the original line, so it was always possible that they would do that with the MOTUC figure. Since the 4 Horsemen had embellished Randor’s armor with a cool looking cross and center gem, I didn’t think it would look as nice on Jitsu.

The new armor looks fantastic except for one slight flaw. Jitsu has to be hunched forward or you see his belly button poking out from under his armor. What’s comical about this is that his armor has an arrow that points directly to the exposed belly.

The golden Chopper has received a slight makeover from the vintage days. The fingers all have detailed individual sculpts and there are now some cool green jewels in the knuckles. It’s just enough new stuff from the 2002 staction version of Jitsu for my taste.

Jitsu’s head sculpt looks to have been sculpted by the ‘5th Horsemen’ who also did the head sculpts for Fisto and Count Marzo. I think that is a good fit since many people will have Jitsu facing off against Fisto a lot.

The Jitsu head sculpt does feel a little different than his vintage counterpart as his face is more narrow and he is not gritting his teeth. I’m thinking the sculptor took a look at the staction and tried to incorporate that figure’s more narrow face and intense stare. I like this head sculpt quite a bit.

Jitsu has the standard MOTUC articulation and his loin cloth does not impede his movement. The chest armor is also pretty thin plastic and allows Jitsu to put his arms down at his sides more than figures with harder or thicker armor.

Jitsu’s paint is quite nice. The gold on his chopping hand is shiny and bright and the knuckle jewels have a sparkly green paint that’s a nice splash of color. The gold on Jitsu’s armor is a slightly darker, but still shiny, gold.

Jitsu’s head has a subtle dark overspray on his bald pate in order to indicate that he has shaved that part of his head. It’s a cool little touch. I also like that the red jewels on his armor are painted a glossy bright red.

Jitsu was not a top want from me. I don’t have any nostalgia for the character, I can’t remember ever playing with the figure as a kid, and he hasn’t really distinguished himself in any media.

I really only ever thought about him because I knew Ron really liked the character and he, along with Rammy, finish off the first MOTUC character poster.

That said, the figure is amazing. Jitsu is a fun action figure, period. The weapons, the massive karate chopper and the evil head sculpt all give him an imposing presence among the other figures in the collection. He looks great facing off with Fisto.

As Fisto was such a cool stand out figure last year, Jitsu feels similarly great. That’s appropriate when you consider that they were rivals with similar gimmicks in the original line.

The only thing I think could have been improved here was if they had included a 2002 style belt that had some samurai style skirt leg armor, similar to how Fisto came with a 2002 belt. That would have been nice symmetry.