I find blind-boxed collectibles frustrating – luckily, they tend to crop up more in the little vinyl figures that my wife collects, but I’ve caught the blind box bug once or twice. The two-inch Mez-Itz fit the bill for the blind-boxed approach – they’re super-cute and small enough to fit in those little boxes, but it probably means that these DC Mez-Itz will find a home at online and specialty retailers, whereas the previous DC assortments had made it to Toys R Us.

Any ideas on the chase? I’ll make my guess here – even though it’ll hit shelves a couple months after the movie hits theaters, I think it’s Superman in his Man of Steel costume. You heard it here first!

New York- Mezco’s ever expanding exploration into the DC Universe continues with the exciting edition of mystery Blind Box Figures. Each PDQ contains six characters from the DC Universe with 10 unique designs; each Mez-itz has a specific rarity scale with a super rare chase figure. 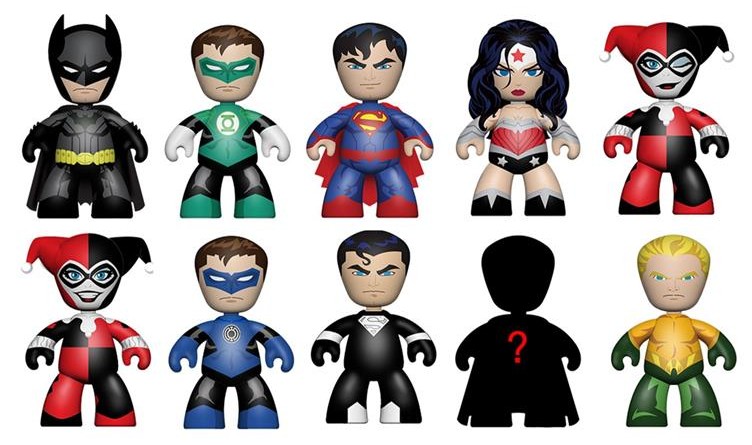 Each master carton contains three display boxes with 24 figurines in each. There is at least one full set within every case – including the hard to find super secret chase figure.

“I’ve been enjoying DC Comics since I learned to read” said Richard Ford, a member of Mezco’s award winning design team, “To be able to work on this series and transform characters from the DC Universe into Mez-Itz is the next best thing to having super powers”.

These figures are individually blind-boxed, which means you’ll be totally surprised by what you get! Blind-boxed figures come in sealed foil bags, without any clue as to which of the series is inside. The surprise stays secret until you open the box.