Congrats to the folks at AFI, now in their 8th year. This week they kicked off their anniversary celebration with this scoop – the unveiling of the upcoming Julie Newmar Catwoman from Mattel’s Batman line for the 1960’s classic TV show. Catwoman joins Bat’s Rogues Gallery – the Joker (revealed at Meltdown Comics), the Riddler and the Penguin. Two caveats – this is a hand-painted paint master, and the figure has not yet been fully articulated. 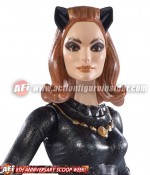 Catwoman is the fourth and final major recurring villain that frequently teamed up with fellow evildoers Joker, Penguin, and Riddler, so Mattel is completing a team AND opening up the number of great moments from the series that fans may want to “re- enact” with these figures.

This is the first-ever 6” scale Julie Newmar Catwoman, and the Design Team tells us it was a thrill to finally be able to capture this iconic rendition of the character in plastic!

The Mattel Sculpting Department poured a lot of love and attention into this portrait sculpt, creating MANY different versions over several months as they worked to capture the beauty of Julie Newmar and Catwoman! I think we can all agree that their hard work and attention to detail paid off! Just look at the texture and paint job on that catsuit! It looks like it just popped off your TV screen! All of the likenesses shown for this line have been top notch and the Catwoman figure is no exception. That face sculpt is one of the loveliest that Mattel has ever done.