After Mattel revealed that Clamp Champ will not have any figures left over for “day of” sales, many cherry-pickers (and some Club Eternia subscribers, too) decried Mattel’s perceived continued push to get collectors to subscribe or miss out. Now that they’ve revealed packaged pics of Icer, the first in the six figure Filmation subscription, will they get more flack? Icer will have some figures available for day of sales. The main difference? Clamp Champ was one of the original figures in the vintage Masters of the Universe line, while Icer was not.

I think there’s little point to try to read anything into production levels for the first couple of Filmation figures. They sold the subs in February, so at least for Icer they probably had to make an educated guess on how many figures to make. But as they can factor in the number of Club Filmation subscribers, I believe they will reduce the number of extras. Mattel has shown that they don’t want to risk carrying extra inventory – so let’s see if we have day of sales inventory for the rest of the Filmation line. 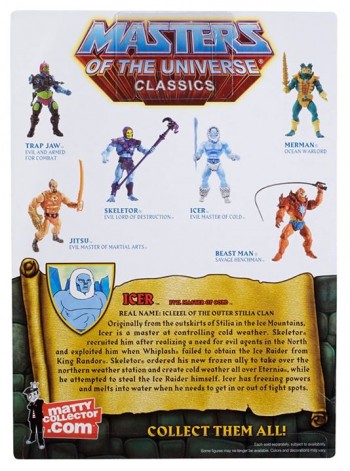 Icer comes complete with ice pick weapon and the animated version of ther Staff of Avion. Finally a cool accessory for your MOTUC Stratos figure! (or anyone else who wants to wield it!)

Catch you all on the boards!

via Icer glides in.

2 thoughts on “Will the Masters of the Universe Classics Icer Get a Cool Reception?”