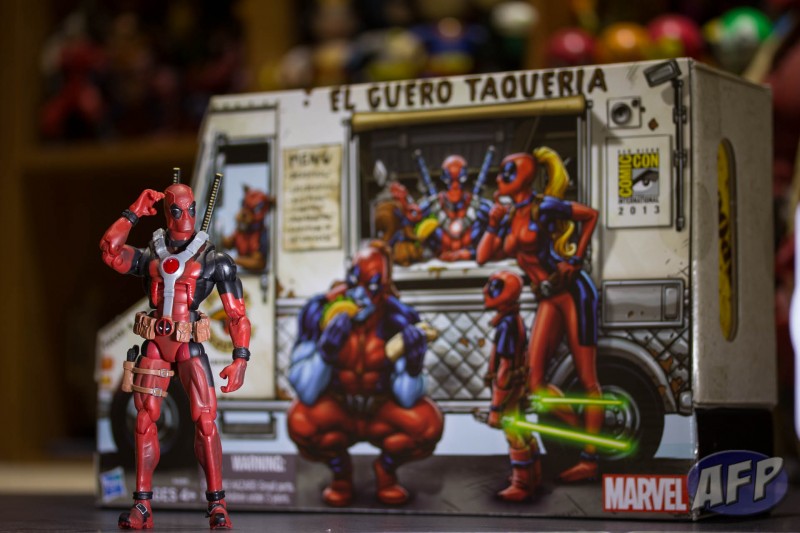 If you’ve been following AFP for a while, you probably know that I love Deadpool – so when I had a chance, I bought the San Diego Comic-Con exclusive Marvel Universe Deadpool Corps that comes ingeniously packaged in a taco truck. But as cool as the taco truck is, I’ve found that I just can’t get by my low regard for the comic book mini-series that spawned this 6-pack of of Deadpool, Lady Deadpool, Kidpool, Dogpool, Squirrelpool, and the Champion of the Universe. I mean, just typing that in has me shaking my head with disdain. So, instead of keeping this exclusive, I’ve decided to put it up for grabs in a special AFP Free Stuff giveaway.

(Note: Marvel Legends Deadpool, who is confused at my decision to buy something just to decide to give it away, is not part of this giveaway. Him, I’m keeping!)

It’s easy to enter, so while there can only be one winner of this contest, I hope that my dislike of a comic book will result in you getting your hands on a sold-out San Diego Comic-Con exclusive. And if you’re already a fan of the AFP Facebook page or follow the AFP Twitter account, you can un-like and un-follow and then re-like and re-follow using the contest widget, for those extra shots at winning this giveaway. Spread the word and good luck!