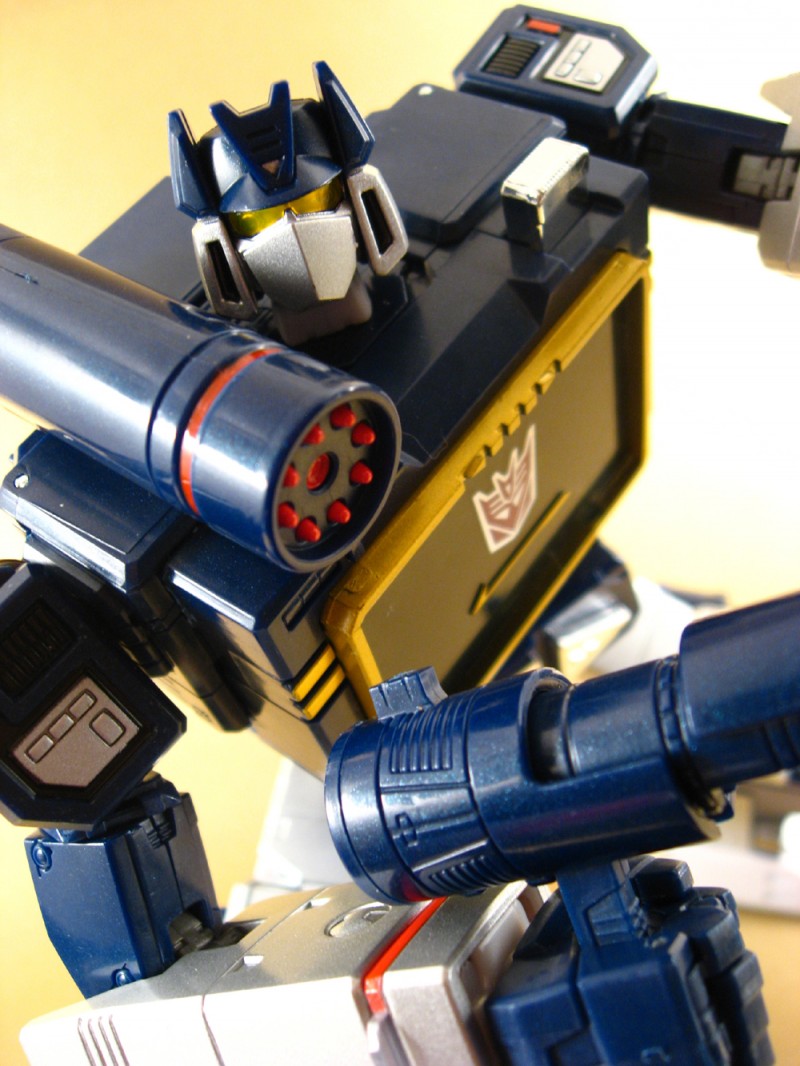 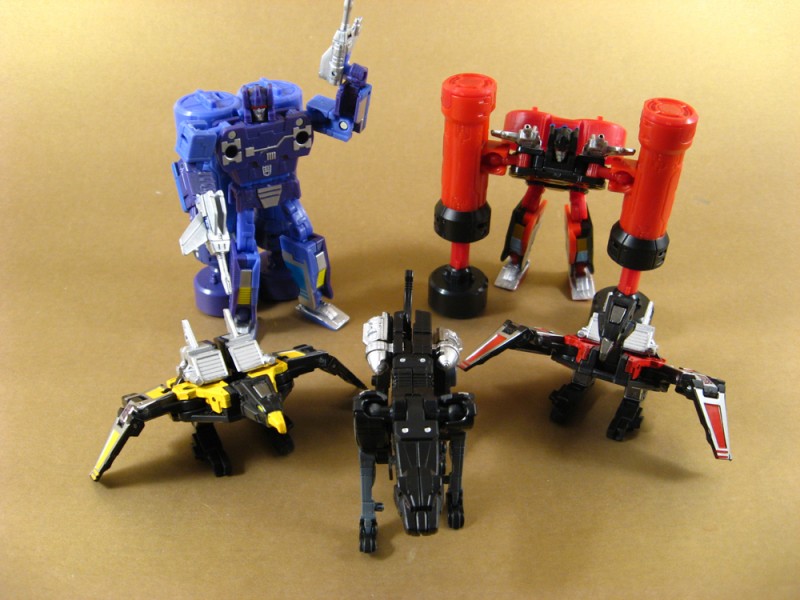 Hasbro continues their recent yearly tradition of bringing over Takara’s amazing Masterpiece Transformers with the new Masterpiece Soundwave. Hasbro really stepped up their game this year however, including all of the currently release cassette tape minions along with Soundwave. These cassettes had been sold separately in Japan and the inclusion of all of them in this set was a big surprise to most fans, especially considering the price of $119 that this set sold for. To put that in perspective, the Takara 2-packs of cassettes were $60 each, and this set includes Soundwave and 5 tapes, as well as a slew of accessories.

There is a lot of stuff that in this set, so lets start out by taking a look at Soundwave’s cassette tape minions one by one.

The most amazing thing about the Laserbeak/Buzzsaw mold is that it’s completely self contained. The original Laserbeak had gun/vent attachments on the top that were separate pieces, but this time around Takara managed to engineer them into the tape transformation. And they did this without increasing the site of the cassette mode. In fact, these Masterpiece cassettes are the exact same dimensions as the originals, making them compatible with your G1 Soundwave as well! 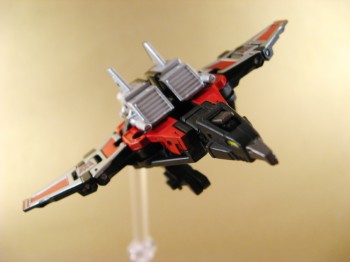 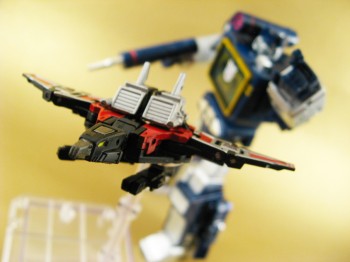 Ravage is another cassette that had external attachments that are now worked into part of the transformation. This one has a ton of great detail, and probably one of the smallest transforming pieces on a Transformer that I know of, Ravage’s nose is a separate piece that has to fold out. The articulation on this one is great and really lets you get some amazing feline poses. 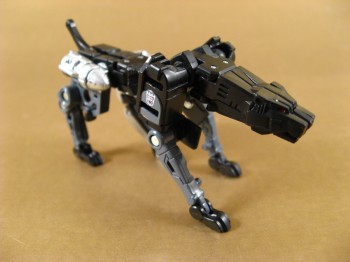 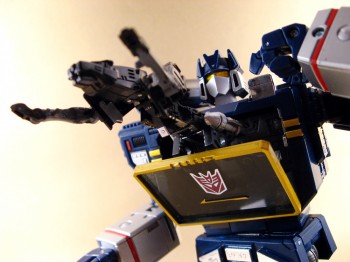 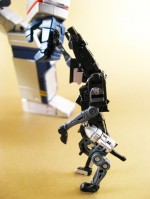 Regardless of which one of these guys you call Rumble or Frenzy, it’s pretty clear that they are amazing toys. These cassettes come with the most accessories, which are not part of the transformation like the others. Both Rumble and Frenzy come with separate pile driver/gun attachment pieces. These pile drivers can be used for their name sake by attaching to the figure’s arms, or as jet packs when attached to their backs. These can also be used as blasters by Soundwave himself. Each figure’s blasters are stored within the pile drivers and can also be attached to their backs like the vintage figures. 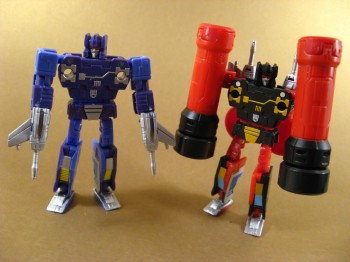 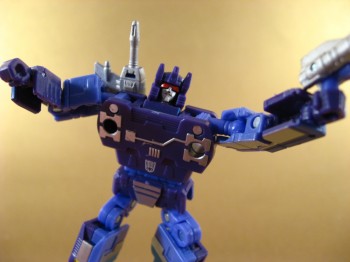 Now on to the main attraction. Soundwave is an amazing figure, regardless of transformation. His articulation is superior to any version of this character previously released, and the features he comes packed with really make him a great value. He has the required ejecting tape deck chest, but with added functionality. You can now fit up to 4 cassettes inside Soundwave!

Moving onto his accessories, Soundwave comes with a Megatron gun, alternate chest panel, alternate blaster hand, an energon cube attachment, and clear cassette cases for all of his minion buddies. The alternate chest attachment can hold printed inserts of different “displays” that are projecting on his chest. Takara had a few of these up on their website for you to print, but it would have been nice if Hasbro had included them instead of making you track them down. The Megatron gun is a downscaled version of the one that came with the very first MP Optimus Prime years ago. 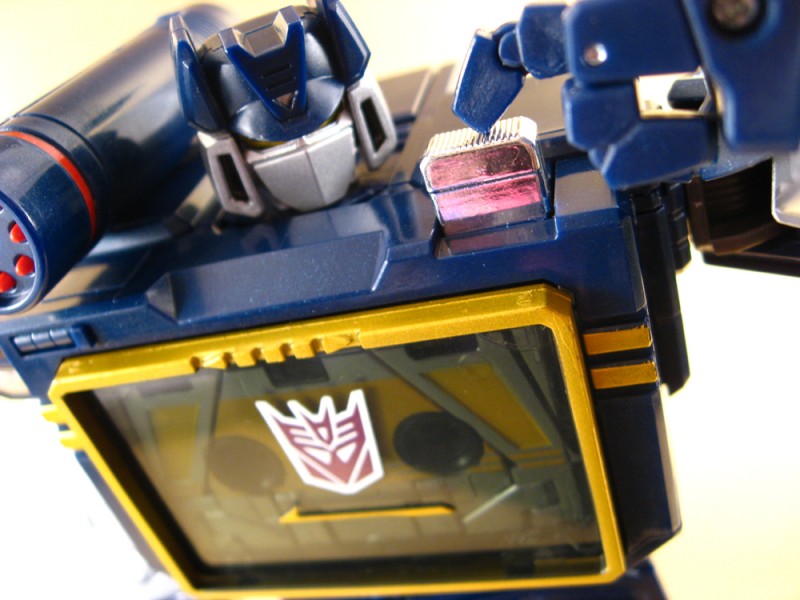 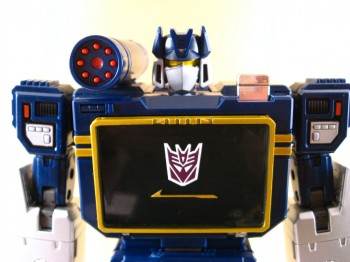 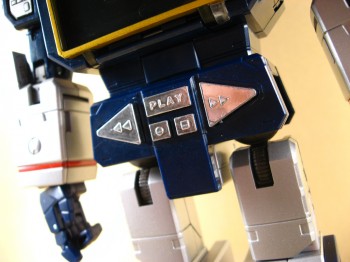 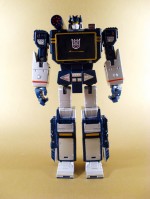 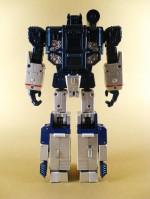 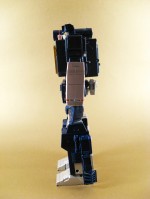 There are a lot of great hidden details in this figure, like the speakers sculpted into his forearm panels. And of course the ability to pose him touching the “eject” button on his chest is essential. The only joints on my Soundwave that gave me some trouble was the forward hip movement. The joints were so tight that when they eventually did start clicking, i thought i had instead snapped them off. They were insanely tight, so be careful of that. Soundwave measures up a little shorter than the recent MP-01 Optimus Prime released last year, which seems about the right height. 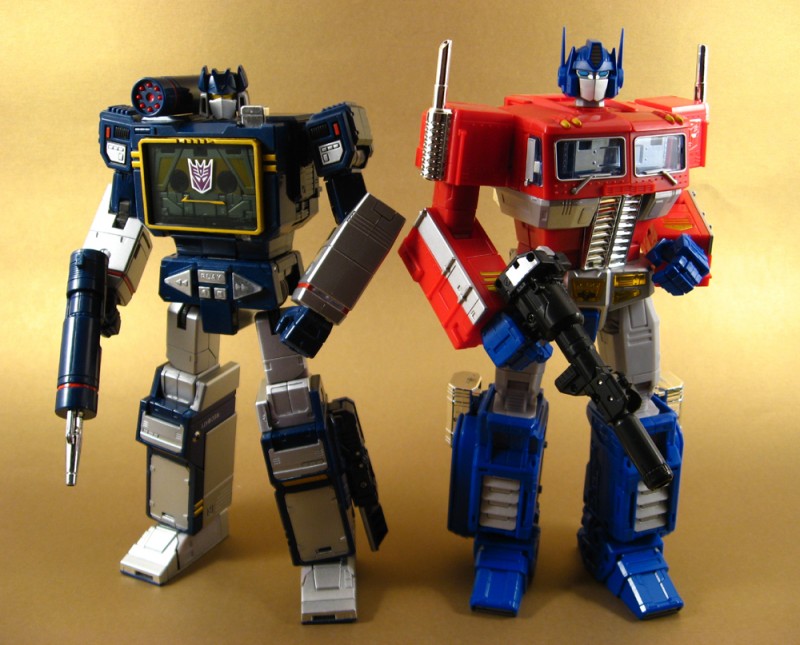 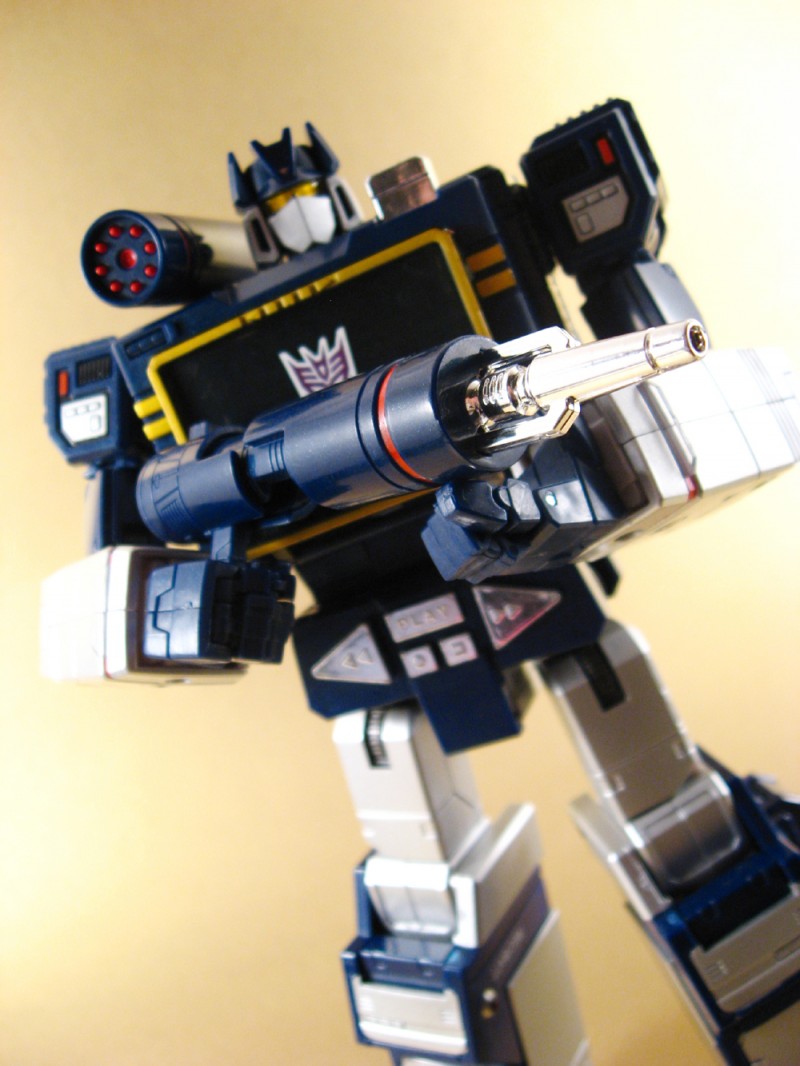 Getting Soundwave into his alternate mode is much easier than most Masterpiece figures, and that’s a welcome change. Considering Soundwave just turns into a giant block, they didn’t need to make this more complicated than it needed to be, but the transformation is still fun. What you are left with is a great homage to the original Soundwave with some cool new hidden features. Soundwave’s headphone jack is functional, in that you can plug headphones into the jack though it wont do much more than look cool. The “rewind” and “forward” buttons are able to be pressed, and the dials on his left and right both turn. And of course the tape deck can still open and eject the cassettes. This mode has storage for all of Soundwave’s weapons except the Megatron gun, which makes sense. 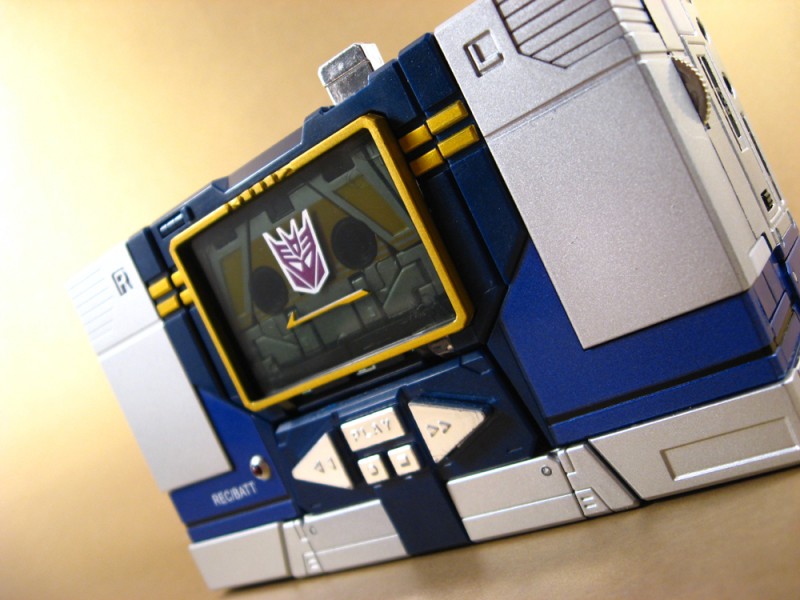 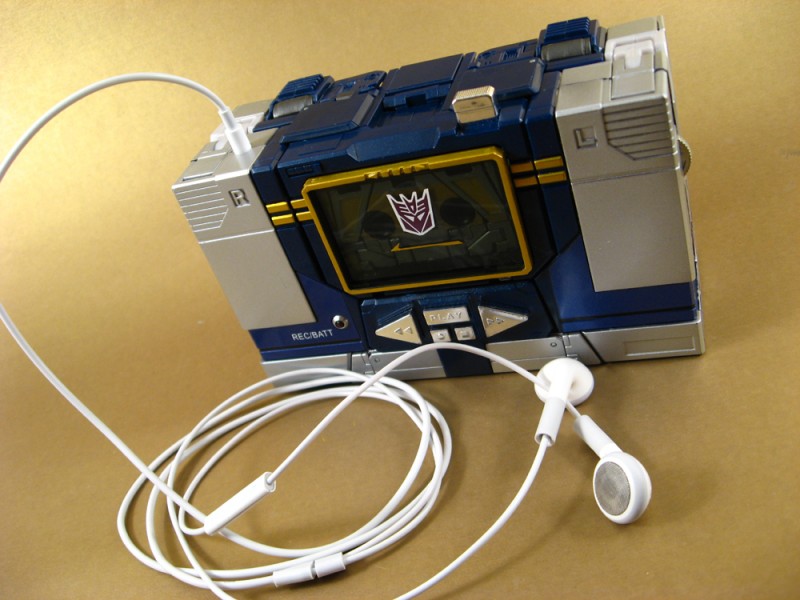 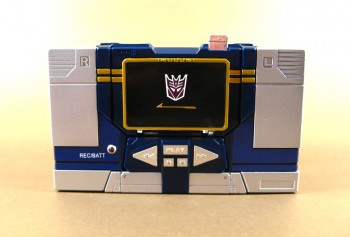 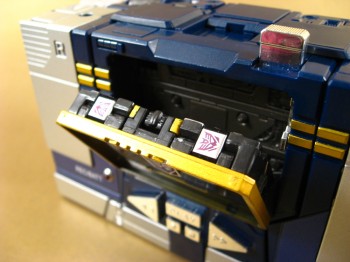 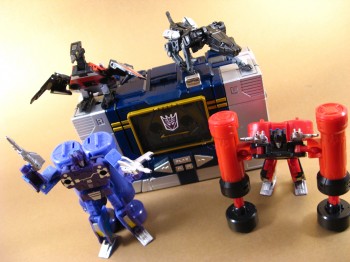 Now unfortunately, this figure is a Toys R’ Us Exclusive release and is therefore hard to come by. Each time this has gone up on their website it has sold out almost instantly. I really wish Hasbro was able to get these pricier Masterpiece figures into other retailers, but it’s understandable why that may be difficult, even though they are always hot sellers. If you can get your hands on one of these sets, it really is worth the price, considering all of the great accessories, cassette minions and amazing figure of Soundwave himself that the set contains.