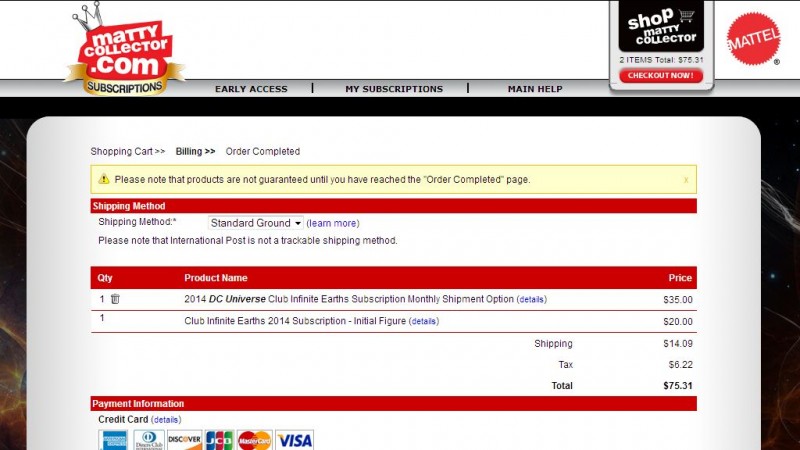 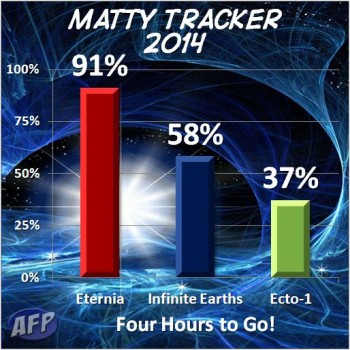 Update: Thanks to Kevin, who left a comment below, I checked my credit card activity and only have a pending charge for $38.15. So instead of having another reason to hate DR, I just dislike them a little more for being confusing. Please don’t let this discourage you from subbing to any of the Mattycollector subscriptions. Like I have suggested before – compare what figures you’re likely to get from the sub (pretty easy to do in case of Masters) against what you want from the line, and let that guide your decision-making. How you feel about Mattel, Toy Guru, or Digital River is just noise.

It’s more like seventy-five reasons – that’s what I was charged to pre-order the Club Infinite Earths subscription from Mattycollector. For two items that I will (potentially, if the sub actually goes through) get four and six months from now, I was charged the full price for the figures, the shipping, and tax. “Why are you surprised?” you may be asking – after all, I have subbed from the beginning. So I used the dreadful Customer Service link to find my previous orders to compare.

For reasons that are beyond my ability to fathom, the cost has gone up. Last year, for THREE subs, I was charged in the neighborhood of $150. Two years ago, for TWO subs, it was around $100. So, Digital River has found a way to increase what I’m charged four months in advance by 50% ($75 for one sub compared to $50).

But I suppose the more interesting thing here is that while this crappy practice of Digital River sitting on our money has been going on since the beginning, I didn’t even bat an eyelash before, even though the amounts were higher. I guess my dissatisfaction with Mattycollector and how Digital River handles the front end has been building up to the point where I don’t feeling good about buying from them. For someone who loves the toys, that’s saying a lot.

Anyways, time’s nearly up. What did you guys end up doing for the Mattycollector subs?

10 thoughts on “Just One More Reason to Hate Digital River”