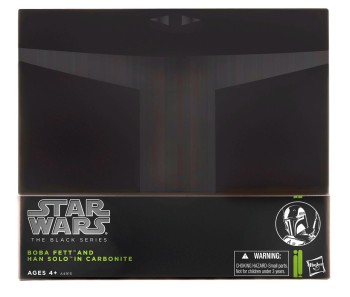 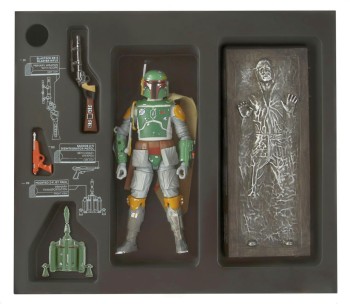 Normally, when I have some extra goodies available I’d put them up for a Free Stuff giveaway, because it’s a great way to generate publicity for AFP. I happen to have one of the exclusive Star Wars Black Series Boba Fett, with Han Solo in carbonite here. I was lucky enough to pick one up for myself at SDCC, but when I saw them available on HasbroToyShop, I put in an order for two more. The idea was that I’d be able to get them to get them to collectors that weren’t as lucky.

One of them went to SpyMagician from Spy Monkey Creations (check out their Weaponeers of Monkaa). The other was going to go to another friend, but he managed to pick one up on his own. And while I also had it available to trade for awhile, I decided, given the rarity of the figure, to try something different. So I have Boba Fett and his Han Solo paper weight up on eBay, with a portion of the proceeds going to Toys for Tots.

It’s up with a penny starting bid, no reserve, and free shipping (U.S. only – sorry, international fans). Toys for Tots will get 25% of the proceeds right from the closing price, set up directly through eBay. The way I’ve planned it, if it closes for around what they’re going for right now, then Toys for Tots will get little chunk of change, I’ll cover the cost of the figure and the shipping and eBay fees, and a collector will get a hard-to-find exclusive. Of course, it could also go horribly wrong – but even if it goes for cheap, it’ll still be in a collector’s hands, much like if I did a Free Stuff giveaway – so that wouldn’t be so bad either.

So if you’re still looking for the SDCC exclusive Boba Fett, or just looking to help out Toys for Tots, please consider making a bid. For more pics, check out Sandman’s Boba Fett Quick Pics from SDCC. Thanks, and have a great weekend!