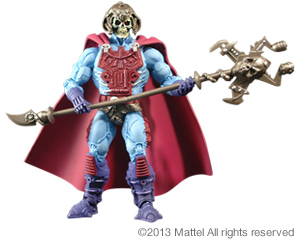 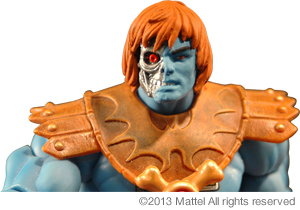 Now we know how we’ll be getting that Robot Faker head – it will come with New Adventures Skeletor. And yes, the sword that Mattel teased at NYCC belongs to Flutterina. She has an actual skirt, so we can’t complain about the skirts that Mattel has been unintentionally giving the female characters in Masters of the Universe Classics recently.

And the latest reveal in the booth – Broom! For you Princess of Power fans, does that signal a Madame Razz in 2014?

The Mattypalooza panel with Toy Guru and special guest Stan Lee himself just wrapped up! MOTUC fans got a look at three awesome reveals, and now it’s your turn to see these great toys that are coming your way…

Masters of the Universe® Classics Flutterina™

The owner of the mysterious sword seen at NYCC has been revealed! The first Flutterina™ since 1985, this Princess of Power® is scheduled for August 2014 as part of Club Eternia®. She features giant articulated fairy wings, perfect for soaring straight into danger!

Masters of the Universe® Classics Skeletor®

More wreck and ruin come your way in 2014 with this third quarterly item in Club Eternia®. The newest variant of the Evil Lord of Destruction™ features an amazing sculpt from The Four Horsemen, and comes with a removable power staff and a fan-demanded battle damaged Faker® head for your existing Faker® figure.

One thought on “Mattel Shares Comikaze Mattypalooza Reveals, plus Broom”