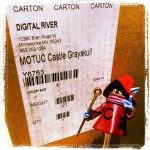 For the most part, I’d rather just see pictures and read reviews about toys, so I rarely watch un-boxing videos. In the case of the Masters of the Universe Classics Castle Grayskull, its arrival at the end of last week felt like an event. And with the box being so big, it just felt right to snap pictures throughout the process of opening the outer box, inner box, and then the Castle itself. I also took a few shots of the parts and assembly, and then a couple more for fun.

Hopefully, if you’re still waiting for your Castle Grayskull, this will give you some flavor of what’s heading your way. By the power of Grayskull…

[Start at the bottom and work your way up…]

I will probably continuing taking pictures but won’t have a lot to say about the Castle. I think it’s a topic that’s been beaten to death during the pre-order and waiting phases. But if you do have any specific questions or requests, leave them in the comments below, and I’ll do my best to answer. Thanks!