If you’re looking for another opportunity to get Fisted by Mattycollector (groan, I know) then here’s your chance. In another “show off your collection” contest, Mattel is offering up four Masters of the Universe Classics Fisto figures, signed by Toy Guru and Terry Higuchi. If you weren’t a Club Eternia subscriber in 2012, chances are you weren’t able to get him, at least off of the Mattycollector site.

Since the Matty team plans on announcing the winners at Toy Fair, time is short – so get snapping and submit your entry before the contest closes on Thursday, February 6. 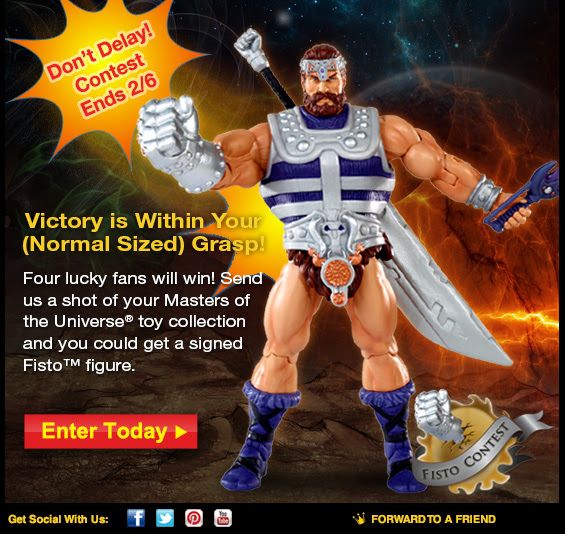 What’s a whole lot better than a knuckle sandwich? How about getting your hands on a highly popular Fisto™ figure! Send us your best shot of your Masters of the Universe® toy collection and you could be one of four lucky winners. Here’s how…

Our line is entering its sixth year, and we want to see how impressive your collection has become. Show us how creative you are at displaying your figures. Who has the prime spot front and center? Who’s conspiring in the back? Who’s in your army? (You do have an army, right?) We’re looking for originality, enthusiasm, and that true collector spirit.

This highly popular figure sold out faster than you can say “five fierce fingers” when it was released in February 2012 and has not been available since. But, we convinced our marketing and design departments to part with four figures from their own personal collections, and we’ll award them to the most deserving fans based on the entries we receive. These figures are new, still in the box, and signed by our own Toy Guru Scott Neitlich and the figure’s designer Terence Higuchi.

Make sure you read ALL the rules (click here to get the forms you need) and submit them to us with your photo as a JPG. We’ll select the winners and announce them at the New York Toy Fair and on MattyCollector.com on or before February 17, 2014. The winning photos will be also posted (#FistoContest) for enhanced glory and bragging rights.