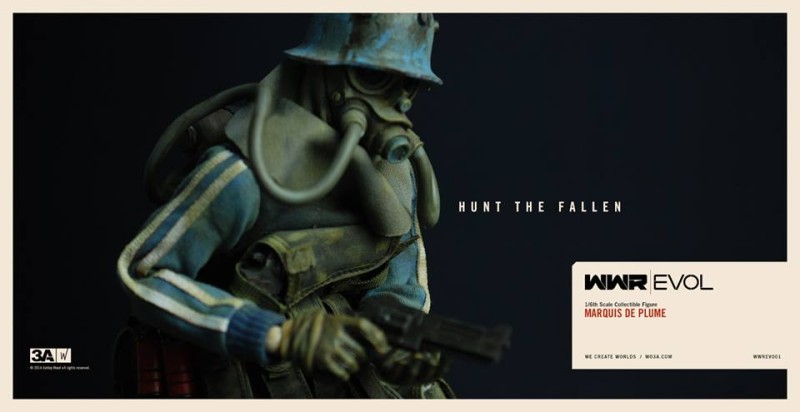 The second phase of 3A Toys’ World War Robot franchise begins today, with the pre-order of the WWR EVOL Marquis de Plume. For the time-zone challenged, that takes place on Bambaland starting at 8PM EST today. The Marquis de Plume will cost $130 (includes shipping), and 3AA members will be able to pre-order an exclusive set with a Prey Box for $15 more. No official pics yet of the Prey Box, but 3A says it will be different from the one shipped as a bonus in 2013’s 3AA membership kit to folks who’ve been members since its inception.

3A will also have two Marquis de Plume t-shirts available. Price has not been revealed, but they’re typically priced like the ones you get at rock concerts – in other words, get ready to empty your wallets. As Eminem rapped – love is evil (spell it backwards). Profound.

Marquis de Plume goes up for pre-order at www.bambalandstore.com on February 28th at 9:00AM Hong Kong time

Pre-Order Event page: http://www.worldofthreea.com/events/marquisdeplume allows you to sync the sale time to your Google Calendar or iCalendar.