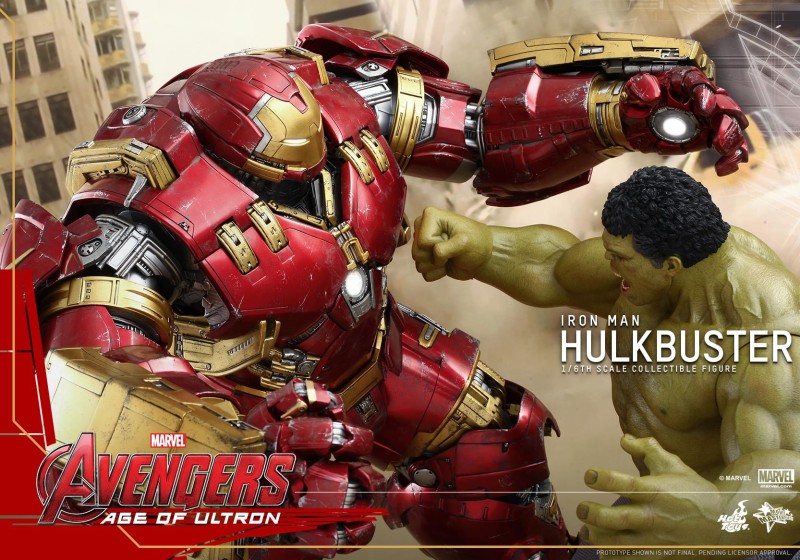 One of the highlights of the Avengers: Age of Ultron trailers is seeing Hulk mix it up with Iron Man in a new set of armor – the Hulkbuster armor. So it was a real treat for me to see prototypes of both figures at the Hot Toys Secret Base – their flagship retail store in Hong Kong.

Now, my trip there was last minute and not related to toys at all, so I had really not planned to and was not prepared for a visit there. In fact, I was under the wrong impression that the Toy Hunters store, where I had previously seen Ultron Prime, the Iron Man Mark 43, and Captain America from Avengers: AOU, and the Hot Toys Secret Base were one and the same. When I didn’t see the Hulkbuster there, I realized I was wrong.

By the time I made it to the Secret Base, which was in a completely different building on the other side of the block, it was already closing time. I was able to convince the store rep guarding the door to let me in for a few minutes, since I was leaving the next day and wouldn’t have a chance to come back.

I’ll post more pics of the store separately, but suffice to say it was a sensory overload experience. The new Hulk deluxe set and Hulkbuster Iron Man were featured immediately inside the door and if that’s all I had seen, it would have been worth it. (Luckily, I got to see the rest of the store too!)

Here are the official press releases for the figures. Hulk is available as a single figure and as a deluxe set, which includes two new head sculpts and a swappable “Hulk Smash!” upper body.

He’s always angry! In the upcoming eagerly-awaited Marvel’s Avengers: Age of Ultron, the Earth is in danger again as the evil artificial intelligence Ultron is set on wiping out all life on the planet, and it is up to the Earth’s mightiest heroes to stop the terrible fate from happening.

Don’t miss out on adding the incredible Hulk to your Avengers: Age of Ultron collection!

Prepare to meet the big angry monster! In the upcoming highly-anticipated Marvel’s Avengers: Age of Ultron, the Earth’s mightiest heroes are assembling again to defend the world from the dangerous Ultron who is bent on eradicating mankind.

Fans of the angry green giant shouldn’t miss the chance to include this deluxe set to your Avengers: Age of Ultron collection!

The Hulkbuster Iron Man is available as a single figure, but Hot Toys issued a separate press release to highlight that a full-size Iron Man Mark 43 bust, with LED lights, was included underneath that Hulkbuster chrome dome.

This is the Iron Man armor you have been waiting for!

Ever since the first official appearance of the massive anti-Hulk Iron Man suit, Hulkbuster, in Marvel’s Avengers: Age of Ultron trailer, fans worldwide have been filled with excitement! Its fight against Hulk is an unforgettable moment from the clip and pushes the popularity of the huge machine to a new level even before the movie launch!

Today, we are proud to officially introduce the collectible figure that many fans and collectors have been longing for – the spectacular 1/6th scale Hulkbuster Collectible Figure!

The movie-accurate collectible figure is specially crafted based on the image of Hulkbuster in Avengers: Age of Ultron. This colossal figure stands approximately 55 cm (21 inches) tall, featuring a Mark XLIII bust inside the Hulkbuster with LED light-up eyes and arc reactor on chest. The metallic red, gold and silver armor with weathering effect, and over 16 LED light-up areas located in the eyes, chest, repulsor palms, back, and legs.

Prepare to make room for this gigantic machine in your Avengers: Age of Ultron collection!

Hello everyone! We have great news to share with you.

One of the most highly-anticipated features of the recently announced Marvel’s Avengers: Age of Ultron 1/6th scale Iron Man Hulkbuster Collectible Figure is the Mark XLIII bust with LED light-up function inside the gigantic machine!

Today we are delighted to present the official photos of this feature in detail to you all. Enjoy!

You can pre-order Hulk and the Hulkbuster Iron Man at Sideshow Collectibles: