Launching an all-new collection based on the award-winning hit video game Batman: Arkham Asylum, Sideshow Collectibles is proud to present Batman’s most nefarious nemesis – the Joker!

Teetering over 24” tall, the deranged criminal mastermind is nearly bursting with glee, seizing control of the Arkham Asylum in what might be his most diabolical scheme ever. Sporting an impeccably tailored recreation of his weathered purple pinstripe suit, the self-styled Clown Prince of Crime waves his ‘Ace of Spades’ revolver in one hand, while the other conceals more tricks up his sleeve.

With one look at the maniacal glint in his eye and disturbing smile etched across his face, you can almost hear Mark Hamill’s lilting voice deliver the Joker’s jeering taunts, as Gotham City’s most sadistic villain positively sways in anticipation of going face-to-face with Bats once again. And surely, it won’t be long before the Dark Knight is on his way… 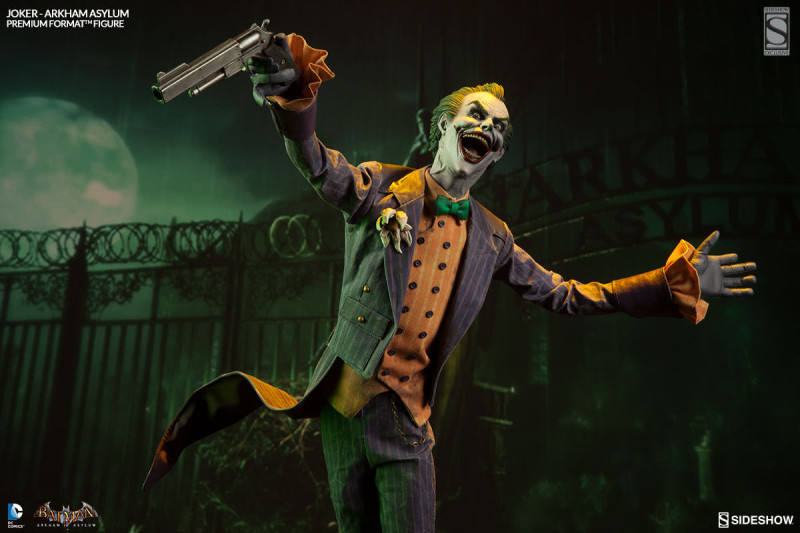 The Sideshow Exclusive Edition will also include a swap-out laughing portrait (shown below). Miss it, and the joke’s on you!

Get a sneak peek behind the scenes here:

The regular and Exclusive editions of the Joker Arkham Asylum Premium Format™ Figure will be priced at $449.99. Pre-orders begin this Thursday, April 16th.