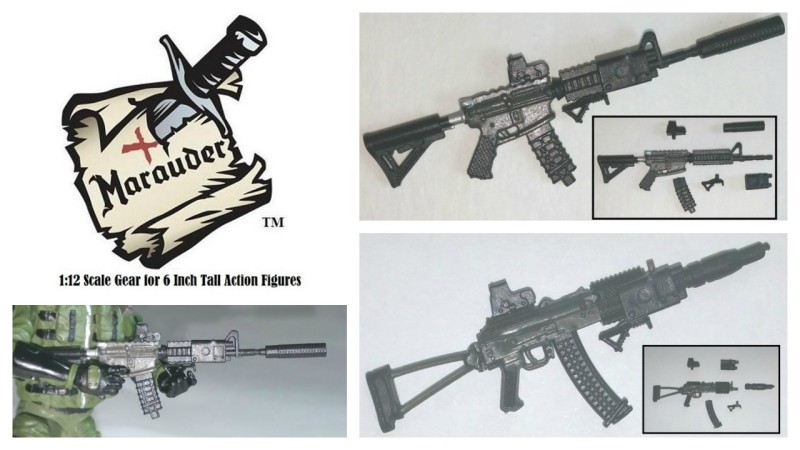 Marauder is best known for their work in the 1/18 or 4-inch scale. They’ve been in business for about a decade and have produced a lot of weapons and accessories for military figures, like G.I. Joes. Last year, they raised almost $250K on Kickstarter for the Marauder Task Force, a 4-inch scale action figure line featuring a modular system that allows for a lot of easy customization. (Boss Fight Studio, the group behind Vitruvian H.A.C.K.S., designed and sculpted the figures.)

For their latest project, their fourth on Kickstarter, Marauder is returning to weapons and accessories, this time for 6-inch scale figures. One pledge level is for six weapons (4 unique rifles, a pistol, and an RPG) that would be an instant arsenal upgrade for a Marvel Legends Punisher, for example. Another pledge is an army builder pack (4 each of AK-47s, M4s, and commando rifles), great for if you want to give your AIM or Hydra agents some conventional weapons.

Marauder is known for their attention to detail and accuracy, and the weapons will be modular and customizable, via options that will be made available as stretch goals. They are looking to raise a modest $14K, and already have 28 stretch goals planned. To support this project, visit the Marauder GR 1:12 Scale Gear for 6 inch Action Figures project page on Kickstarter. The funding period closes on May 4. Thanks to @almostahermit for the heads up on this.

One thought on “Kickstarter Monday: Build Up Your Weapons Arsenal with Marauder’s 1/12 Scale Gear Project”