Suit Up With Isaac Clarke 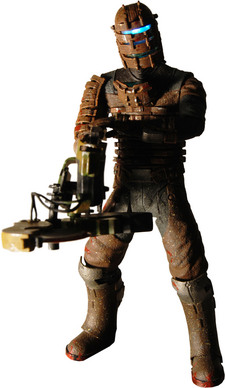 In Dead Space, it’s the 26th Century and you’re Isaac Clarke, an engineer sent to repair the interplanetary mining ship USG Ishimura, near the planet Aegis VII. Seems simple enough — another day, another dollar — until the whole thing gets shot to hell and you end up having to fight for your live against zombified Necromorphs while simultaneously uncovering a conspiracy involving the Church of Unitology and wondering just where your girlfriend, Nicole Brennan, who was assigned as a medical specialist to the Ishimura could have got off to.

Sounds like the makings of some serious trouble, but fortunately ol’ Isaac’s got a pressurized suit that along with keeping him alive, goes great with his plasma cutter, flamethrower and ripper. The EA game was a Game Informer game of the month and has picked up numerous awards for its sound design, atmosphere and overall quality. NECA is proud to reveal two new figures of Isaac Clarke based on his appearance in Dead Space.

Both the standard Isaac with the plasma cutter and the bloody variant with the ripper come with a light up LED mask and back and over 20 points of articulation. With ball joints at the neck, shoulders, wrists and ankles as well as ball hinges at the knees and elbows, left swivel biceps, a swivel waist and T crotch with hinged swivel hips, Isaac has the flexibility to take on whoever — and whatever — he might encounter aboard the Ishimura.

. Stay tuned to necaonline.com for more info on this and other lines from your favorite games and movies.

Visiting the NECA booth last week at San Diego Comic-Con, I was disappointed to not see more Teenage Mutant Ninja Turtles, and not until after the show did I find out why. I am not familiar with many of NECA’s licensed video game properties. Sure, I know Street Fighter, but my gaming in my old age is limited to NHL games. Still, there’s lots to appreciate here just from an action figure fan perspective.

Bio Shock – Industrial from TheFwoosh.com really dug these – he hasn’t played the game either.

END_OF_DOCUMENT_TOKEN_TO_BE_REPLACED

Coinciding with the release of Activision’s new open world action game, Prototype, NECA has released a figure of Prototype’s hero, Alex Mercer.  Given the character’s freerunning abilities, I would have hoped for a more articulated figure, but NECA has seemed to go back and forth on how much articulation they’ll be putting into the Player Select line.

The scene is New York City and a mutating virus has just been unleashed in Penn Station (how would you know? — heyo!). Alex wakes up in the hospital, unable to remember anything, but soon learns he has the ability to modify his genetic code at will and attains superhuman powers.

With some help along the way, Alex begins to unravel the conspiracy surrounding the release of the virus and ultimately clashes with the likes of the military and secret government enforcers, all the while battling through the hordes of deformed New Yorkers using his newfound strength, agility and shape-shifting.

The fate of the city and ultimately the world beyond is up to you as the player, but however it turns out, NECA’s Alex Mercer features his morphing bladed right arm and ball-jointed neck, shoulders, torso, and wrists, and comes in a collector-grade clamshell package — ready for the fight of his life.