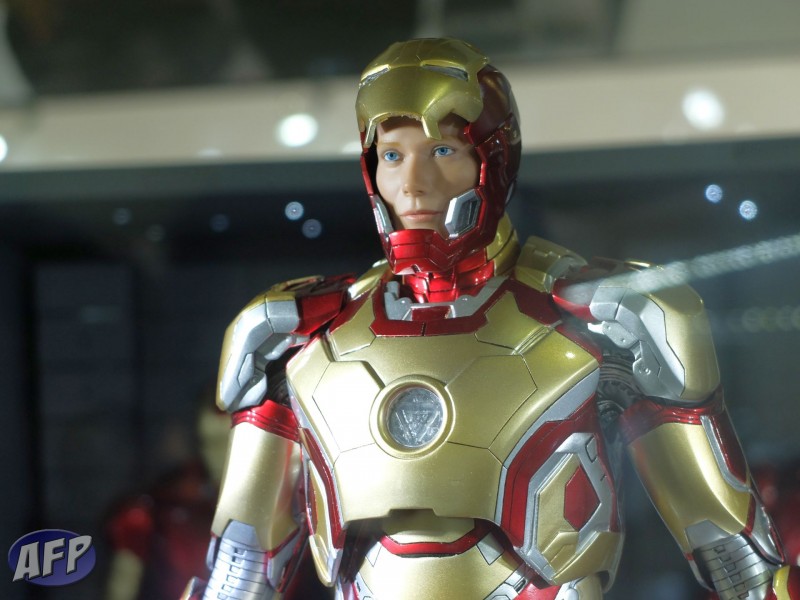 Jedd has sent in an update from the Singapore Toy, Game, and Comic Convention – he’s visited the Play Imaginative booth and shared this report on the Super Alloy Iron Man diecast line. I’m really amazed that PI is so aggressively targeting the Marvel brand that’s been Hot Toys’ bread and butter for the past few years. Jedd writes:

Play Imaginative trucked out an incredible display of practically every Iron Man armour that has been in the movies, in six inch scale (just prototypes at this point, there are no plans to release every last one). There were also figures in 12 inch scale and 18 inch scale, with a central display of an 18 inch scale Hall of Armour. The Mark VII figure comes with several heads, and what is interesting is that one of them is Pepper in the helmet; Gwyneth Paltrow’s likeness.

END_OF_DOCUMENT_TOKEN_TO_BE_REPLACED 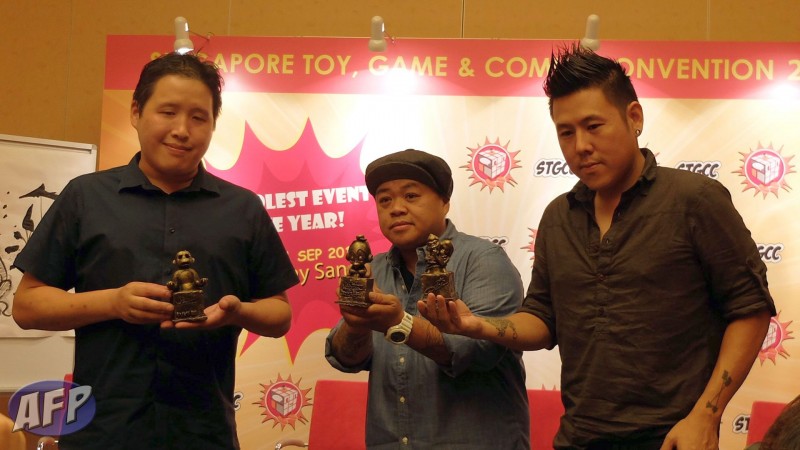 At last year’s Singapore Toy, Game, and Comic Convention, Jedd conducted a great interview with Max Toy Co’s Mark Nagata. This year, he shares with us a great conversation he had with with Angry Woebots, J*RYU, and Luke Chueh from the Army of Snipers. The Army of Snipers is an international collective of artists, with a wide variety of backgrounds including street artists, videographers, photographers, painters, sculptors, musicians, and graphic designers.

Angry Woebots, aka Aaron, started the group in 2011, and is well known for his designer resin figures and vinyl toys. J*RYU is a west coast-based sculptor and artist well-known for his Forest of Sorrows, the ongoing story of the ghost girl who haunts his works. And Luke Chueh is an award-winning graphic designer and painter active in the artist community in Los Angeles.

Jedd: Aaron, in 2008 you designed the album artwork for Fall Out Boy. If you could choose another musician to work with, who would it be and why?

END_OF_DOCUMENT_TOKEN_TO_BE_REPLACED 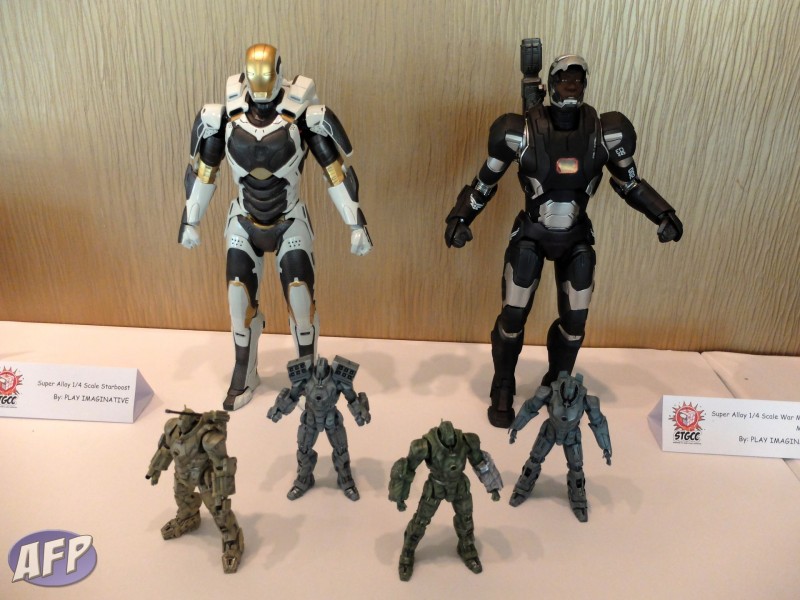 Our good friend Jedd was at the Singapore Toy, Game, and Comic Convention for their preview day, and sent in these pictures. He writes in:

Today was preview day for STGCC and I managed to get some pictures. I have a couple of pictures of Play Imaginative’s Iron Man stuff, including the 6 inch scale Hammer drones. The Hot Toys Exclusives at the convention are: Joe Colton from GI JOE Retaliation, The Iron Man “Midas” Armour, Evil Superman from Superman III, and “Star-Spangled Man” Captain America. There’s also a Metroplex Transformer that is being brought in by The Falcon’s Hangar store.

Thanks a bunch, Jedd!

END_OF_DOCUMENT_TOKEN_TO_BE_REPLACED

While we’re talking about the Super Alloy Iron Man figures, Play Imaginative has shared a preview of some of their figures that will be on display this weekend at the Singapore Toy, Games, and Comic Convention. In addition to the quarter scale Mark II War Machine, they’ll also have the quarter scale sub-orbital Mark 39 Gemini, which they’re calling the Starboost. It’s an interesting choice, because Hot Toys has shown their 1/6 scale Gemini but not yet made it available for pre-order.

Then there’s the 1/12 scale Hammer Drones from Iron Man 2, which are being shown for the first time at the show. 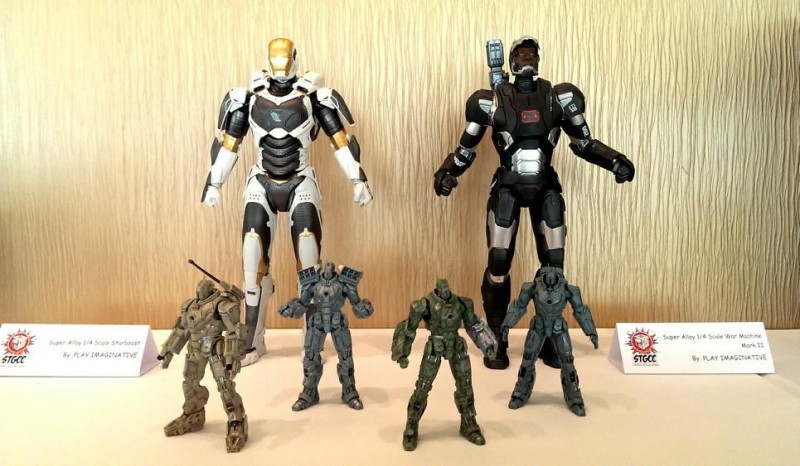 Our Super Alloy figures on display at the ‪#‎STGCC‬ media preview! 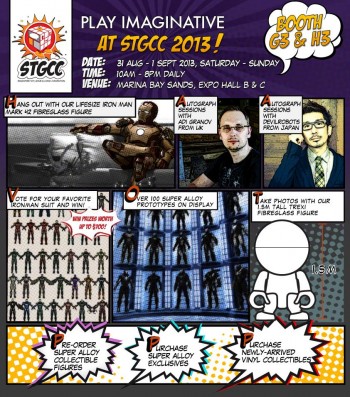 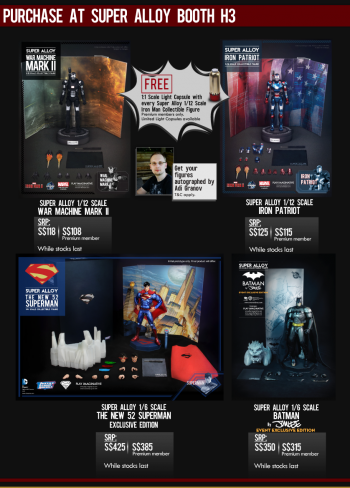 The Singapore Toy, Game, and Comic Convention is this weekend, August 31 – September 1, and Play Imaginative will be on site with its Super Alloy line of diecast figures that span both DC and Marvel. On the DC front, they’ll have both Superman and Batman from their New 52 Justice League 1/6 scale lineup for sale. And from Iron Man, they’ll have Iron Patriot and War Machine from Iron Man 3 in 1/6 scale – outside the US they’ve share rights for Iron Man in that scale with Hot Toys.

They’re also taking pre-orders for Green Lantern, some of their 1/4 scale Iron Man figures, and the 1/12 scale Mark 42. But new for this show are the Hammer Drones from Iron Man 2, in 1/12 scale. These will be up for pre-order for 115SGD, which is about $90, and are tagged as “event exclusives.” With all of the other Super Alloy figures, each event exclusive has been available for order with minor changes, so even if you can’t get to Singapore, you’ll probably be able to order the Hammer Drones through YesAnime, the US distributor for Play Imaginative.