Toy Guru was kind enough to resend answers that were lost in the cloud – well, at least 4 out of 5 of them! 😀

1. We were glad to hear that sales of the DC Universe Classics Color of Fear 2-pack were strong. Were they strong enough for you to consider additional multi-packs via MattyCollector.com? If not, what are you thinking about for exclusive DCUC product on MattyCollector.com? 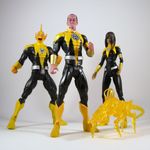 Unfortunately none of the DCUC 2 packs performed well enough to keep the assortment going in 2010. We are looking at other ways of bringing DCUC figures to Mattycollector.com, but there will not be any additional 2 packs at this time.

2. Exclusive DCUC products seem to be sought after by retailers but create angst for collectors. How have items like the TRU 2-packs, Wal-Mart 5-pack, and Wal-mart wave 10 performed? Are they equally strong across the board or do some formats work better than others? What can we expect for retailer exclusives in 2010?

All of the packs you mentioned have done very well. We’ll have some new items to reveal at NYTF in February.

We’re extremely excited about the possibilities of the WWE line. Mattycollector.com is a possibility but we are not ready to announce those plans quite yet! Stay tuned.

4. With your announcement of Evil-Lyn as the Masters of the Universe Classics April 2010 figure, the debate has really kicked in on preferred coloring. Is it a safe assumption that she’ll be released in the classic yellow-skinned coloring? With lots of fans of the 200X coloring, how much longer do you think we’ll have to wait for that variant as a bonus figure?

We do plan to eventually do both versions of Evil Lyn. Just which version will be released first will be revealed in the December issue of Toy Fare magazine!

[We know now that the Evil Lyn that was shown in Toy Fare and announced for April will follow the classic coloring – dark blue costume and yellow skin.]

5. In a previous Q&A, you mentioned that Club Eternia subscribers would be getting additional exclusive items beyond Wun-Dar and the map of Eternia. Any more details on that?

Be sure to visit our round-up posted yesterday for links to other Q&As from around the web.