The official launch date is January 1, but some stores have ignored the street date and WWE product from Mattel has hit the shelves. It’s fitting that for the launch of the line we’ve got a review of the Entrance Greats Triple H.

The pics and review are from Salem Crow. Thanks much!

Being a longtime wrestling fan, I’ve had my grubby hands on just about every style of wrestling figure that’s been produced over the years, and I happened to come across one of the new Mattel WWE figures this week – the Entrance Greats Triple H.

I like the packaging compared to some of the other bland plastic prisons on the shelves right now. The graphics give you the impression of the wrestler entering the arena with fireworks going off behind him, and the back has a nice image of this particular entrance, along with the Rey Mysterio figure out with him. The other feature is the “Try Me” opening on the right side, where you can test the theme music that the included base plays.

You can open the top of the package by slicing the tape on three sides, and then slide the entire tray right out. If you have purchased any Mattel figures recently, you’ll be familiar with the way their figures are secured. Triple H is secured with some clear rubber bands around his legs, and from wrist to wrist, behind the tray. Luckily in this case, there are no extreme poses that warp the limbs like some DC Universe Classics figures.

The major selling point of this line of figures is the gear replicating what each wrestler wore to the ring during a specific event. In this case Triple H comes in his “Conan” attire from Wrestlemania 22, when he faced John Cena. The cape is actually fabric, which I like better than plastic or rubber, which they could have used, and it hangs fairly well. He also comes with his crown, a chain around his neck, a belt and fur loincloth, and forearm guards. He also has knee pads that are painted a special way, but the pads are standard with the figure, this one just has a special deco.

There is no way that I can see to hang the cape on the figure (no straps or plugs of any sort), so for these pictures I kept one of the clear rubber bands across his back, and pulled the cape through one half of the band to hold it in place. The crown and chain fit well, and the crown comes off without much trouble. I assume the chain can come off as well, because I was able to adjust it but lifting on parts of his hair, so I assume if you get it over the back of his hanging hair, it would come right off. The belt and loincloth are one piece, and are fairly flexible. There appear to be 2 plugs on the back, allowing you to remove it for play, which is a nice feature. 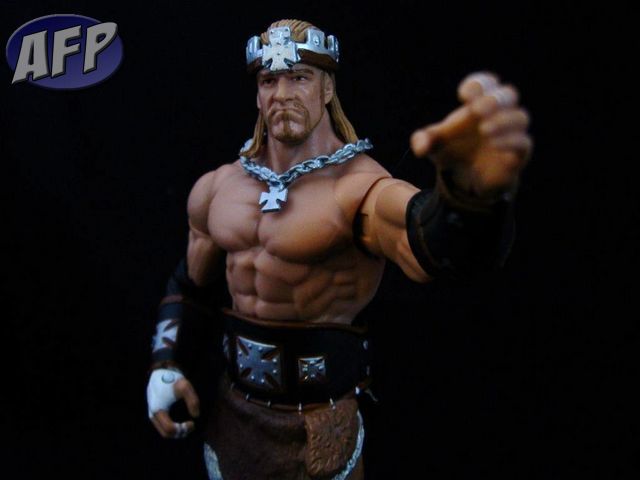 As far as articulation goes, if you’ve had any experience with the JAKKS Pacific Ruthless Aggression figures, you should be used to the articulation on this figure. He has a swivel (possibly ball joint) neck, which is restricted by the long hair of course. He has ball shoulders, cut biceps (at the top of the bicep), a cut waist, T-crotch, cut wrists with hinges, and hinged ankles. His leg movement is limited a bit by the loincloth, but I managed to get him to lean back in a chair I have with it on. Otherwise the articulation works well, and the new bicep design allows for better arm posing in front of his body, once you futz with the elbow pads.

The scale is 7-inch scale, which means these fit in with the JAKKS RA figures, but these figures look to have much better scale within the line itself, so guys like Big Show will be taller, and Rey Mysterio will be shorter, as he should be. I took some scale shots to show how he fits in with other figure lines. You can see that he is shorter than the JAKKS Deluxe Aggression Steve Austin and JAKKS UFC figure, but taller than Toy Biz Marvel Legends Spiderman and about the same height as the Hasbro Marvel Legends Lord Thor.

Overall, I consider this a worthy purchase, and I don’t regret it, though I wish the price were a bit lower. The reason for cost, I’m assuming, is partially for the music playing base, but it doesn’t even play the entire theme, so I would have been fine if it had been skipped. Now I want to see any number of the get-ups the Undertaker has worn over the years, namely the druid cloak and Ministry looks.

Thanks for looking, and enjoy the pics.