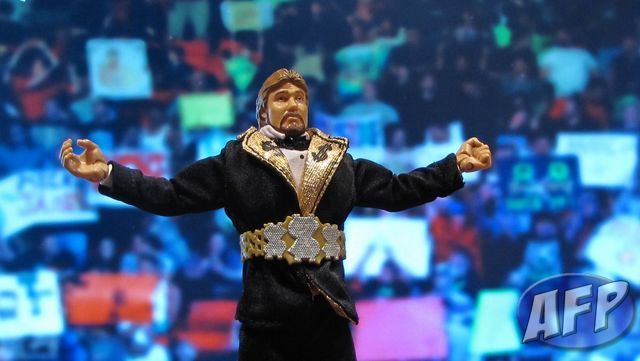 Everybody’s got a price. That’s something that the Million Dollar Man, Ted Dibiase, used to say during his promos, and in this case, my price was $24 and change for Mattel’s WWE Entrance Greats figure. Dibiase is one of my all-time favorite heels from the WWE, so when I saw his lone figure surrounded by Triple H and Shawn Michaels Entrance Greats, I had to pick him up.

He comes in the same type of packaging the other Entrance Greats have come in. There’s nothing to obscure the figure from the front and sides, so you’ll get a close look if you’re trying to pick from a few of these. I wonder if orders for this sub-line have scaled back, as there’s still plenty of Triple H’s to be had, but Dibiase and Rowdy Roddy Piper have been pretty scarce.

If there are going to be fewer of these figures out there, then theft is going to be a bigger problem. I haven’t seen it yet for this particular figure, but Piper and the Legends series 2 figures have been popular targets for switching out the new Mattel figures for old JAKKS Pacific figures.

The package allows access to the base for a “try me” version of Dibiase’s theme song. I didn’t read the instruction sheet that came with the figure, but if I had, I’d have known that a switch on the base toggles between the short and long versions.

One of the best features of this figure is that you get Dibiase decked out in his entrance gear – his custom tuxedo with the Million Dollar Belt. I think the lapels are a bit big, but other than that it gets the job done. I was expecting to have a more difficult time getting the clothes on and off, but they’re pretty easy to work with. The shirt (go Chippendales!) has an elastic neck band that makes it easy to get on and off around his head, and the shirt and pants have velcro sections in the back. I was surprised to find knee pads under there, and they don’t really hinder the clothes at all.

Of course, for the price, I think this line should include Elite and Legends styled articulation, but it matches up to the Basic line. So, no ab crunch and no ball-jointed hips. Just a t-crotch here

I’ve talked to some of the folks involved in making the WWE figures, specifically about some of the head sculpts. Especially with earlier figures, I find some of the expressions blank and devoid of any emotion. I think Dibiase falls into this camp – I would have loved to have a trademark sneer on his face.

I’ve been told that at least at the start of the Mattel / WWE relationship, it was the WWE that asked that Mattel refrain from making angry faces. That must have been relaxed somewhat as the line progressed, because many of the newer figures show a lot more emotion in their head sculpts. Maybe Dibiase will get a second figure (like Piper has) in the Legends line – he deserves a better expression and the added articulation. 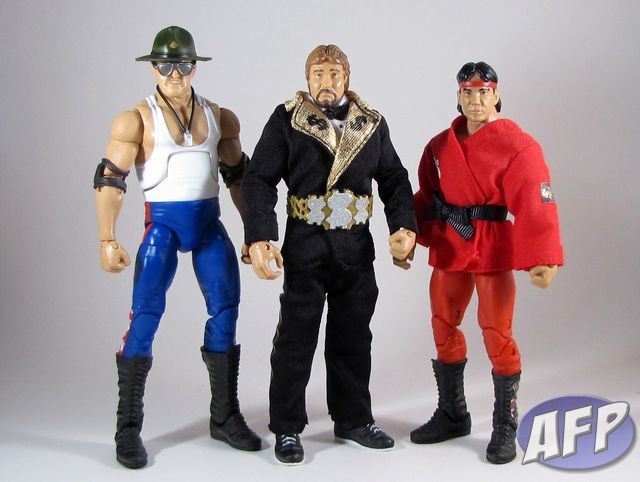