The SOTA auction for the one of a kind Lightning Blanka statue is now live. All profits from the auction will benefit victims of the earthquake in Haiti, via the Red Cross. The auction ends February 4 at 9AM PT.  Bid now! 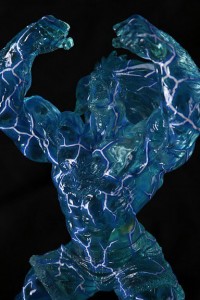 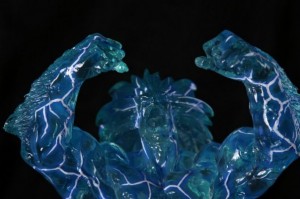 In lieu of the terrible events in Haiti, SOTA Toys has decided to auction off a prototype statue (no reserve!), with ALL profits to be donated to the Red Cross relief effort. This one-off piece, affectionately known as “Lightning Blanka,” is a clear resin statue tinted in blue with lightning arcs painted over the body depicting the character Blanka from the renowned video game series Street Fighter, made by CAPCOM.

It features the same pose as the statue SOTA Toys manufactured and released in 2007, however this particular piece is a concept prototype that was produced but has never gone into production. And after this auction, it never will. As a part of this auction, the winner will receive a certificate of authenticity as well as free shipping to anywhere he or she desires.