Better late than never? Since I missed out on Stratos the first time around, I figured I’d do a pictorial review of him now that I finally have him with his recent reissue at Mattycollector.com. (As of this writing he has since sold out again.) Let’s have a look, shall we? 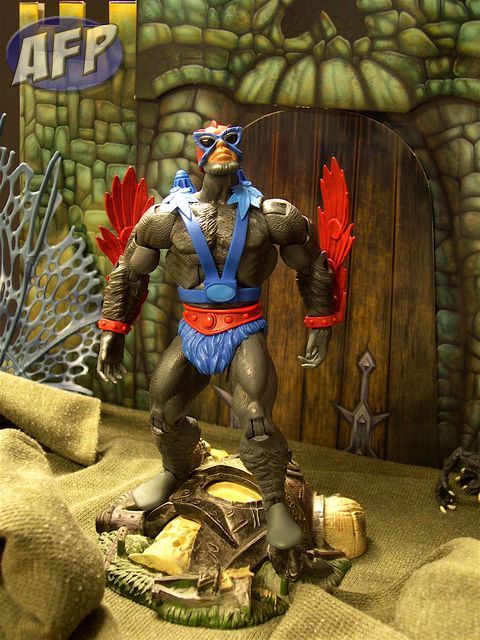 Good ol’ Stratos looks great. I know he uses the Beastman body but Mattel did a great job of not making it so obvious! (See thumbnail pic way below.) They do have different feet, left hands and, of course, head sculpts. When he first came out, I read a lot of people weren’t too keen with how simple he was, being just a grey body with a few red and blue costume details. Personally I think he looks great. He holds his own with the other Masters and his color scheme stands out.

I love the way they did his face. He’s got a bit of a smile showing there, and his goggles have that glossy  paint application. One nitpick though is I wish they had painted the roots of his beard a little bit darker, just to separate his beard from his face, it kinda looks too clean of a break for me. 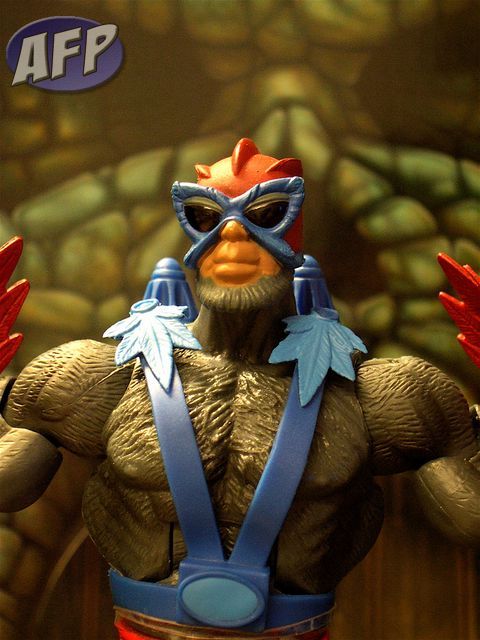 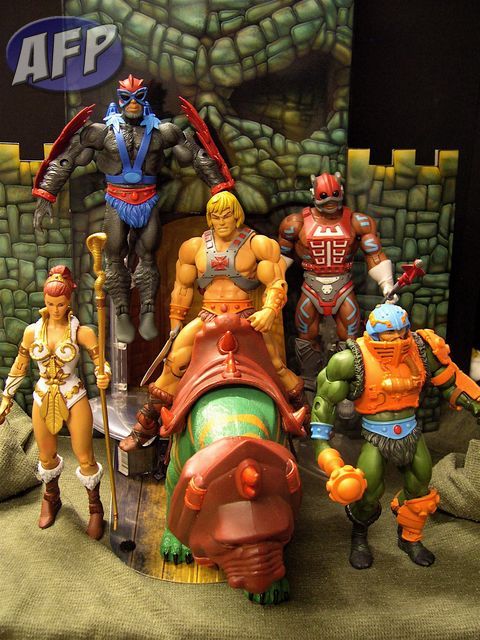 Of course the only difference he has with his first release is the “original” yellow label on the package. 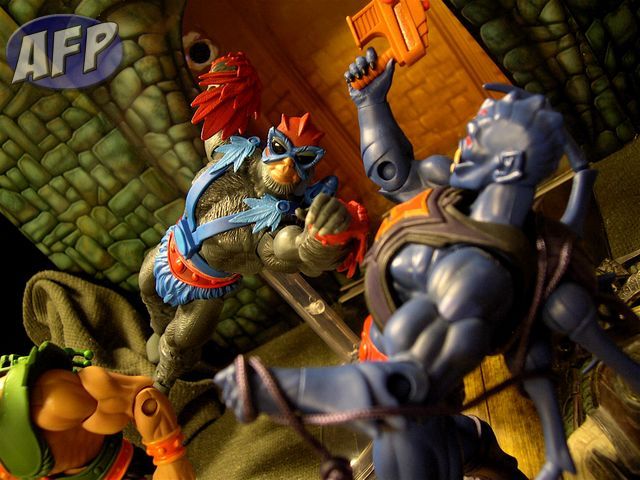 I got Stratos into some pretty neat flying poses with the help of a flight stand. He’s got the standard MOTUC articulation, sans the boot swivels that the others have – because I guess he doesn’t have boots? In the Filmation cartoon he does have red boots, and design-wise I think that’s the only thing missing from Stratos, some sort of color detail of red or blue on his lower legs. As an added note: they’re releasing a red version of his rocket harness in the upcoming Weapons pack.

I do wish his arm wings could rotate, that would have given him some additional posing options, but it’s no biggie. I’ve seen some tutorials on how to take them apart and make them articulated, which is a little bit risky as they’re glued in place, but if you’ve done some customizing it shouldn’t be a problem for you. It doesn’t bug me enough to risk my figure though! 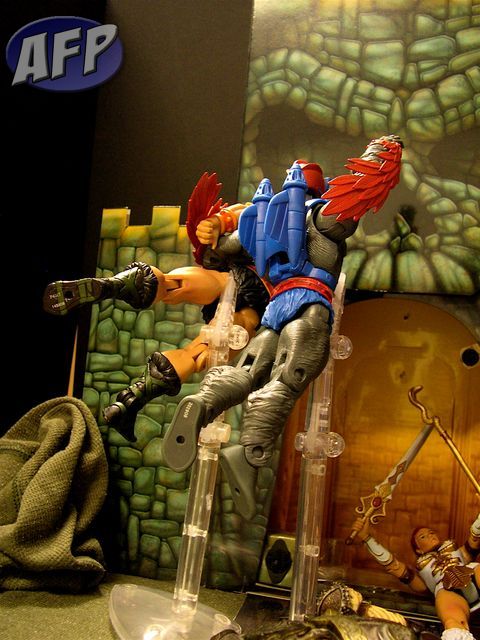 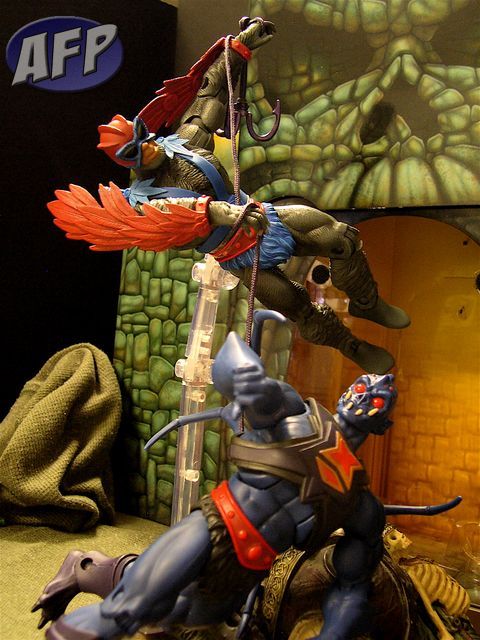 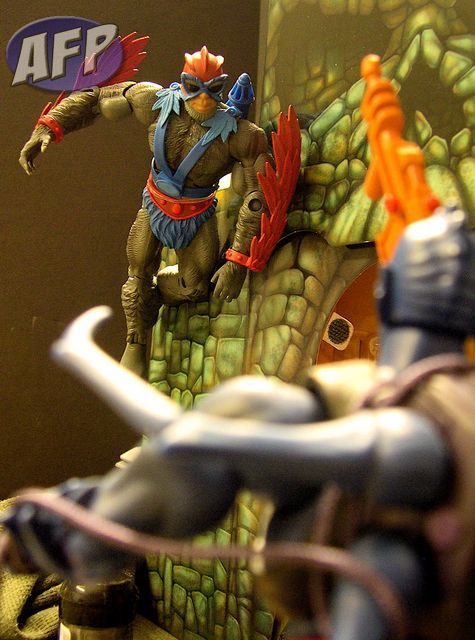 Look at Stratos flying around catching bad guys and stuff! I had fun trying to figure out how he would do battle against Skeletor’s henchmen. He needs a staff or something to bash his enemies with. He pretty much flies around, although I do remember him shooting force bolts of some sort from his hands in the old cartoon! 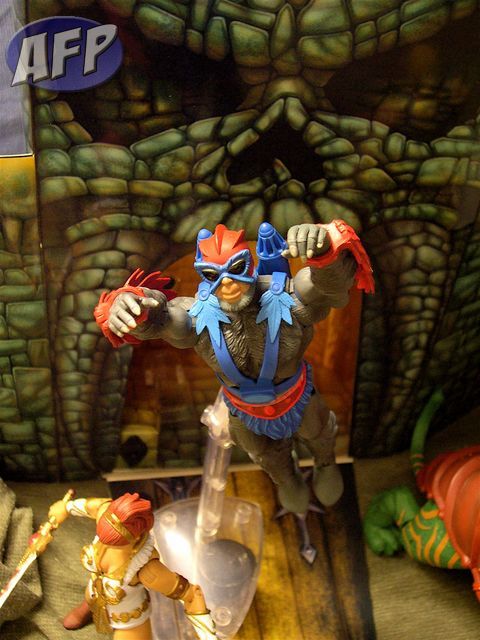 So there you have it, the flying simian Stratos! I’m not sure if they are re-issuing him for a third time. Hopefully those who wanted him got a chance to pick him up – he was only available this time for a couple of days at MattyCollector.com. If the Toys R Us 2-packs are successful, maybe we can see him paired up with Hawkman or something!

2 thoughts on “Masters of the Universe Classics Stratos Re-Issue”