No Magic 8-Ball this time around – here’s the straight up answers from Toy Guru and Mattel. Thanks guys!

1. If the demand for Masters of the Universe Classics at mass market is strong enough to support a retail line, what would that mean for MattyCollector.com and the long-term plan for MOTUC ? Would you want to continue the MattyCollector program with monthly releases with the long-term roadmap intact, or would you have to pull some figures forward to build out the mass market assortments? 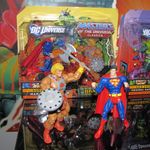 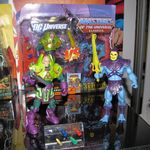 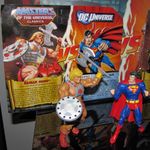 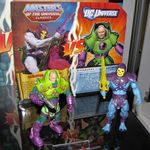 If we ever brought MOTUC to retail, it would most likely be only in a movie year and would only be re-releases and repaints with fewer accessories (one head only, one weapon only) within a new pack-out pose in order to keep the original releases special . The plan, at least now, would be to continue the new figures with multiple heads and multiple accessories on a monthly basis on Mattycollector.com, even if re-releases are available at retail.

2. I think that for many collectors, one of the few big hitters that could make DC Universe Classics even better would be if figures character choices were better aligned with events in the comics. Some toy companies have mentioned working closely with editorial from comic companies. What’s preventing Mattel from working closely with the editorial staff at DC Comics?

DC Direct offers figures on a closer book-to-shelf relationship. For Mattel, we learn about the new figures at the same time fans do and it takes 12 to 16 months to go from concept to figure on shelf.

3. It seems like every toy company that makes action figures has also started making vinyl figures. What happened to the Attitubes we saw last year at San Diego Comic-Con?

There wasn’t enough interest and buzz from fans to go into production. If this is something fans are interested in, we need to hear about it!

4. It’s tax day in the US. What do you think about an Irwin R. Shyster figure for the WWE line?

Ha! That would be awesome, but right now there are no plans for this; however, maybe one day.

5. What are the chances of getting figures based on expanded universe type characters, such as girl Ghostbusters from the recent IDW comics or Extreme Ghostbusters?

This is something that has come up quite a bit and we’d love to tackle it. We know collectors are big fans of female figures.