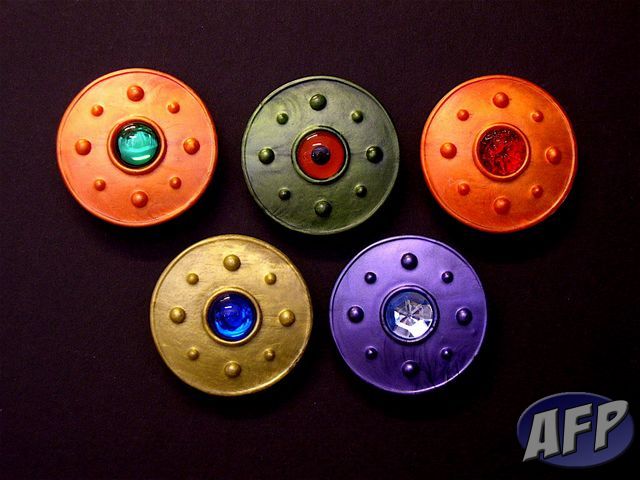 Spy Monkey Creations has given us an early look at their Shield of Destruction and Shield of Deliverance, which are available starting today. These shields are designed to complement any 6 or 7-inch action figure line, but as you can see from the pics, it is obvious that these shields were inspired by the Masters of the Universe Classics toyline. The colors and deco match certain characters of MOTUC, and the design/look of the shields perfectly blend with the figures.

The shields have a diameter of about 2 inches, and are cast in sturdy, metallic-colored plastic. There is one base sculpt for all the shields, but they come in five different colors, and each has a different jewel/gemstone setting at it’s center. This creates a unique look and attitude for each shield. 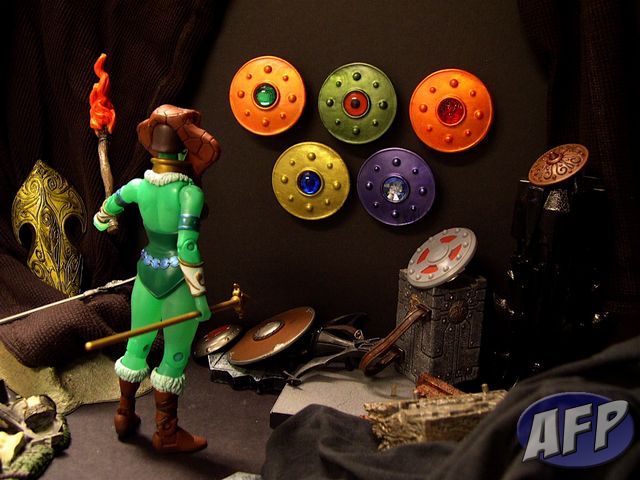 Let’s have a look at the Shield of Destruction and its’ three versions!

The Blue Venom shield matches well with Skeletor. The purple color of the shield is a close match to Skeletor’s armor and sword. This shield has a clear, diamond jewel setting, with a very light blue tint to it. 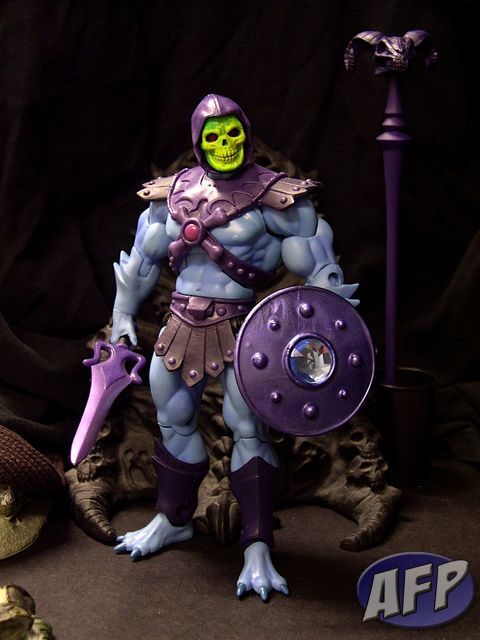 The shield that I received had some imperfections on the colored plastic, which I rather like as it makes the shield look like it has been used in battle. The shield is still smooth, it just seems like the metallic pigment on the plastic “streaked up” in certain parts. 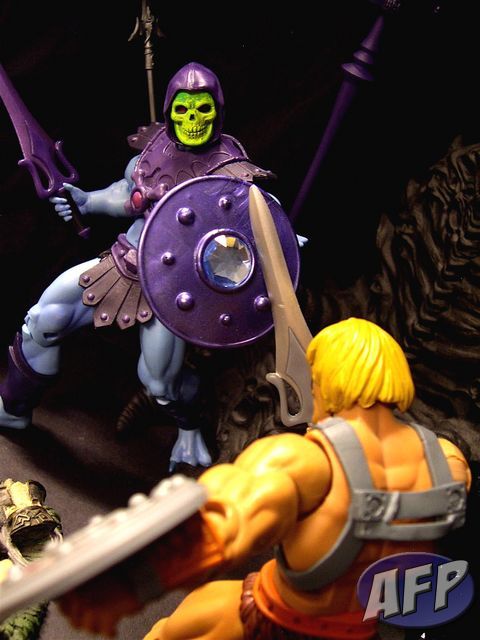 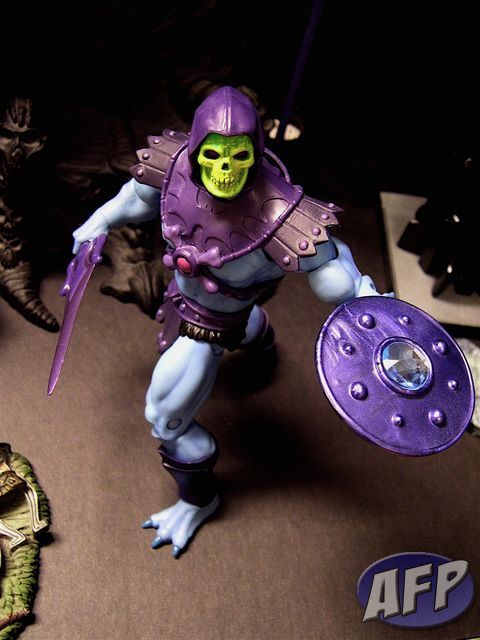 THE SHIELD OF DESTRUCTION: EYE OF DOOM VERSION

The Eye of Doom shield looks tailor-made for Tri-Klops. The metallic green, and orange iris setting matches really well with his outfit. 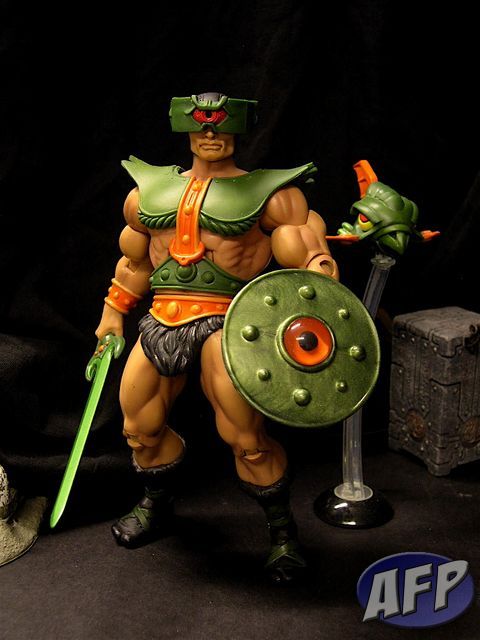 This shield is my favorite of the bunch. The iris setting really gives it an interesting look, like it’s somewhat alive. Again, there are textures in the plastic color pigment which makes it look like it is made out of green metal.

I matched this shield up with Beastman as well. I figured if this shield was alive, it would be one of Beastman’s pets. This shield reminds me of one of those DC Starro creatures! 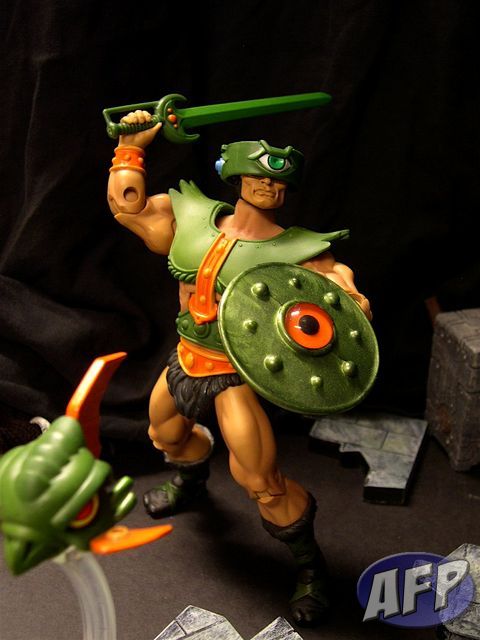 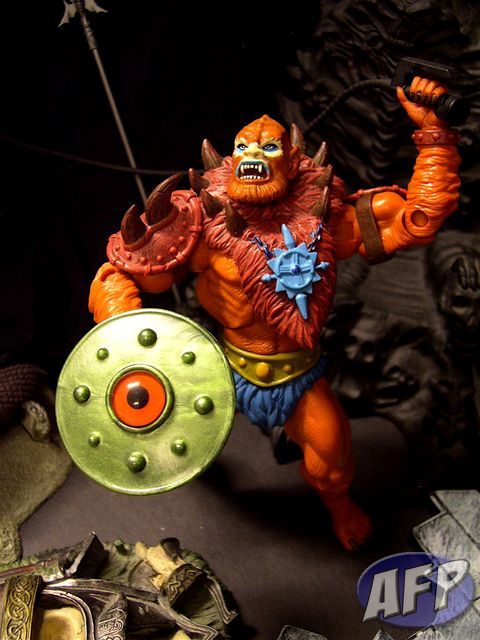 From the name itself, it seems this shield was designed to match He-Man’s doppelganger, Faker. Unfortunately, I don’t own a Faker yet, so I have Webstor handling this shield for now, and I think it matches his color scheme as well. The center setting is a red, translucent rock-like gemstone. 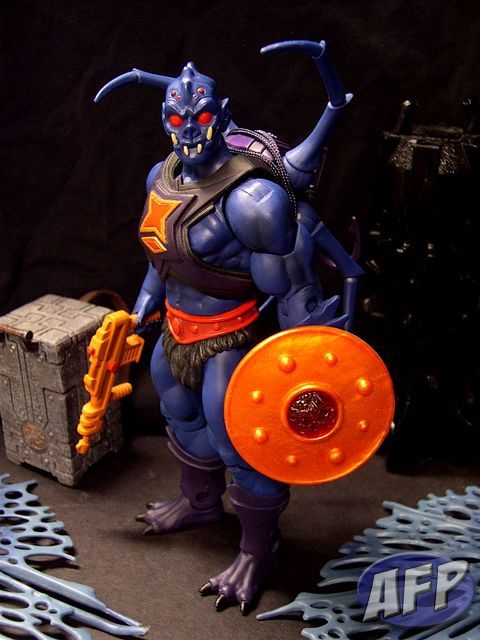 This shield is another favorite of mine, mainly due to the rock gemstone. I like that the gemstone has a lot of texture and is not as polished like the others. It gives it a rugged characteristic and also creates some story potential, maybe it is some sort of lava stone that makes the shield resistant to fire or something.

Also, because of it’s rugged gemstone and it’s orange coloring, it looks like a shield Beastman could also use. 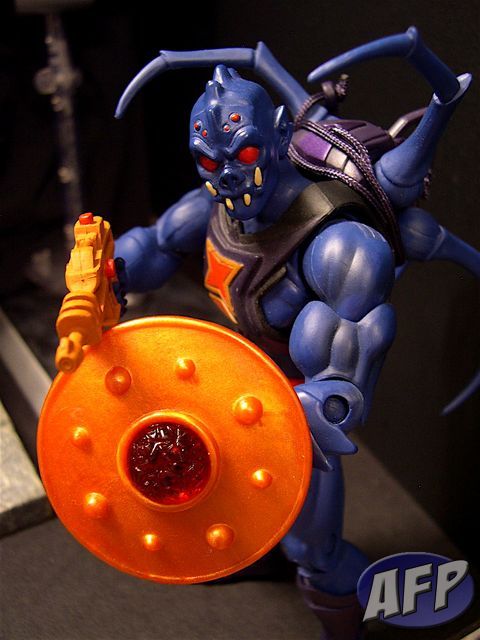 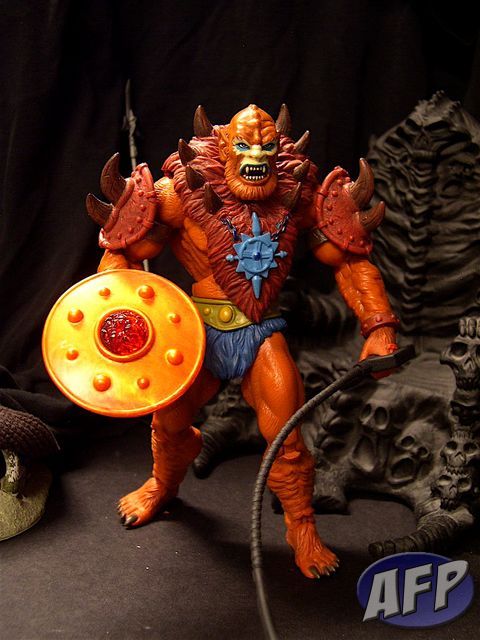 Next, let’s have a look at the two versions of the Shield of Deliverance!

As the name implies, this shield is perfect match for King Randor. The gold color and the circular studs repeat the details of his costume. The blue crystal setting also matches the blue details of his sword, staff and cape. The repetition of shapes and color create a unified look. 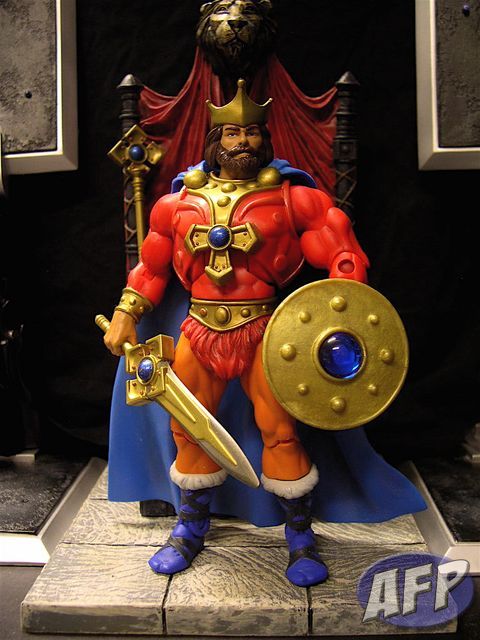 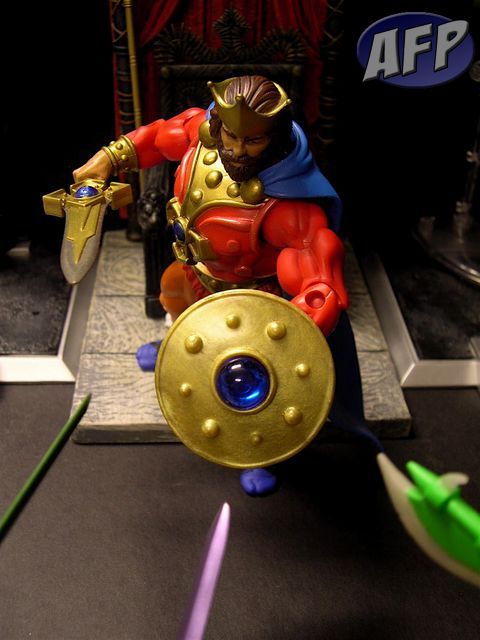 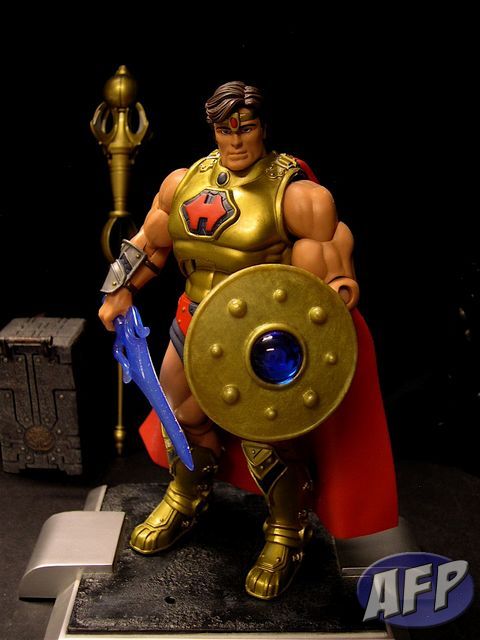 Finally we have Man-at-Arms’ match, the Weapons Master shield. This shield is similar to the Golden Royal version in appearance, differing only in color. The jewel in this case is green to match Man-at-Arms’ green outfit, and the metallic orange matches up really well with the metallic details on his orange armor. 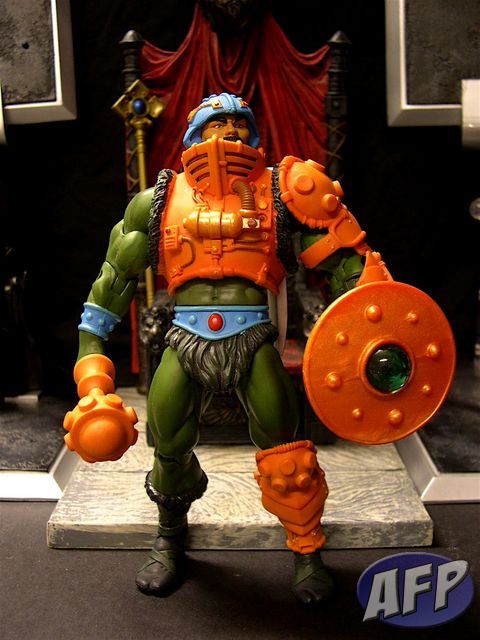 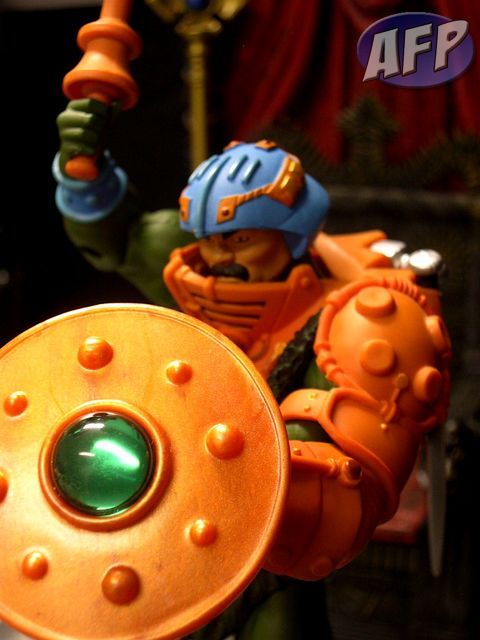 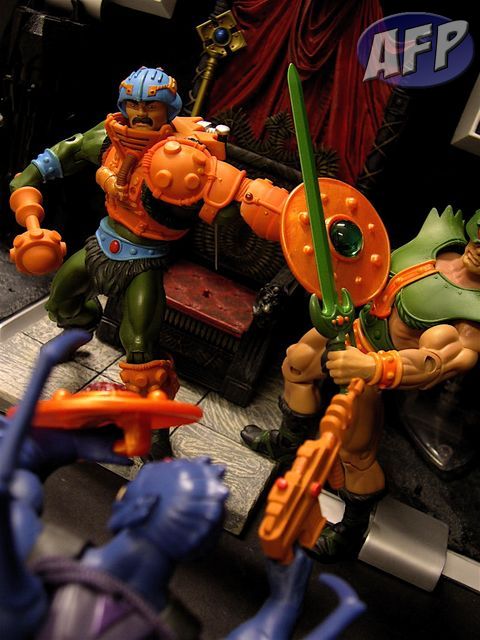 I have to say, these are quality accessories which look great with the Masters of the Universe Classics line. The plastic feels really sturdy, and they look like they were made by the Four Horsemen themselves. I like the choice of metallic colors for the plastic and the colors match the characters really well. The different jewel/gemstone settings is a great idea to make each shield unique and different from one another. The circular stud design is a good choice as this is a repeated design element around the MOTUC characters, especially on bracelets and belts. I like the simple shield design, but I would have also liked to see some paint variations on some of the shield’s rims and studs.

I also like how stable the shield is when the figure is holding it. I find that the clip-on shields of He-Man and Teela awkwardly fit on their wrists (He-Man’s even has white stress marks on the clip).

One nitpick I do have is the choice of jewel for the Blue Venom Version of the the Shield of Destruction. For Skeletor, the jewel seems to be too delicate for him, not exactly matching his skeletal and jagged edge theme. The diamond texture seems to be a better match for somebody like She-Ra. But then again, the shield doesn’t specifically say it is for Skelly, so I guess I can’t really fault them for that one.

The Shield of Destruction and the Shield of Deliverance are available starting today at Spy Monkey Creations’ online store, priced at $10 each. Now, this price might seem a little high for an accessory, but since these are custom accessories and they cast these themselves, without the lower prices of bigger production runs and overseas factories, I’d say the price is justifiable.

Thanks for looking and I hope you all enjoyed the pics!!! 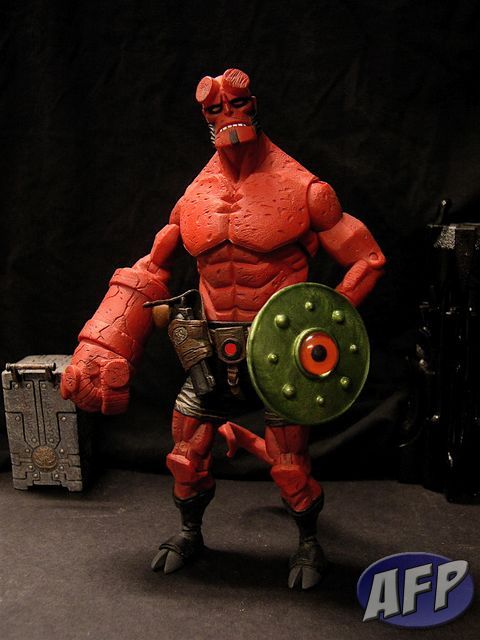