A couple of days ago we posted a lineup for DC Universe Classics wave 15 we saw at an online retailer. Today, Mattel posted some pics of wave 15 confirming the lineup, as well as revealing upcoming JLU singles that are exclusive to Target.

Legion of Super-Heroes villain Validus is the Collect and Connect figure for wave 15. What are your thoughts and reactions?

Oh DCU, how do we love thee? Let us count the ways… let’s see, Wave 1, Wave 2, Wave 3… Wave 15! Yep, Wave 15 is coming to retailers late this summer. You’ll find these figures first at Kmart in late August/early September, then retailers everywhere in the fall. Collect all seven figures and you’ll have everything you need to create a villainous Validus Collect and Connect™ figure! 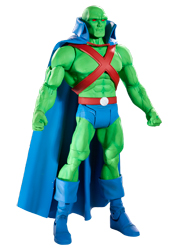 And since we’re on a roll counting ways we dig DCU, let’s talk about the five JLU singles coming to a Target store near you later this year:

When we get more information on release dates, we’ll let you know when you can expect to find these DCU must-haves. Until then, happy hunting!