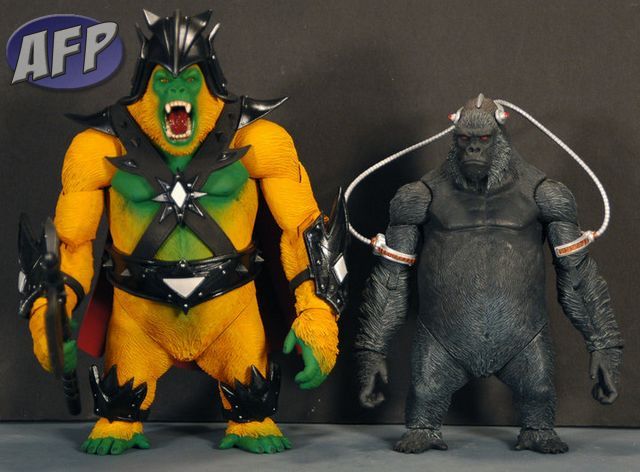 When we saw him at Mattel’s Masters of the Universe Classics Toy Fair event, I know a lot of people thought that Gygor was based on the Collect & Connect Gorilla Grodd from the DC Universe Classics line. Nope – it’s a totally unique sculpt! Giant gorillas are great – I can’t wait to size Gygor up against Grodd, the Kriegaffe from the Mezco Hellboy line, and the Monkeyman BAF from the Legendary Comic Book Heroes line from Toy Biz!

Originally based on the “Big Jim Gorilla” (much like Battlecat or Zoar) Gygor was set to be a large gorilla figure in the 1982 line. While he was cut due to logistics, we are proud to present the first ever MOTU Gygor figure in the new Classics line. Truly, this is what the MOTUC line is all about.

Gygor will be the third oversized beast in the 2010 line and will go on sale September 15th. He will not be part of the subscription (but the beasts will be added to the subs in 2011 per fan demand!)

One thought on “Masters of the Universe Classics Gygor Preview”