I’ve been on a Hasbro streak lately with G.I. Joes and Marvel Universe, so I thought I’d shake it up a bit with a figure that I’ve had since Comic-Con. Today we’re taking a look at Toynami’s 2010 SDCC exclusive 4-inch Sage Mode Naruto! This was the first figure I bought at the Con, and as soon as I got back to my hotel room I immediately opened him up! I’m a big fan of the anime, and I’ve  been waiting for a decently articulated figure of Naruto ever since I got hooked on the show.

For those not familiar with the anime/manga, Naruto is the story of an orphaned boy who has a powerful fox demon sealed within him. The Nine-Tailed Fox Demon caused much destruction and death when it attacked the Hidden Leaf village. In order to stop it, it was sealed away in a baby named Naruto. Considered dangerous and a curse by the villagers, Naruto is treated as an outcast, and grows up to be a troublemaker and a screw-up. The story shows how Naruto, a young ninja boy in-training, overcomes these challenges, through hard work and perseverance, to fulfill his dream of being Hokage (the Hidden Leaf’s village leader) one day. It is an awesome underdog story full of ninja battles, rivalries, legacies and themes of hard work, perseverance and redemption. The characters are very well developed and the ninja battles are epic! As with most anime, some of the story arcs might drag a bit, but the overall story is very good! The story has two parts so far, the first is Naruto, his story as a young boy, and the second part is Naruto Shippuden which fast forwards 3 years later to him as a 16-year old ninja. This figure is based on Naruto’s Sage Mode appearance (it’s kinda like his version of a Super Saiyan ala Dragon Ball Z) in the recent Pain storyline in the Naruto Shippuden anime.

Mattel came out with a line of toys a couple of years back for the Naruto anime shown in the Cartoon Network. I never bought any as I thought they didn’t capture the characters well enough, and I didn’t like the articulation. Toynami snagged the license for Naruto Shippuden and has been releasing 6-inch figures which are pretty much statues as they have no articulation at all. At this year’s SDCC they finally showed some 4-inch highly articulated figures for Naruto Shippuden, which made me really happy!

Ok, enough with the history lesson and on to the Pic Review! (Note: For those following the English version of Naruto on Nicktoons, which is way behind the current anime in Japan, this review might mention some spoilers, so be forewarned!) 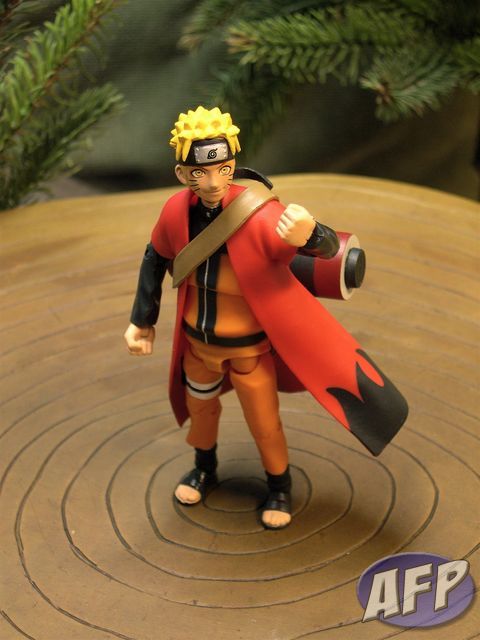 Naruto here is garbed in his Sage Mode costume, with the coat similar to the Fourth Hokage’s coat. He also has the eyes and eye markings of the Toad Sage Transformation. He carries a summoning scroll for summoning Toads and his Senjutsu clones. He measures about 4.5 inches, pretty much in between the more common 3.75-inch and 6-inch scales. Toynami, in their press releases, refer to this line as a 4-inch scale line. I don’t mind this scale but I do see other people having a problem with it being in between common action figure scales. But then again anime action figure scales are kinda all over the place if you consider the differing scales of Figmas, Revoltechs, Play Arts, Figuarts, etc.

Naruto comes with 3 pairs of interchangeable hands: fists, kunai-wielding hands (the kunai are not detachable), and seal formed hands (which is sculpted so you can do Naruto’s Shadow Clone Jutsu seal). Included also are his aforementioned Summoning Scroll, removable coat, and a clear figure stand. The interchangeable hands are very easy to switch, in fact, most of his body can be taken apart easily as you can see in the pic below. Taking off his coat is also an easy task as it just involves detaching his arms, his coat is made of soft flexible plastic so it comes off easily. 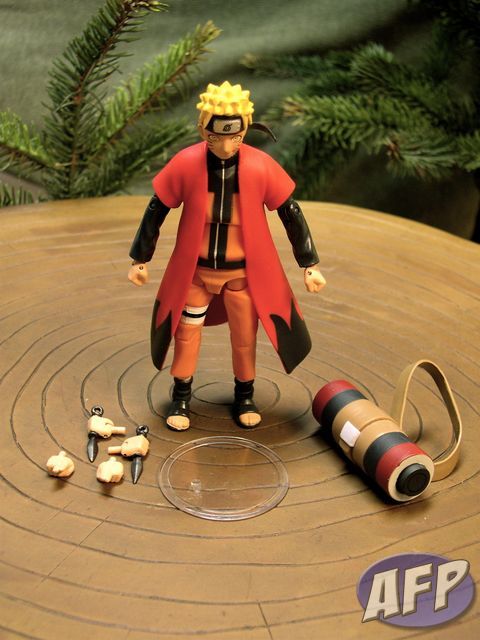 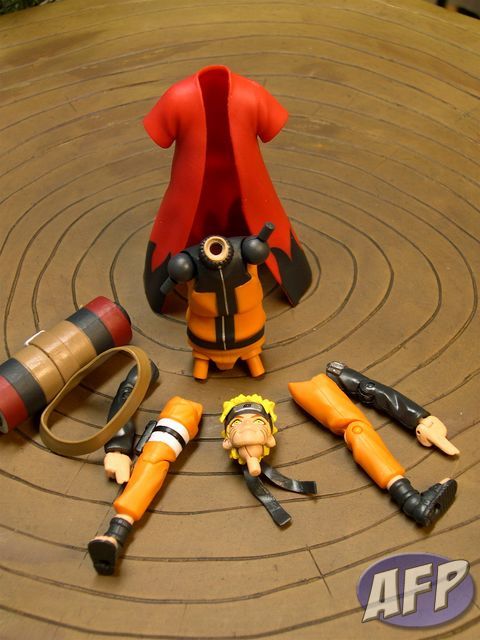 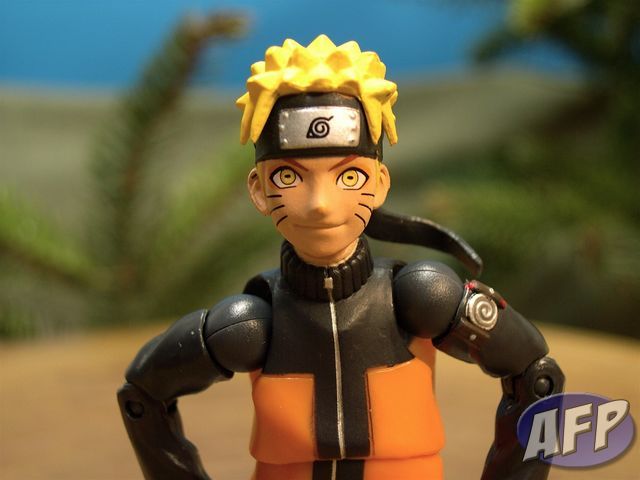 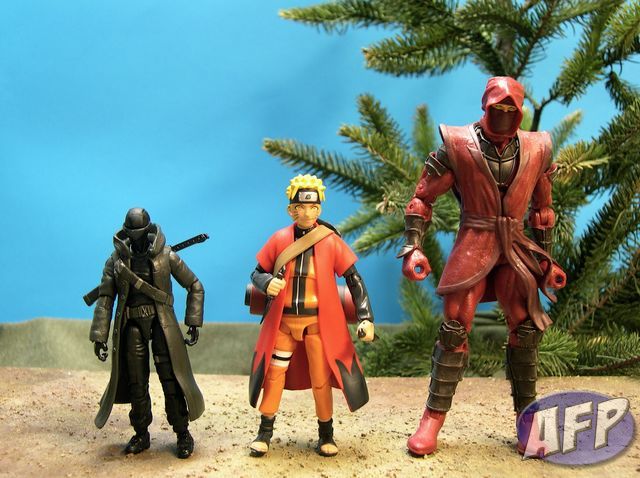 I like the sculpt of this figure. His headsculpt captures his look and attitude in the anime really well. Considering how difficult it is to translate 2D animation to 3D, I’d say they did a good job. Toynami went with the very spiky hairdo that they’ve been doing on the 6-inch line. I think translating Naruto’s hair in 3D is pretty difficult as his hair in the anime is pretty much a flat shape with some jagged outlines.

I’ve been comparing his sculpt to the anime, and this sculpt resembles his look at the very start of Naruto Shippuden. He looks a bit younger and his body proportions are shorter than in the current anime episodes (which is up to episode #179). When he finally masters Sage Mode and uses it in battle for the first time, he has longer body proportions (he’s grown from the first episodes!) and even the proportions in his face have changed a little. His eyes seem smaller and he has a longer face. Since these episodes are pretty recent, and Toynami had to produce these ahead of time, I could see how it is not as accurate as can be.

His costume is sculpted really well, with just enough folds and creases without being overly detailed. This is after all based on an animated character, where details are simplified. 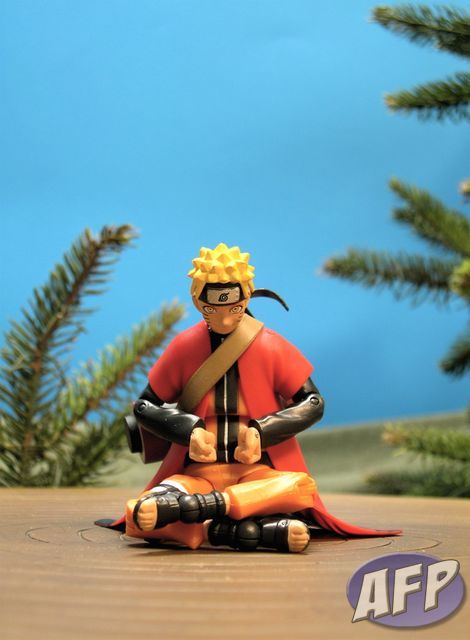 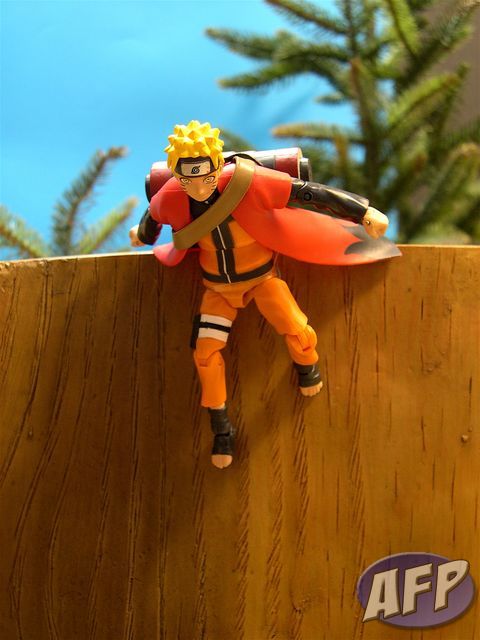 Let’s talk about his articulation. His head rests on a joint similar to that of a Revoltech joint (minus the ratchets), where there’s a hinge ball with pegs on both ends. He can look up, down and side to side really well, but you have to fiddle with the joint to get the effect of diagonal tilts. His shoulders use a similar articulation joint, except instead of pegs on both sides, they use an actual ball/socket joint on one end, where it connects to his torso. This adds more range in moving his shoulders inward and outward. He also has bicep swivels, hinge elbows, and swivel hinge wrists. They used a ball joint for the ab articulation, so it moves front/back and side to side. He has a swivel waist (with very restricted movement), ball/socket hips on a dumbell, swivel upper leg, hinge knees and that pegged hinge ball makes an appearance again at his ankles (which produces some great movement down there).

Overall, you can do some great ninja poses with this articulation model. The beauty of the detachable joints is that when you reach the movement range limit of a certain joint, you can pull it out a bit so you can get some extra range. I did this a lot on his head and hips for some of the poses. Also of note is that they used a softer plastic for his pelvis/crotch area, to add some more flexibility. His Sage Mode coat is made of soft, flexible plastic, but it still restricts some arm movement. You really can’t lift them up with his coat on.

Double-jointed knees and elbows would have been great to see, but they made enough clearance on the elbows and knees to get some good range of movement. 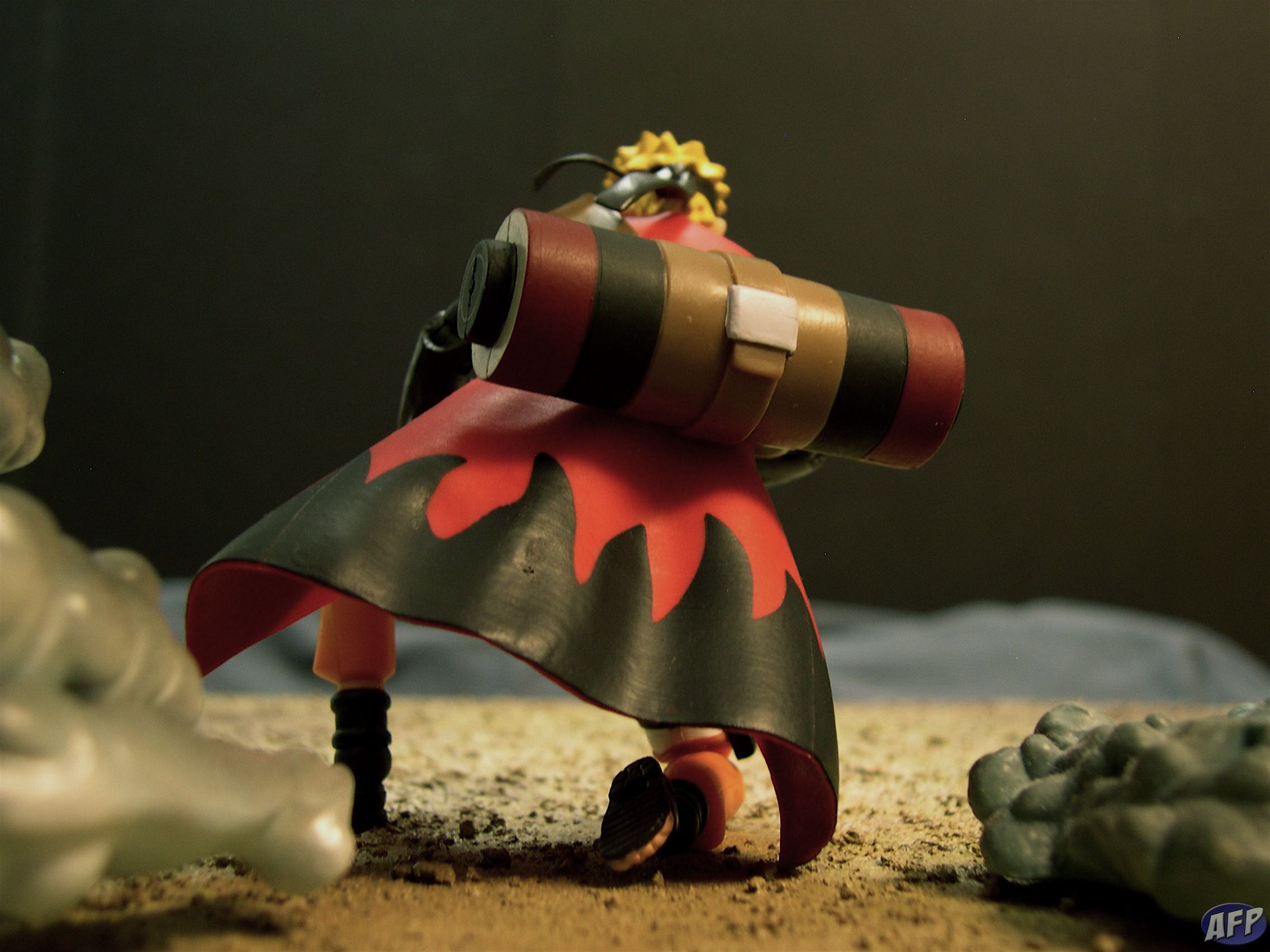 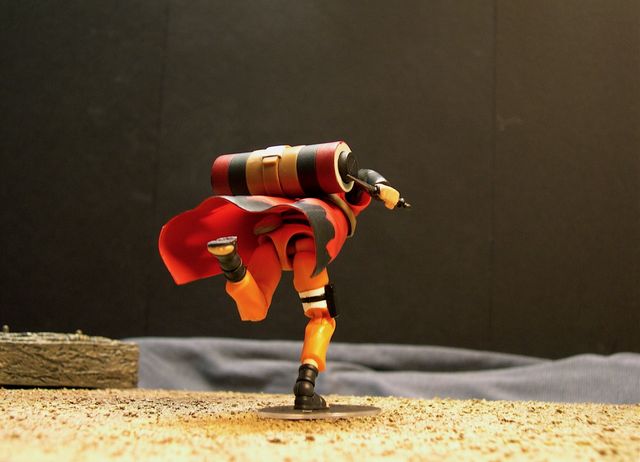 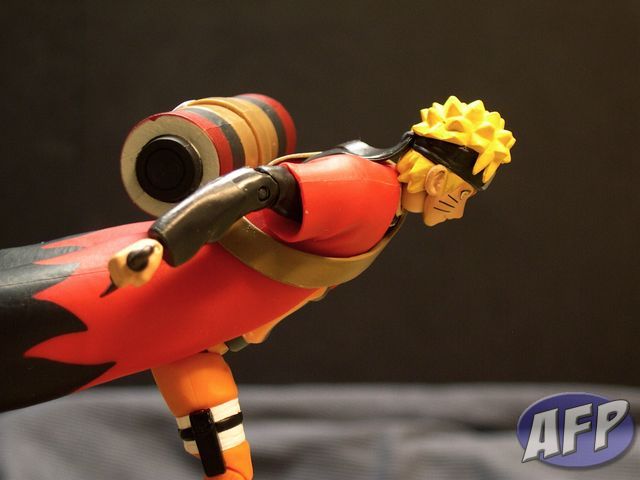 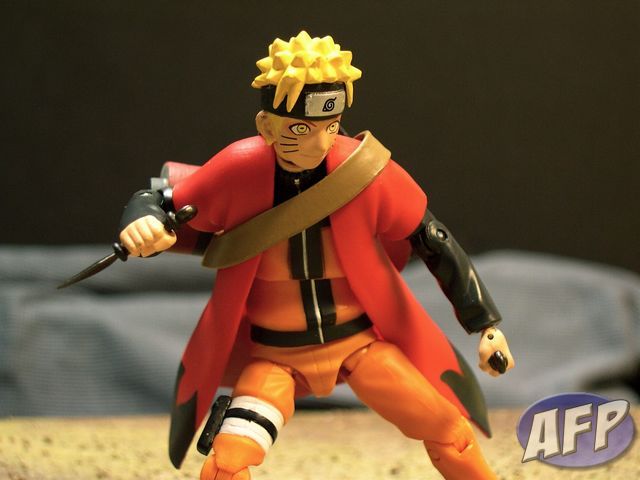 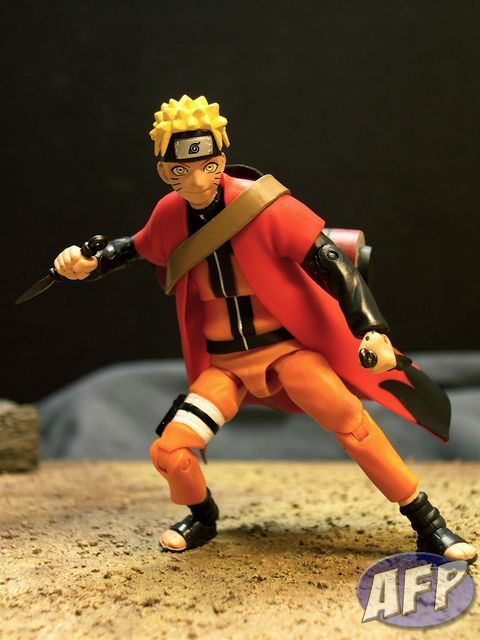 As far as paint application is concerned, I really have no major complaints. His orange parts are casted in colored plastic with the black details painted on while his arms are casted in black. His hair and face are painted, with some crisp tampoed-on details, which I am glad they did. The tampos look better than if they tried to paint it by hand (which is how his preview pics looked like).

If I do have a nitpick it’s the black printed letters and numbers on his lower back. You can see this when you take off his coat. Usually figures have some serial code stamped on it together with a “Made in China” mark. Naruto has that on his lower back, but in addition to it, he has a couple of black printed numbers and letters which look like an eyesore without his coat on.

When you take his coat off, you get a preview of what to expect when you get the regular Naruto Shippuden figure. I have to say I had a lot more fun with him when I took his coat off. You can really play with his articulation more once it’s off. 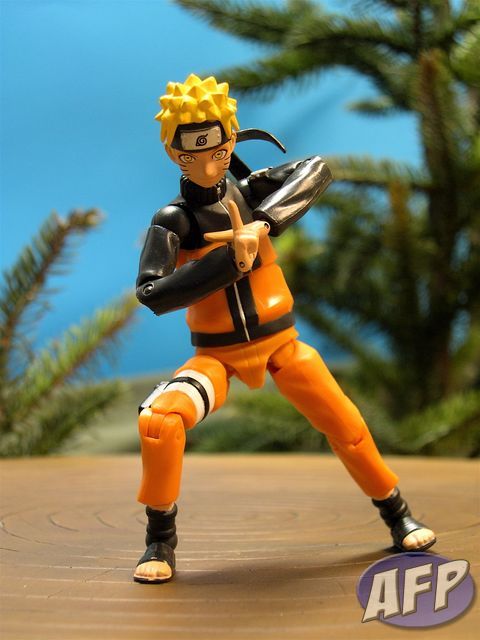 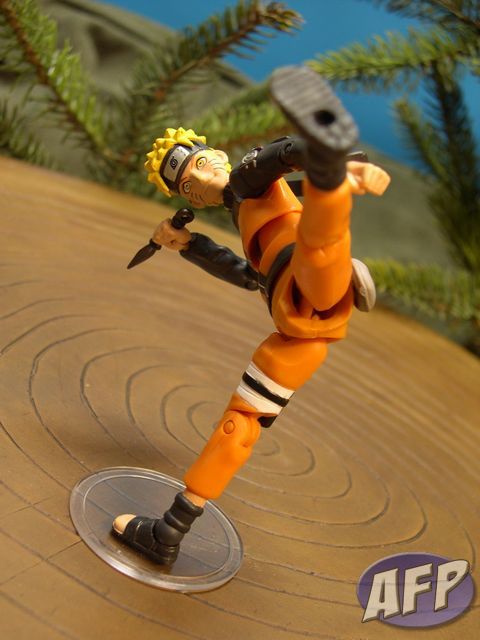 The clear stand is a great help with those running and kicking poses. A stand similar to those Figma stands would’ve been sweet too! 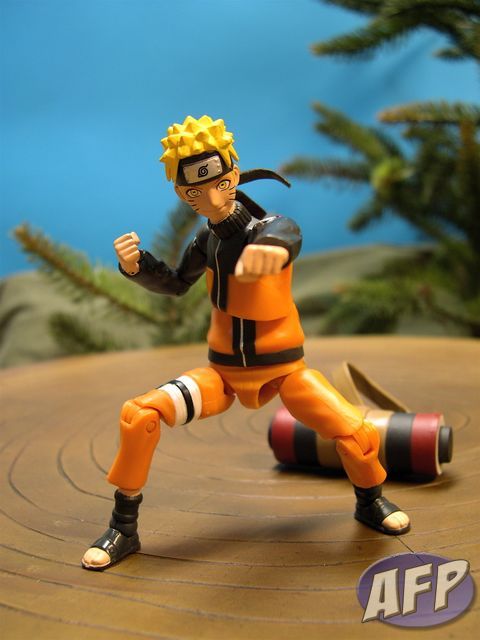 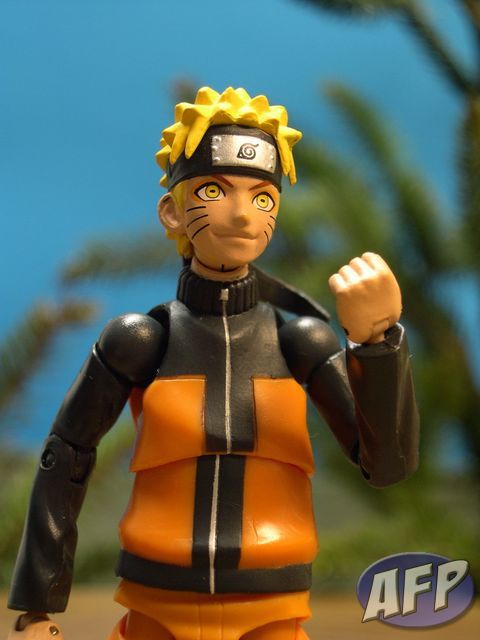 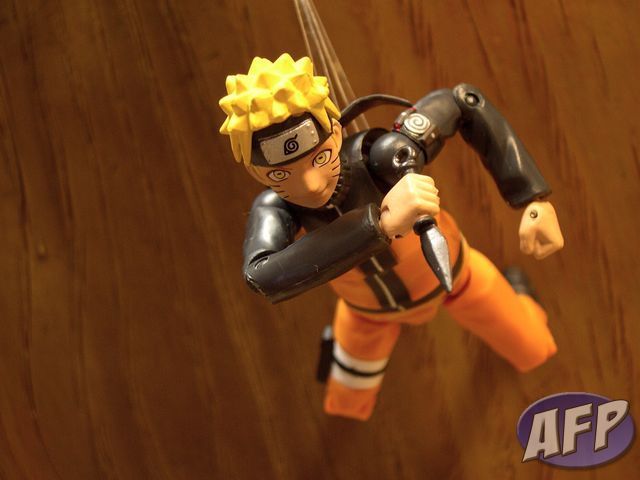 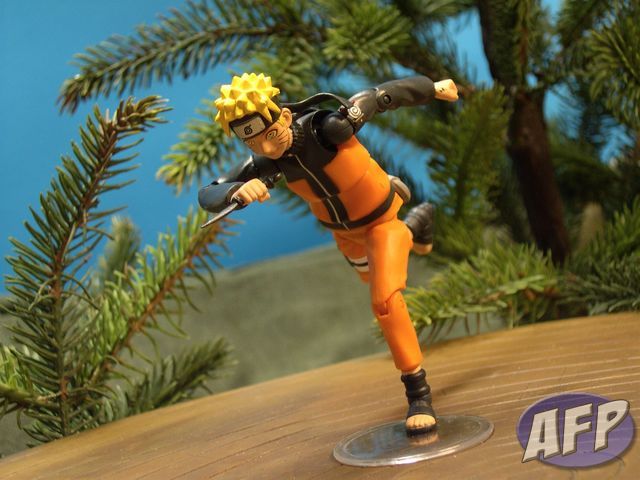 I regret not picking up at least two more of him to act as Shadow Clones. He was selling for $15 at the Con, which is a good deal compared to the high prices (around $70 up) he’s commanding at Ebay right now.

Also, I hope in future releases they find a way to include Rasengan and Wind-Style Rasen-Shuriken accessories with some corresponding hands to go with them. They’re pretty much his trademark moves. 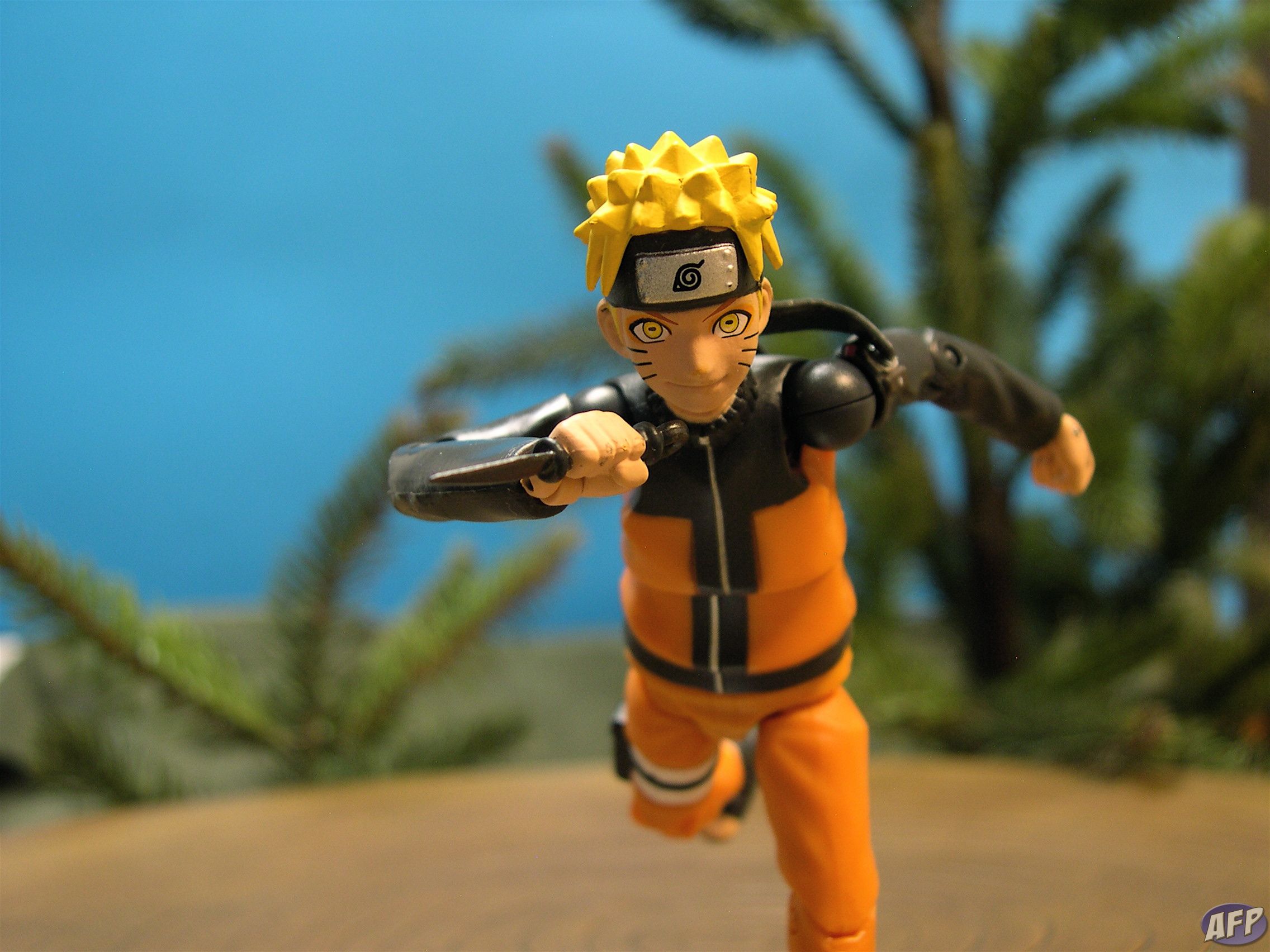 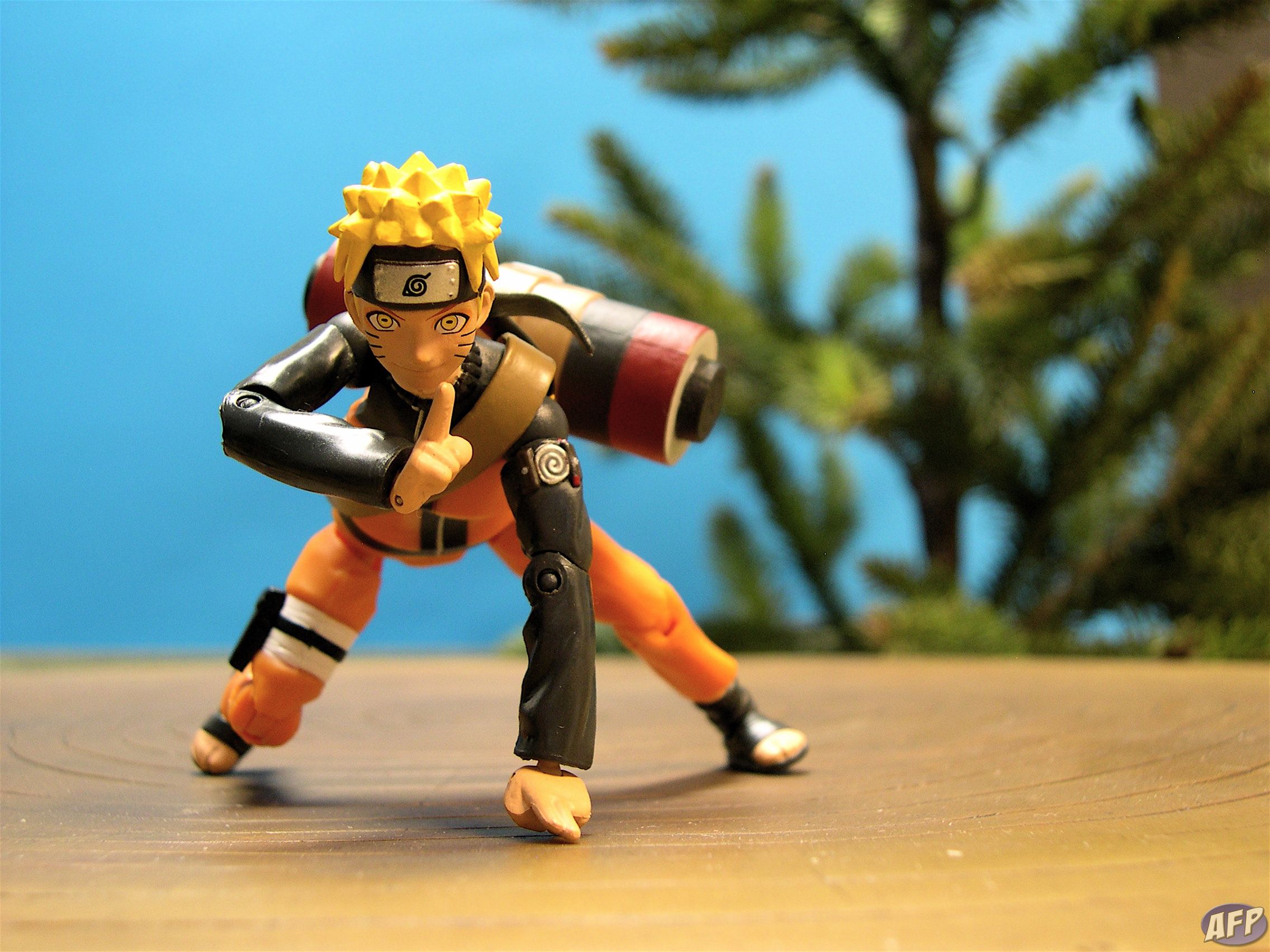 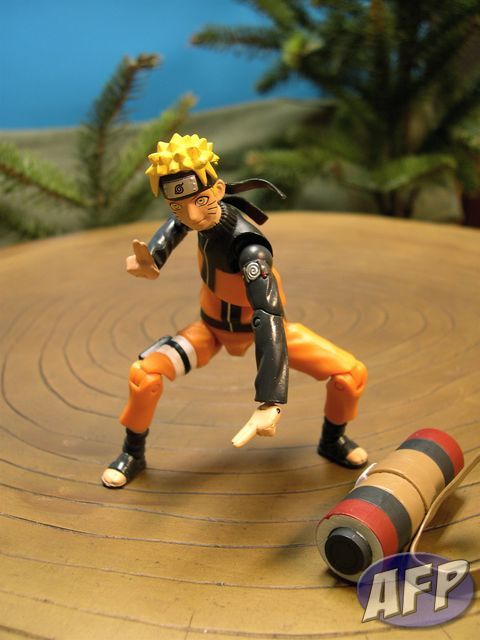 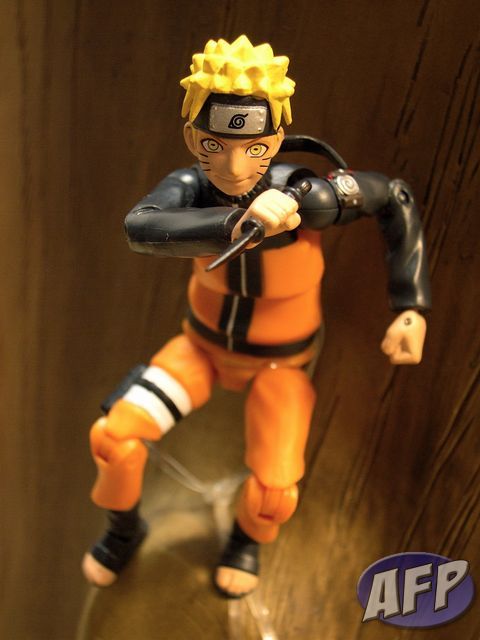 All in all, I am pretty pleased with this figure, and I can’t wait to get my hands on the first wave, which is supposed to hit this November. (Check out the SDCC Gallery pics for the upcoming figures!) I think they captured Naruto’s look and attitude really well, and I love the fact that he is highly articulated. Seriously, these guys are ninjas and you should be able to pose them doing their ninja moves! I am hoping that when the regular waves come out, the line gets enough support to get a lot of the other characters made. I would love to see the other kids like Rock Lee, Shikamaru and Shino and their respective teams get made. A Hokage set would be great too! It would be a dream to have some of the large characters like Gamabunta or even the Nine-Tailed Fox!

Picking up this SDCC exclusive is hard as he fetches higher prices online, but you can pick up a regular Naruto when the first wave comes out in a couple of months.

I do wonder how many of our readers are anime/manga fans, so if you like this kind of stuff let us know and comment away!

That’s it for now, thanks for looking and I hope you all enjoyed the pics!