I was delighted to get MatthewK to sign up for a guest review of the upcoming DC Universe Classics Zatanna. I figure he owes me – his review of the WWRp Bramble is one of the main reasons I’ve had to double my toy budget this year. 🙂

Thanks to the generous folks at Mattel and AFP, I have a (slightly) early sample of Zatanna from DC Universe Classics wave 14 to review.

This Walmart exclusive wave has just started hitting, but if you haven’t seen them yet, here’s some more thoughts and pics on Zatanna.

Zatanna is a character with deep roots in the DC Universe. She’s a Silver Age character, the daughter of Golden Age hero Zatara, been in the JLA, mind-wiped Batman and now has her own ongoing comic by Paul Dini (which is a decent read, btw).

Zatanna is particularly distinguished among DCUC figures for me as I actually really like the packaging. I normally could not care less about how these figures are packaged – I just want to rip them out and play. The packaging is an impediment to enjoyment for me, not something to enjoy. This one just strikes me as really cool for some reason. It’s probably one of the more interesting poses – she’s doing magic! C’mon! – and it doesn’t warp her limbs either. I also really like that the insert has a bunch of little rabbit outlines in there too.

Zatanna is appropriately curvaceous and has one of the prettiest female faces in DCUC for my dollar. My figure has some lines on her face from plastic swirl, but it’s not noticeable in person as it is in some of the pics here. I like that her arms seem a bit longer than most DCUC females. No T-Rex arms here.

The hat is removeable and I think she looks great with it on or off, a rarity in the action figure removeable hat game. The hat just rests loosely on her head, so jostling or posing will knock it off. I’m probably going to throw some blu-tack in there to keep it more secure (wish I had thought of that while I was taking pics). Her bow tie and collar are a separate piece, but integrate well with the rest of the sculpt. 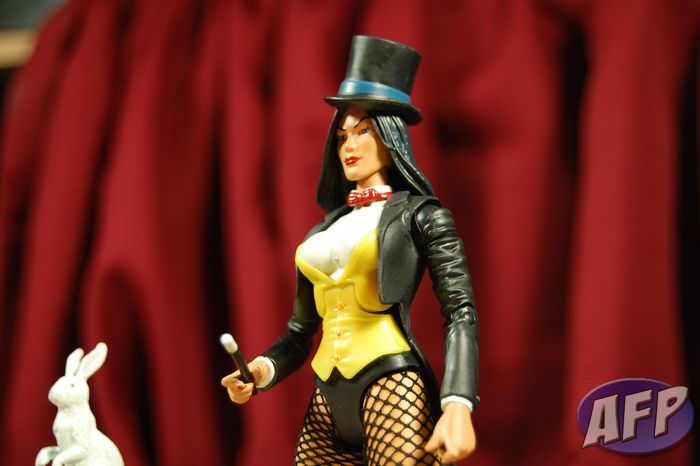 Both her hands are sculpted to hold weapons and she holds her hat brim and wand securely. The wand looks so good I found myself posing her with it in action scenes even though it’s not really comic accurate. The wand doesn’t make her magic, her backwards words make the magic happen. It seems a little nitpicky, but I think spell casting hands similar to Raven’s from DCUC 15 would have been more appropriate. Still, I really enjoy all the hat / wand holding poses, so I can’t complain too much.

As long as we’re talking nitpicky stuff, I might as well bring up this one nitpick of mine. I don’t love the sculpt of the shoulders and bicep section of her sleeves. Why are they so wrinkly? I’ve noticed this effect on other jacketed DCUC figures. I think the cloth wrinkles are a little over done here. Not a deal breaker –  just something I’ve noticed.

Z takes a bit of a hit in the articulation department. She has most of the standard DCUC articulation points, but I think most who follow this line know that her outward hip hinge is not functional due to the stockings. The stockings aren’t as good on this figure as they are on Black Canary. They are loose on one of my Z’s legs so it gives her a bit of a thick ankle look.

The waist swivel is also obstructed by the waistcoat and the head articulation is practically nil due to the stiff plastic of the long hair. However, the joints are all nice and tight and the plastic quality seems to be good. 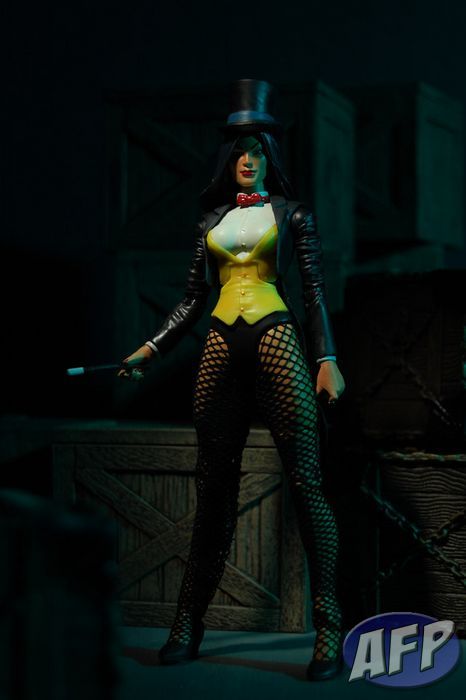 The paint looks about perfect to me – nice and sharp without mess. The skin has a nice warm flesh tone with some subtle shading. The waistcoat also has a bit of darker yellow shading that helps de-plasticize the look a bit.

Overall, Zatanna is a nice addition to the JLA shelf, if not a dynamic poser.