This is a guest review by Fwoosher MatthewK. This review was first published on the Fwoosh E-Zine.

The World War Robot Portable (WWRP) is a series of vinyl action figures based on the artwork of Ashley Wood. The original WWR figures were 1/6th scale figures (12inch), but this new WWRP line has robots shrunk down to the 1/12 scale familiar to fans of Marvel Legends and DC Universe Classics. I just picked up my first Bramble Frosty (The model name of the robot is Bramble and mine is painted in the ‘winter’ colorway with the nickname ‘Frosty’) from sponsor Big Bad Toy Store.

I normally don’t care about or notice packaging on my figures, but this struck me as a particularly nice and striking box design.

The front flap is held closed with a magnet and when opened reveals the bot and a really cool piece of Wood artwork. Another nice thing I noticed is that they didn’t tape up the box, so if you feel like keeping this packaging, it should be pretty simple to get the figure in and out of it.

The individual figures come with the robot, a big as heck gattling gun, a backpack, a chain of bullets and four cloth packs with perfectly tiny little straps and clips on them. The clips and straps actually work which I found to be particularly impressive and this scale. The weathering on the cloth is also really impressive. The material looks really crudded up and matches up great with the weathered paintjob on the robot. 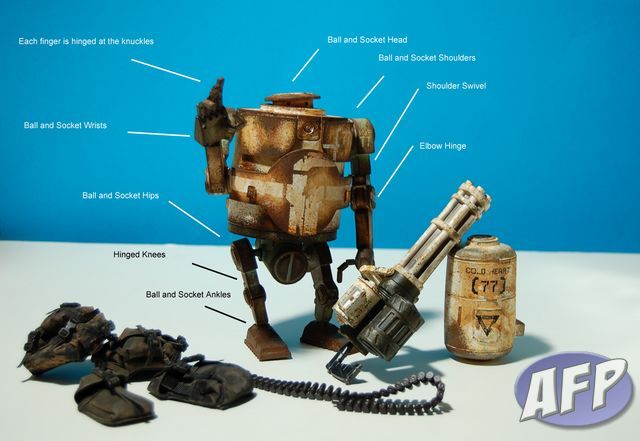 I forgot to indicate on the above picture that the gun has swivel articulation at the handle so you can get more poses with it. The ball and socket joints have a limited range at the ankles and wrists, but it’s more than enough range to get Frosty into a lot of cool and natural looking poses. It was a little scary cracking all the joints, though. They were pretty stiff right out of the package, but all was well once I got them moving.

The fully articulated fingers are fun. It was impossible for me to resist putting some silly hand gestures on Frosty.

Insane. The rust and grime detail on this little bugger is so beautifully detailed and realistic. It blows any paint job I’ve seen in this scale out of the water.

I got my Winter Bramble for 50 dollars plus shipping from BBTS. It’s a little pricey if you think of it as regular 6 inch scale action figure, but this feels more like one of those high end kinda figures like a low production run hot-toys or sideshow import 12 inch figure. Thinking of it in that terms, the cost makes sense – about half the size of those figures = about half the cost. The good news is I feel satisfied with what I got for my money here.

Bad news is, I waited a little to long to get into the game and the variants of the Bramble figures are now kinda hard to come by (most etailers are pre-sold out) with ebay prices through the roof.

Good news is, there is a new style of WWRP robot on the way – The Bertie – and variations of that robot are available for pre-order at fwoosh sponsors BBTS and Cornerstore Comics. Based on the coolness of the Bramble, I have no problem putting in the pre-order on a couple different Bertie variations. 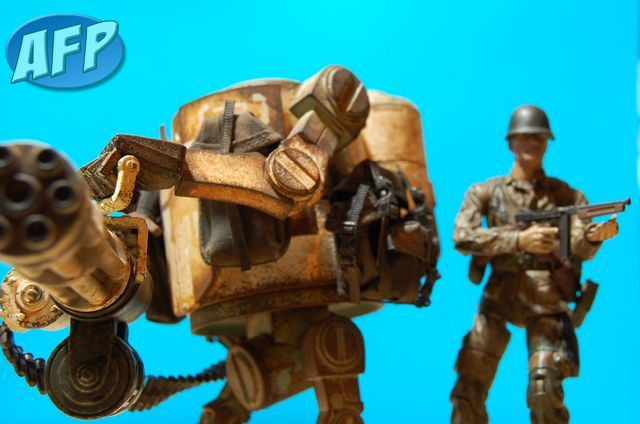