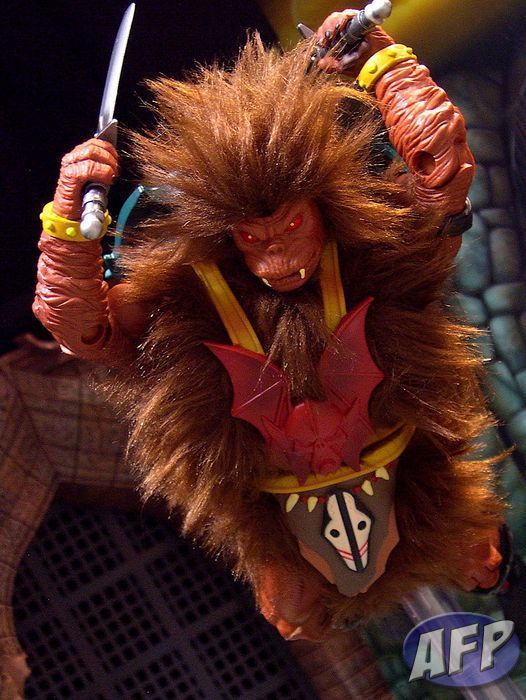 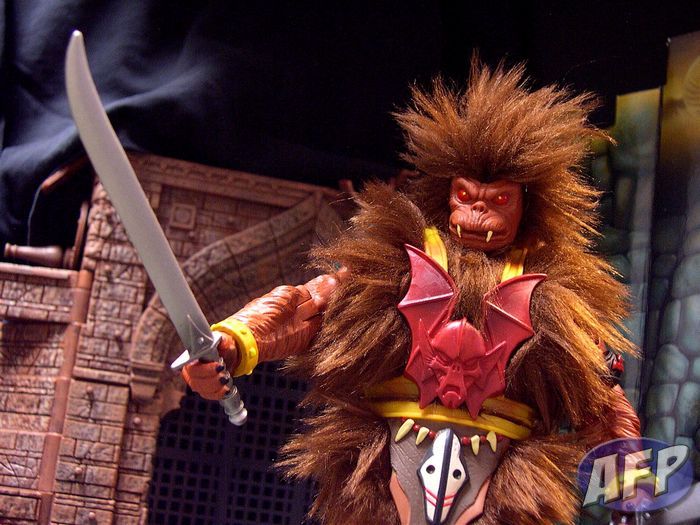 A member of the Evil Horde gang, Grizzlor is Hordak’s wild and hairy Prison Guard. If you’ve ever watched the old She-Ra Filmation cartoon, you’ve seen him, although he doesn’t exactly look like this in the ‘toon – the cartoon Grizzlor’s fur is not as mangy as this! Of course, his look is closer to that of his original toy’s appearance, especially the inclusion of the actual fur covering his body.

Ah, just look at all that fur. From what I recall, the vintage toy looked like a ball of fur with a face and limbs. Grizzlor’s MOTUC update still kinda looks like that but way more cooler and ferocious looking. He looks like a wild man with out of control hair growth! And I think that’s why I like this figure! 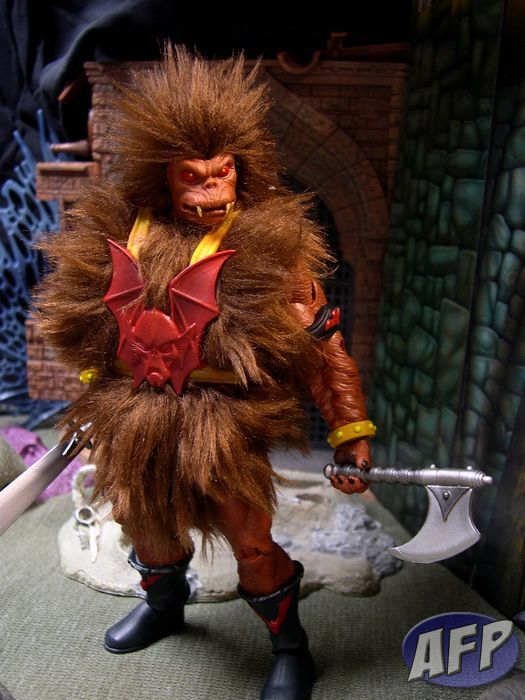 Grizzlor here is made from the Beastman body, a new hairy headsculpt, new hands and boots, and of course, the furry covering. His fur is actually a furry cloth covering his torso, underneath is the regular Beastman body. I took a peek, everything’s there, the furry shorts, Masters belt, etc. Mattel also included a loincloth sculpt that his 200x Cartoon Appearance wore, although they didn’t include the alternate face sculpt we saw in his early prototype, I’m not complaining ’cause I actually prefer him wearing that loincloth. It just breaks up that “ball of fur” shape that he has a little bit better. It would’ve been nice to have that alternate face for 200x fans though. ( I tried taking off his face, but it wouldn’t come off on mine.)

Although his fur looks wild and uncontrollable, I was surprised at how much you can actually shape it. I managed to tuck in some hair under his costume straps to give him a little bit more body shape, and the hair on his head is long enough that you can actually comb it around (break out that She-Ra axe-comb). More of that near the end of the review – Force Captain Adora’ll show you. 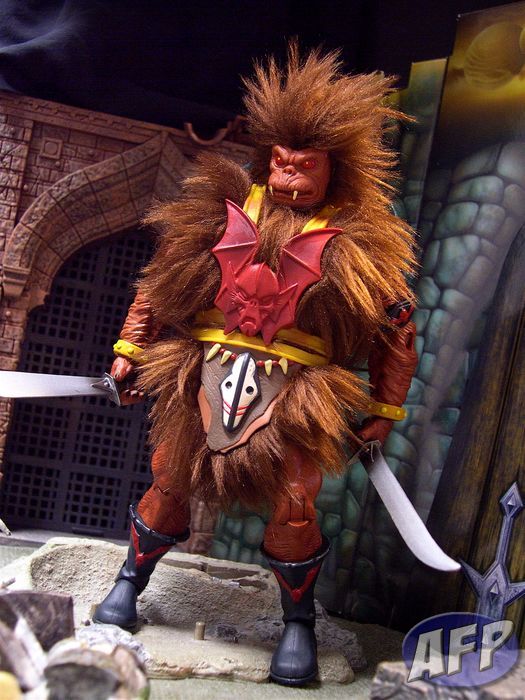 My own opinion of the fur? I like it. I normally wouldn’t like real fur on any figure, but I do like the execution on this figure. The fur is his gimmick after all. If I would change anything though, I wish they had given his fur body a little bit more shape. Looking at the figure, if you really wanted to you can actually trim some of the hair on his torso sides to give him more of a v-shape. Heck, you can trim everywhere if you wanted to. Be forewarned though, the hair WON’T grow back!

Read his bio – he was actually a nice teddy bear before, when he was a young 428-year old furboy. Also, somebody had a lot of fun making up his real name. His plastic package also has that ” Evil Horde ” sticker that Hordak has. 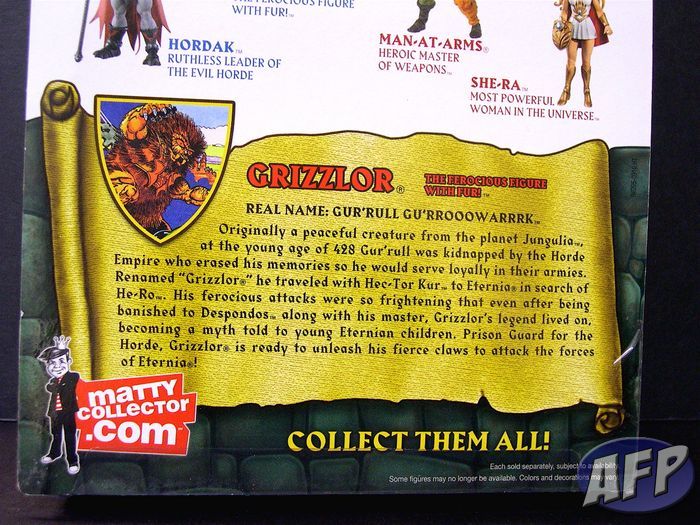 The headsculpt on old furface is actually nice. He can look cute and scary at the same time. The detail on his costume is very well done.

The paints on his Horde getup are all crisp, if there’s anything I could nitpick though it’s the paint on his fangs, they painted the top but not the sides, but it’s no biggie for me. You can see he has a four-fingered hand, and they also painted “paw pads” on them. Awww.

I do have to mention that the figure I got had reversed feet and shins, before the review I had to “heat and pop” them to make the switch. I just couldn’t take pics without fixing them! More on that at the end of the review! We’ll find out when everyone gets theirs if this is a widespread issue. So far, I haven’t heard other early reviewers having the same problem. 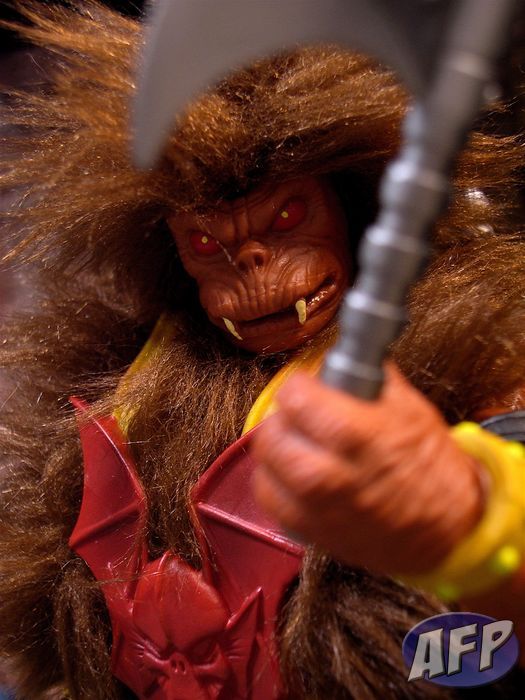 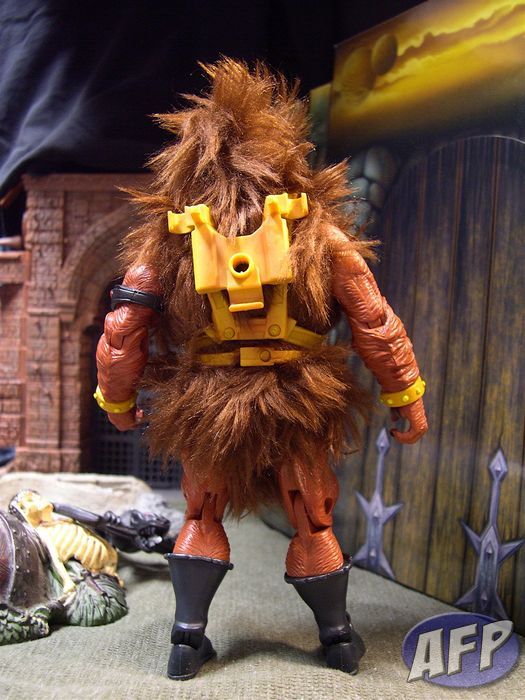 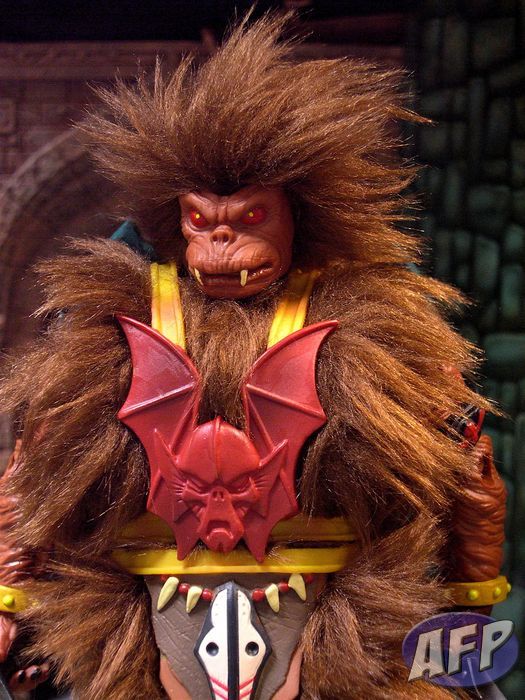 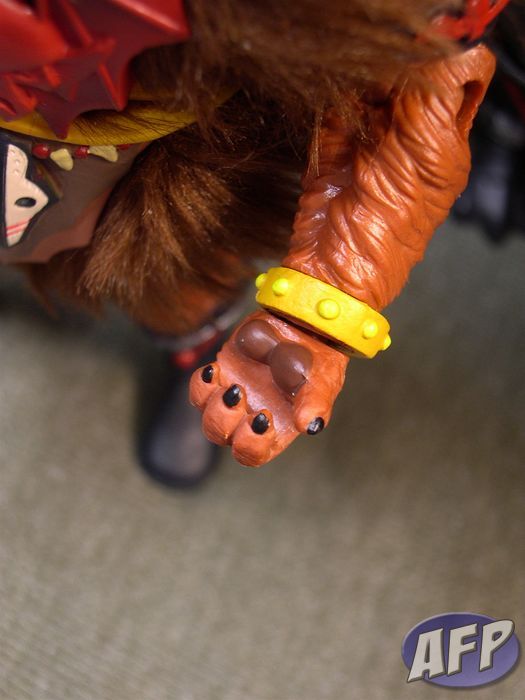 The Beastman body is actually one of the shorter figures in the line, but thanks to his hair, Grizzlor doesn’t look so short! 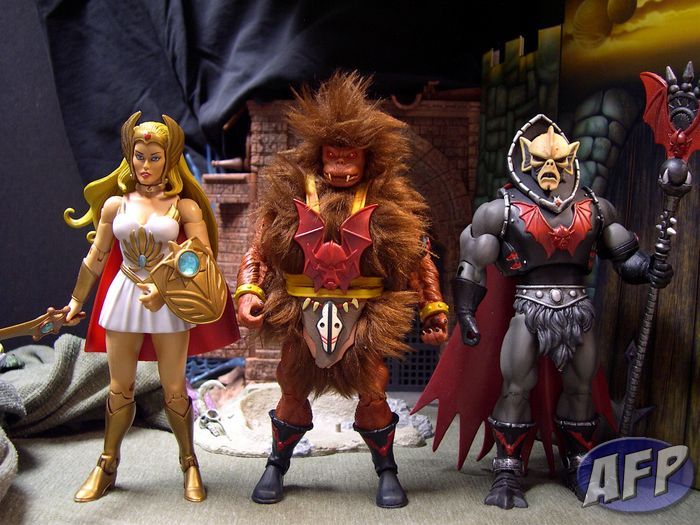 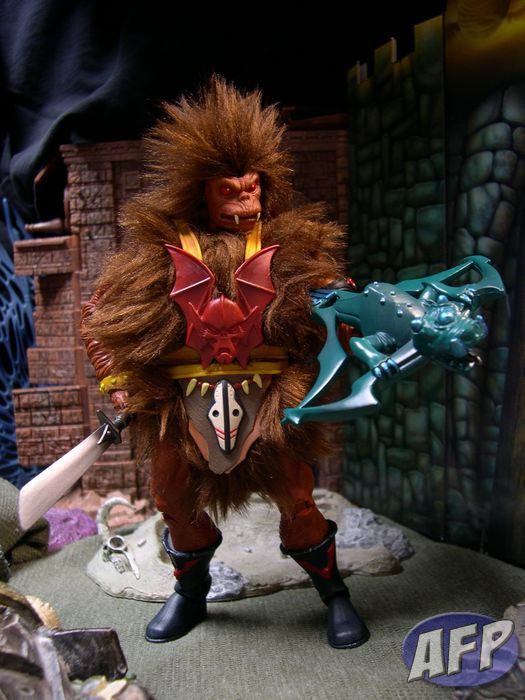 One of the things I love about Grizzlor is his wealth of weapons! He’s got a machete, a sword, an axe and a crossbow that’s similar to Hordak’s, but with a different head and tail sculpt. And the best thing is he can carry them all on his back! That certainly is a big win for me, it’s always such a treat when you don’t have to worry about storing extra accessories somewhere. Grizz here keeps them all on him! And they all fit snug on his back! 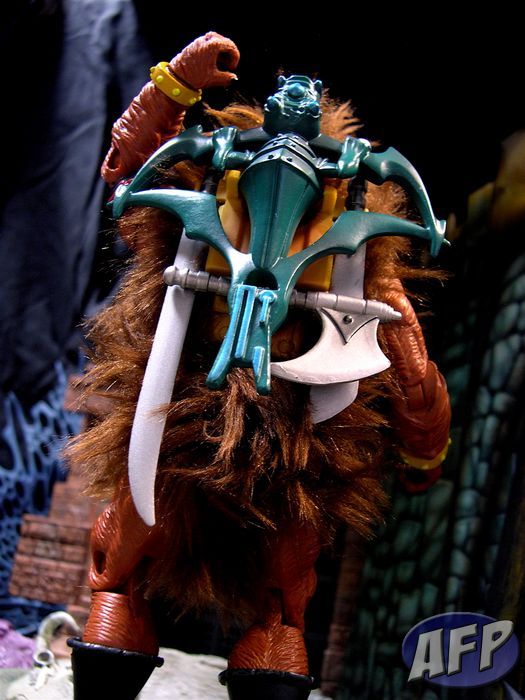 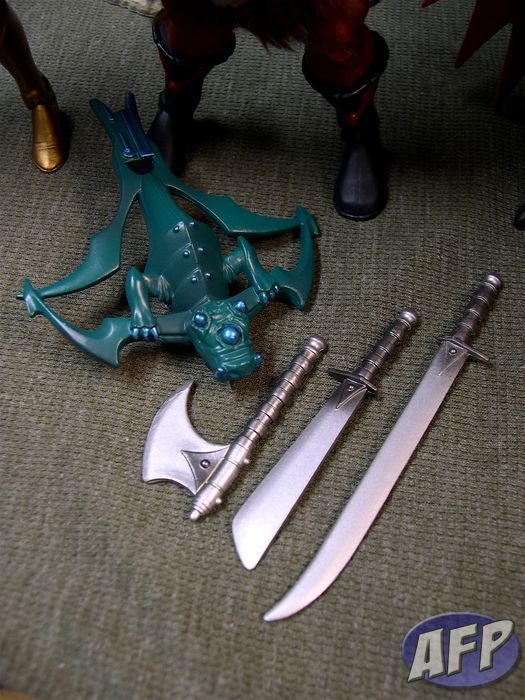 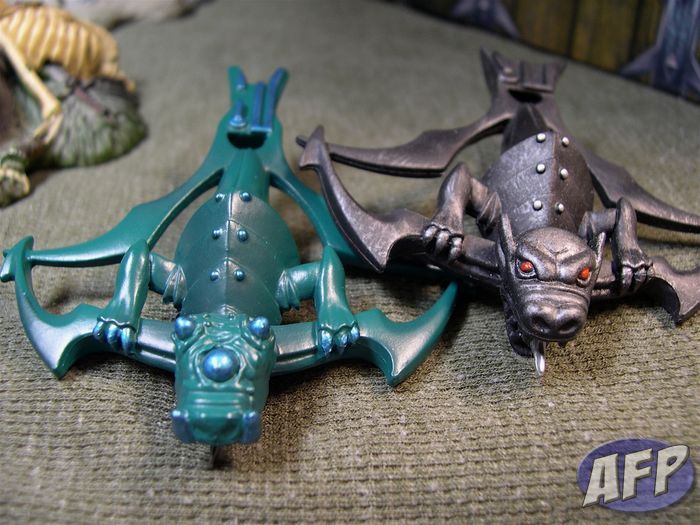 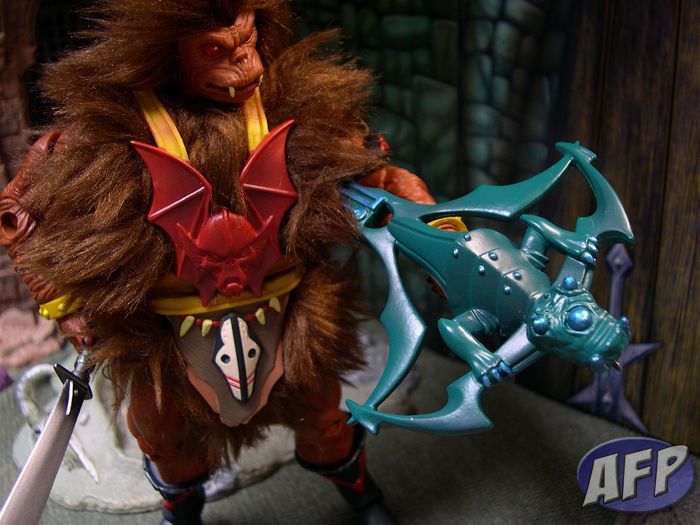 You can have some fun with his hair, you can have it standing up Akuma style,  you can Wolverine it up, or you can just make him look like he just walked out of a hurricane. She-Ra’s axe-comb really comes in handy for this. More on this when Adora gets her hands on him. 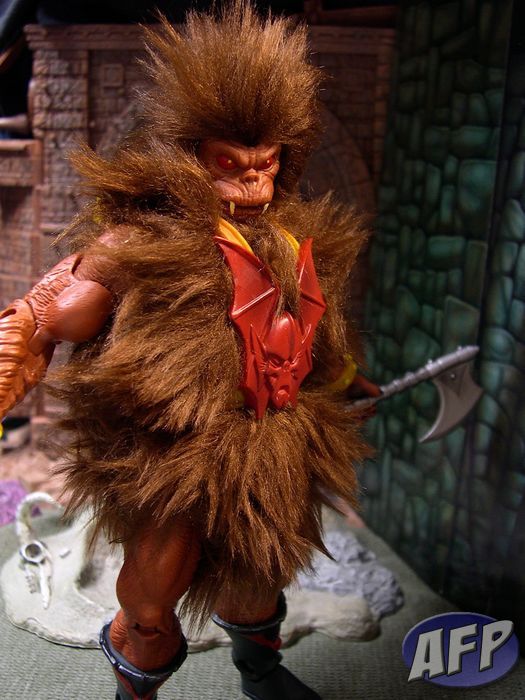 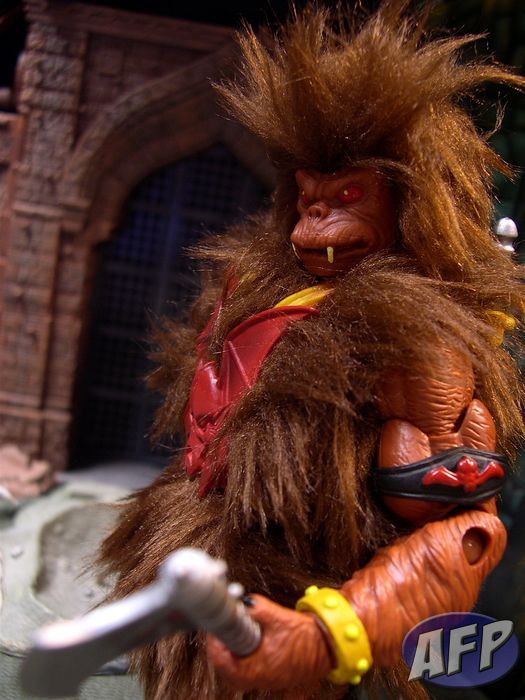 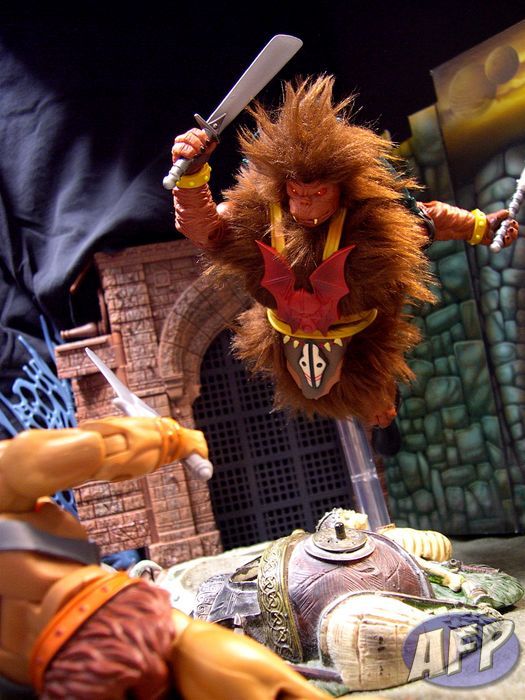 Articulation-wise, that fur covering does limit his ab and waist articulation. They’re all still there underneath, but because of the covering, they don’t move as well. His ab crunch in particular feels like it’s been glued together on the figure I got. I feel like the cloth is soft enough for it to move but it doesn’t. The waist swivel moves a little bit though. His head moves fine, and his legs and arms still do the job, so you can still get some nice stances and poses out of him. And I have to say, even with all that fur, he can actually strike some imposing poses! 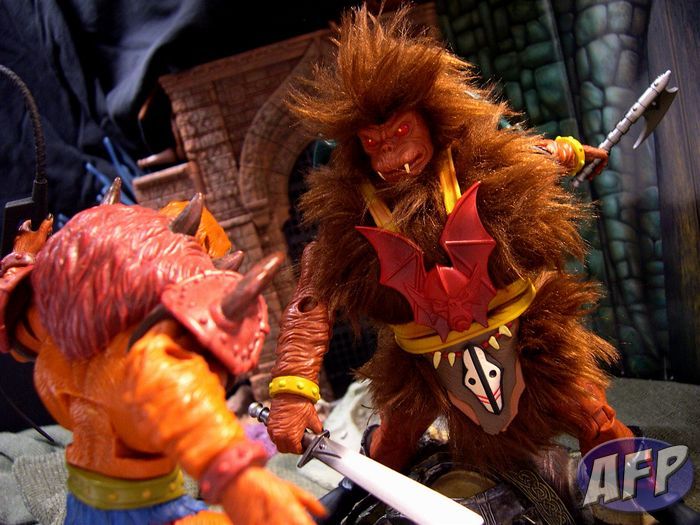 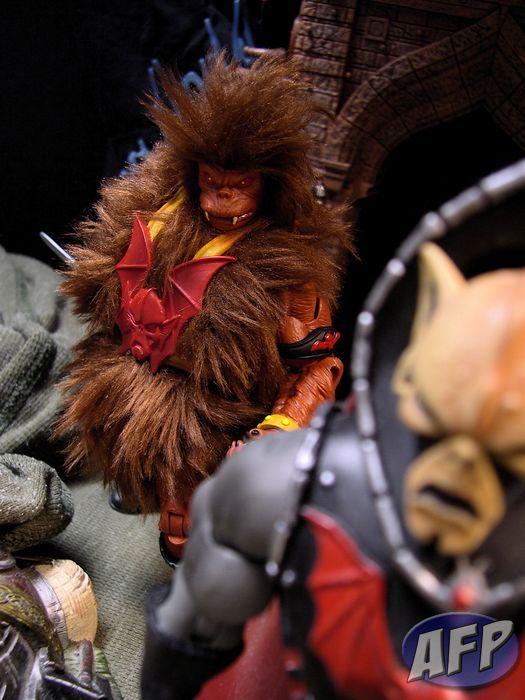 All in all, Grizzlor is a really great addition to the MOTUC line. When I first saw his prototype, I wasn’t too thrilled to find out that he had actual fur covering his body. Usually fur looks silly on an action figure. But having him on-hand, I’ve certainly changed my mind. He’s actually a fun figure, and most of that fun actually has to do with his fur! I might’ve felt silly combing his hair with an axe-comb, (my wife certainly thought so), but it was kinda fun messing with his hair! You can tell with all the pics I took.

Grizzlor will be available at Mattycollector.com on November 15th, 12 noon (eastern time)/9 am (pacific), together with the slightly different King Grayskull and the Great Wars Assortment Weapons Pak. Of course, if you have a subscription, you don’t have to worry about falling online. I have a feeling he’ll be one of those quick sellouts though. Whenever a figure has an interesting gimmick, I feel like fans want them more. With the recent figures lasting a couple of hours I might be wrong though. Hopefully everone who wants one will be able to get him!

This figure was provided by Mattel and we would like to thank them for sending us one to review! More pics of Grizz below and a little “heat and pop” action! 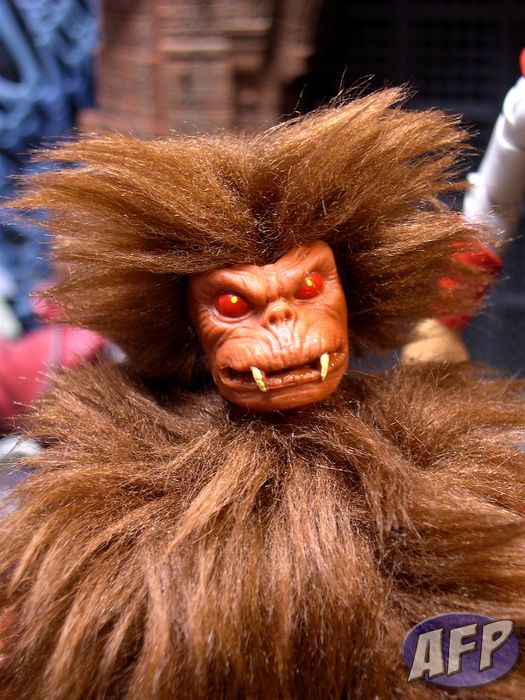 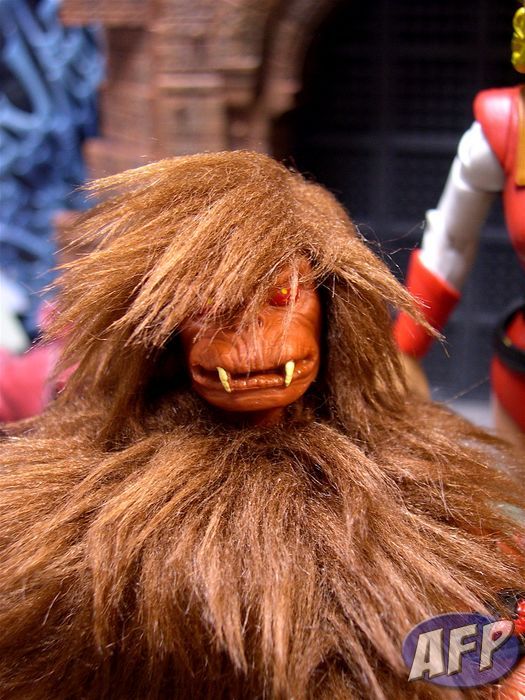 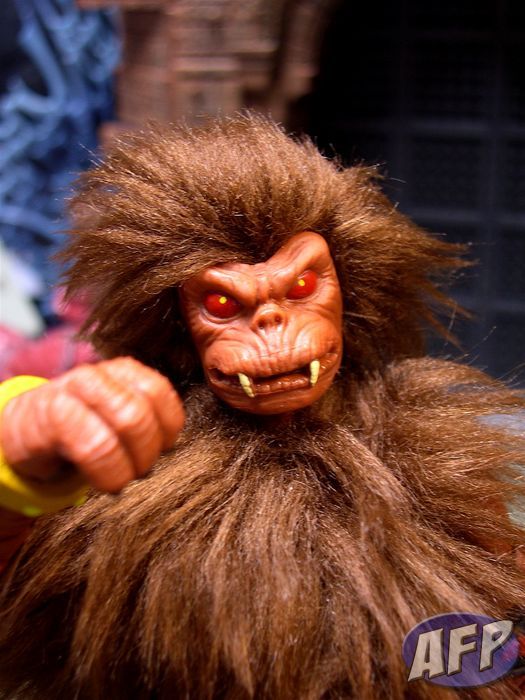 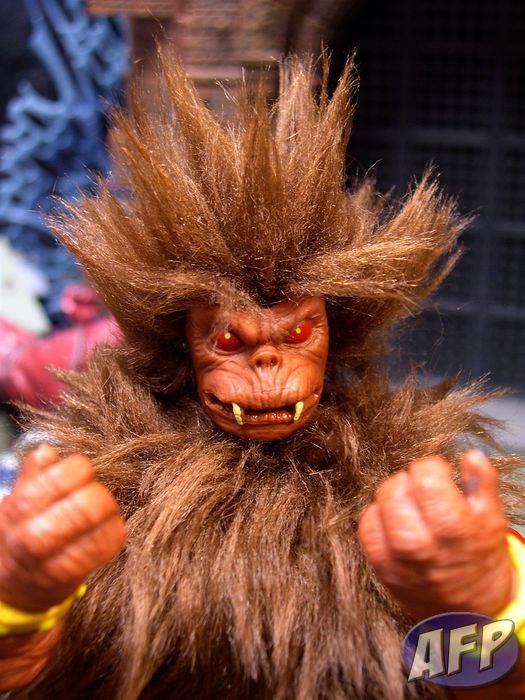 As I mentioned, the figure I got had the feet reversed, as you can see in the pic below, at first I wasn’t sure if it was just his feet or both of his shins also. After staring and comparing them with other figs in the line, I just decided to swap both shins. (Heated with a heat gun then just popped them out of there.) Hopefully this won’t be a widespread issue like what happened with Mr. Roboto. 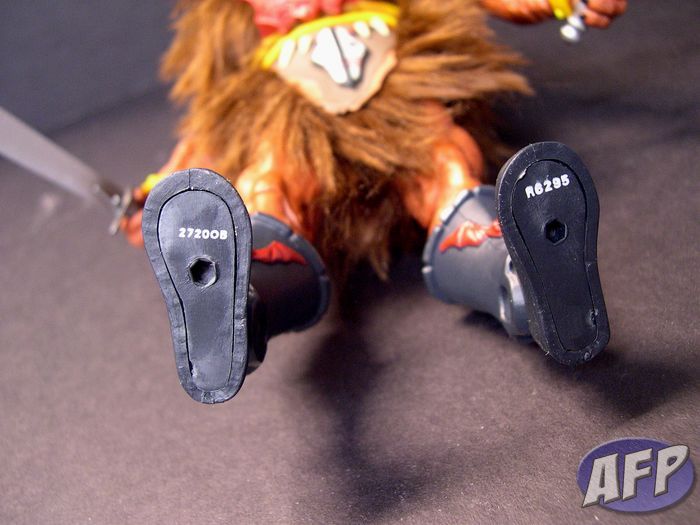 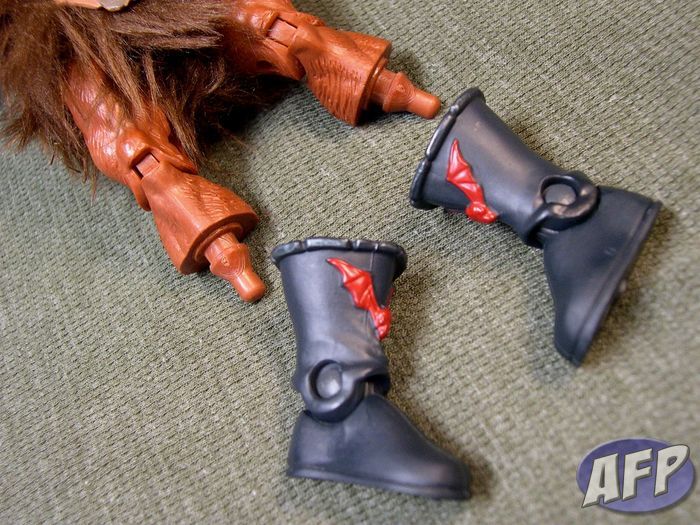 Well that’s it for now! I hope you enjoyed the early pic review, and as always, comments are verrrry welcome, I like hearing from readers! Thanks for looking!

15 thoughts on “Masters of the Universe Classics Grizzlor”