Wow, when it hits, it hits hard! Last Friday (Oct. 5th), Ron emailed that he was sending me a DCUC 14 Hourman that Mattel had sent to AFP for review and I was rendered giddy with excitement. The package must’ve caught a strong, east blowing wind because it arrived Monday (the 8th) and I went to ecstatic! This morning (Tuesday, the 9th) I got an email from fellow NE FL Fwoosher, Agent Orange in Jacksonville, about actually finding a case of DC Universe Classics 14! Holy crap, my head exploded! Before the morning was over, several of my Jacksonville based Fwoosh Bros had acquired their DCUC 14 sets and secured a set for me as well! Hopefully I will have them in my possession by this weekend.

Overall, Hourman is a solid figure and a good representation of the Golden Age Justice Society member. This figure had no problems or issues other than his right leg was a bit bowed from the action stance in the package. That was easily fixed with a little time under the hair dryer and then some cold water.  The joints are tight, the plastic feels nice n’ sturdy and the paint apps are clean and sharp. 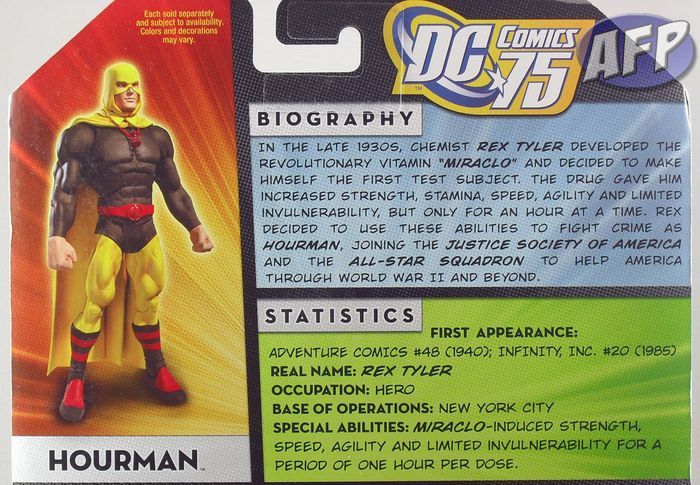 I was surprised that they chose to use the slimmer buck/body for Hourman. The prototype pics make him look pretty studly so I didn’t really catch it until getting the actual figure. Considering the nature of the character, I would’ve thought Rex was a shoe-in for the one of the larger bodies but in retrospect, the heroes of the Golden Age were never depicted as hyper-muscled studs like the superheroes of today and I’m sure the Horsemen were going for something closer to that “classic” look.

Unlike past hooded DCUC figures, Desaad, The Spectre and Raven, Hourman’s hooded head is all one piece. The cape and collar are actually two separate pieces though. I’m guessing the two part collar and cape was to make concealing the necklace easier. The range of motion for the head is limited to just turning but the head is also slightly skewed to the left, which makes me think that maybe there is some issue with it that’s limiting the ROM. Will have to pop the head off and check it out. Hopefully it’s just this particular figure that is like this and it’s not the norm for every Hourman figure. 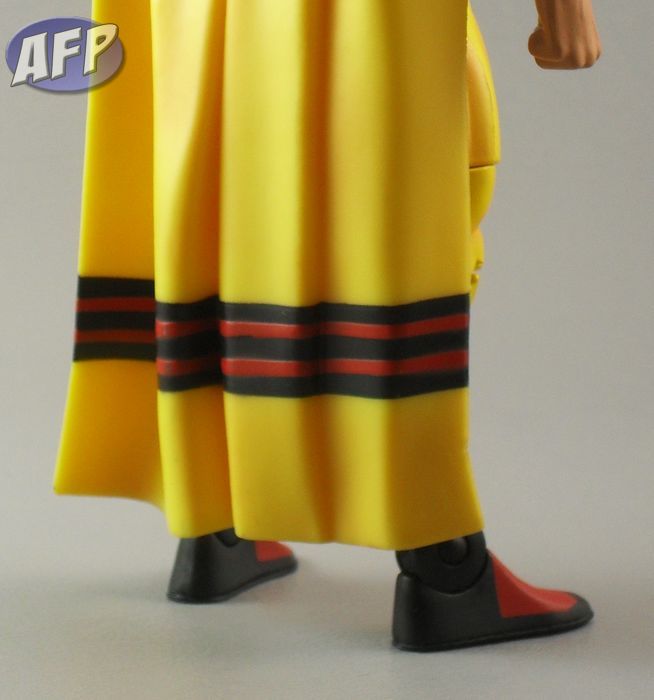 The stripes on his cape are actually part of the sculpt and not just paint! That’s a nice little detail. DC Univere Classics collectors will also be happy to find that Hourman’s cape, like the capes of his DCUC JSA comrades, is light, thin and fairly flexible.

The pack-ins that accompany Hourman are a 75th Anniversary Collector Button featuring the Justice Society along with the cranium and crotch pieces of the Wave 14 C&C figure, Ultra-Humanite. The sculpt of U-H’s head is just beautiful. Well, as beautiful as an evil, super genius ape can be. I cannot wait to put that big monkey together, he’s gonna be boss.

So there you have it, our First Look at the DCUC 14 Hourman! Thank you again to Mattel for sending us Hourman to preview and review! If all goes well, I’ll be putting up reviews of the other DCUC 14 figures very soon, so stay tuned.

Now saddle up, set loose the hounds and happy hunting!