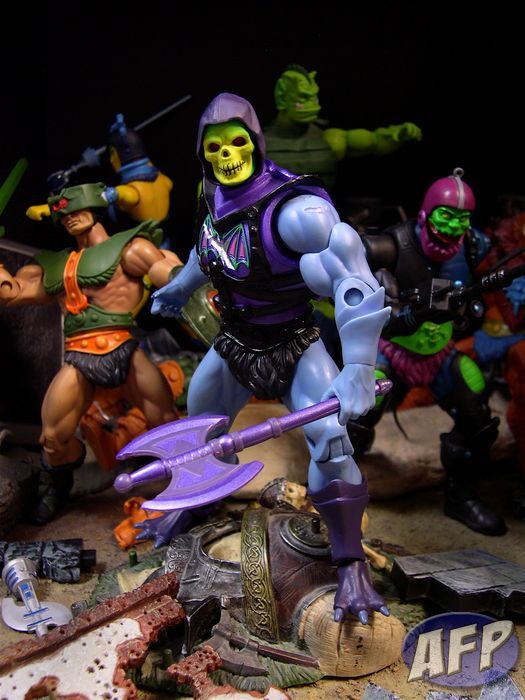 Back to back to back Masters of the Universe Classics Pic Reviews! Awesome! This time we get a look at Mattycollector’s March Quarterly Figure: Battle Armor Skeletor!

So what if we’ve got about three versions of Skelly by now (counting Keldor) – having the fourth be his “Battle Armor” outfit is still a welcome addition in my book! Get ready for lots of pics – I kinda went a little crazy with them. On to the review! 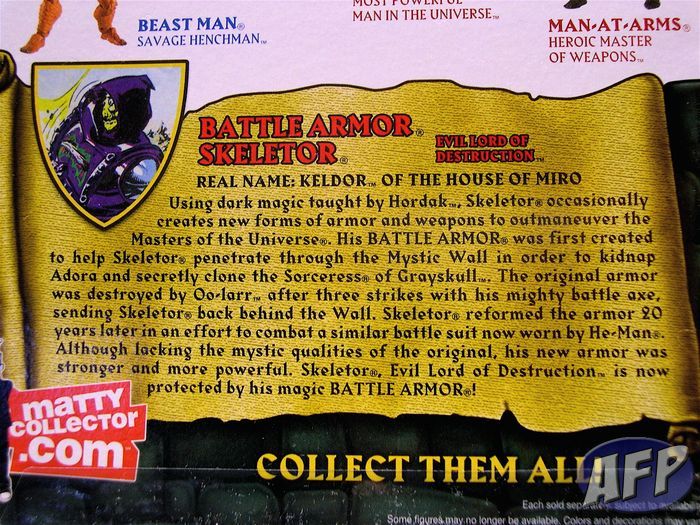 First off, I have to mention that the vintage Battle Armor Skeletor was one of my favorite toys as a kid. I could not stop hitting his chest so that bat emblem would change to different degrees of damage! So there is a bit of nostalgia for me seeing an updated version of that toy. So prepare for the occasional gushing. 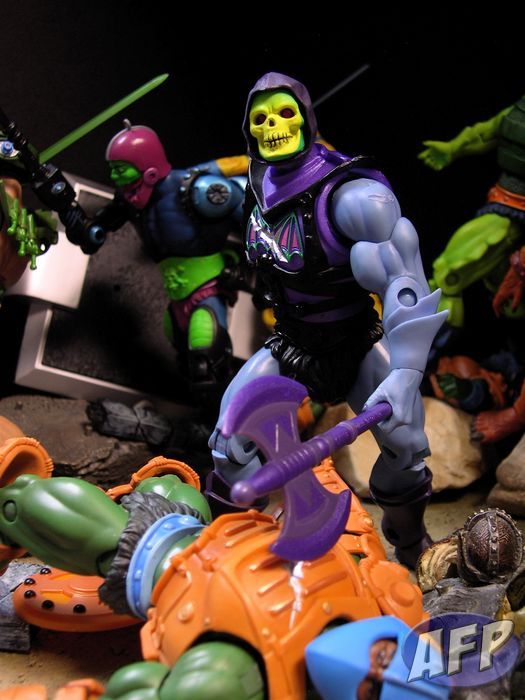 The MOTUC Battle Armor Skeletor’s armor design is very similar to the vintage design. Most of the details are the same, with the Four Horsemen streamlining the design to match the modern toy line. 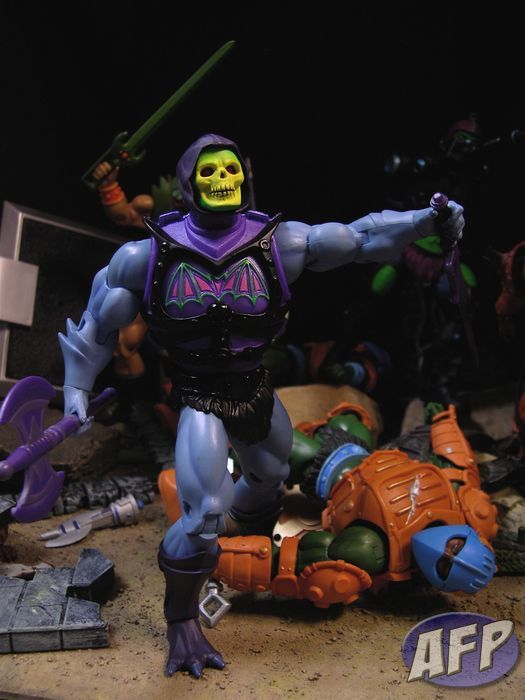 In the vintage figure, the bat emblem is painted on. This modern version has the bat emblem sculpted on the chest plates, which I think is great. Aside from Skelly’s face, the chest emblem draws most of the attention and the sculpted details make it more rewarding to look at.

The armor looks great. It looks thick and durable, and the Horsemen did a great job translating the old design into a newer version.

As much as I enjoyed the spinning chest action feature as a kid, I am glad that they didn’t include it in this newer version. Gone is the spinning barrel in Skelly’s chest, instead you get to take his armor apart and pop the chest plates on and off, just like last year’s Battle Armor He-Man. Keeping the action feature might’ve interfered with the figure’s torso articulation, so I don’t mind the decision to not include the feature.

There are three chest plates: one undamaged and two with different degrees of damage. My favorite is the one with the single hack that comes across the center. The armor’s pretty easy to take apart and the plates fit snugly inside.

BA Skeletor also comes with a purple axe, a repaint of He-man’s battle axe. I like the metallic purple finish they used on the axe. 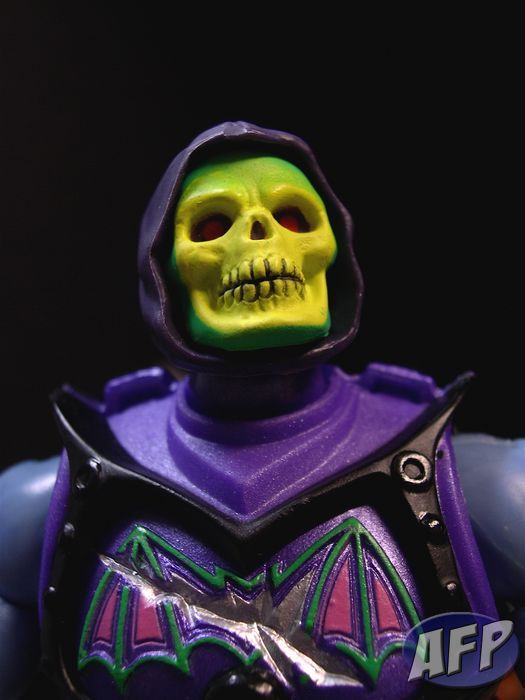 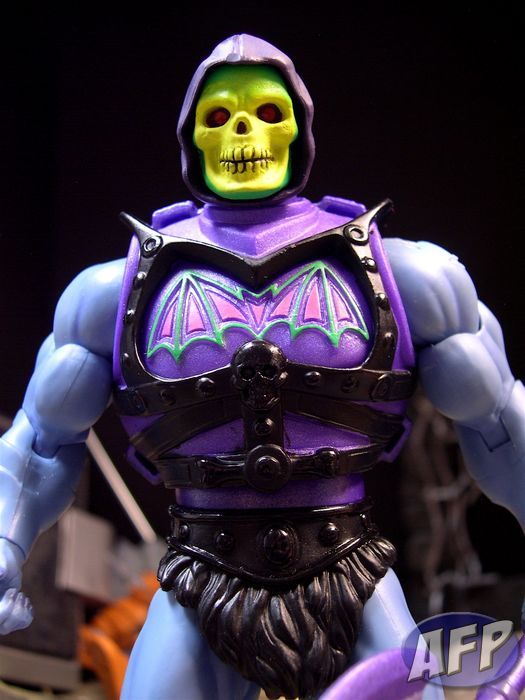 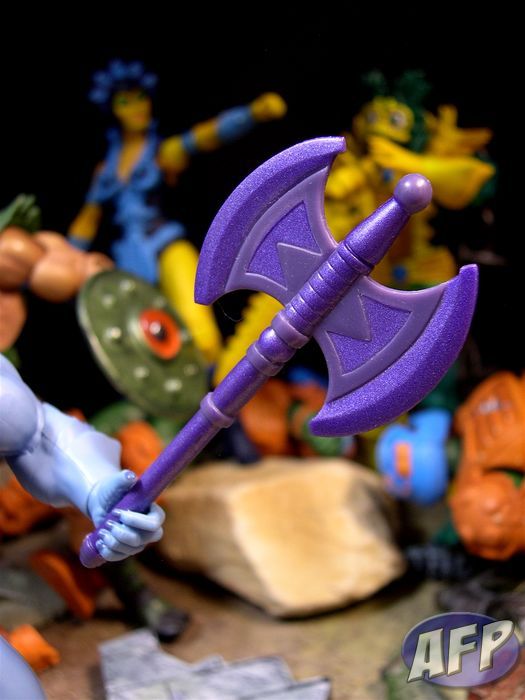 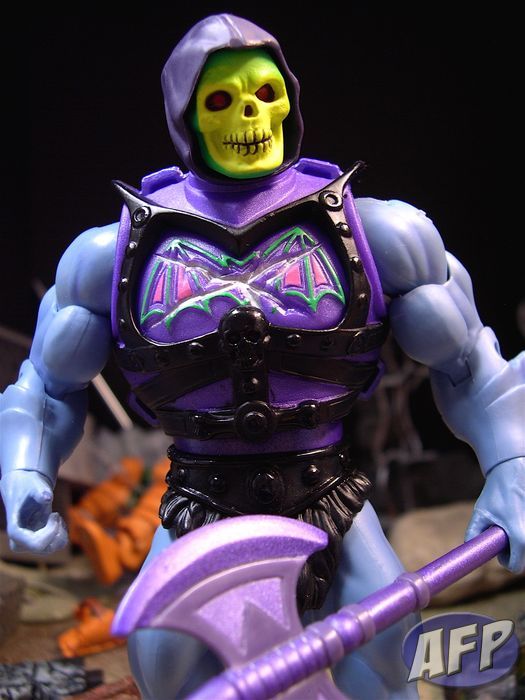 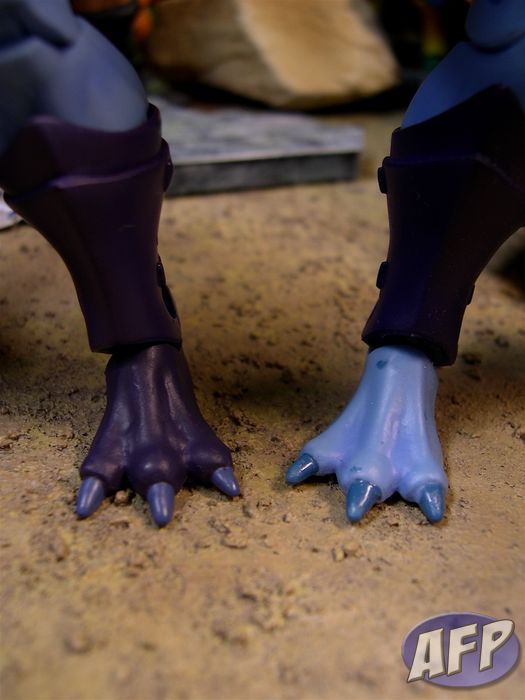 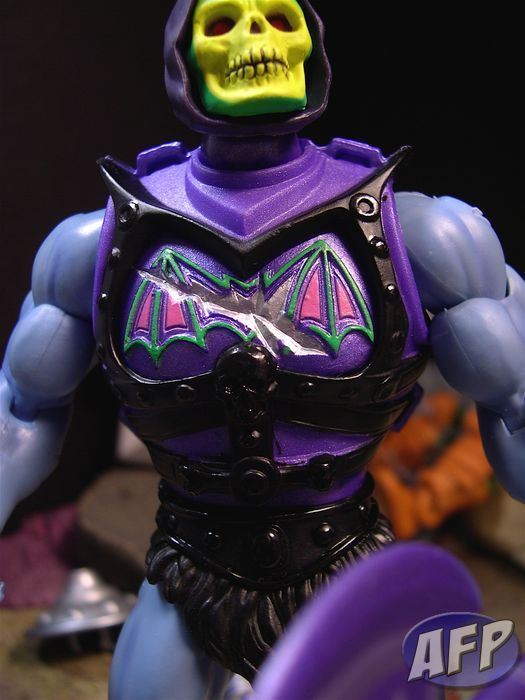 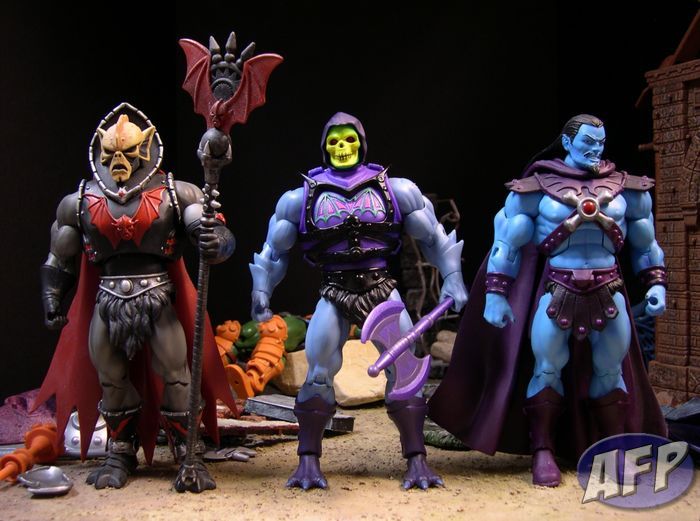 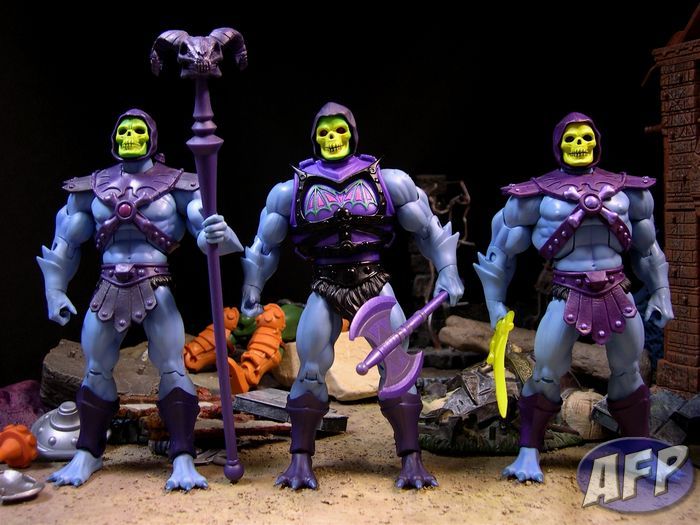 Aside from the battle armor, there are also other things that separate this Skeletor from the other versions of Skeletor.

For one, his face paint application is different from the first Skeletor released. The green and yellow parts are clearly separated with the yellow fading into green on his forehead. The previous Skeletor had more of a dry-brushed yellow paint app on top of the green. So far you’ve got different paint apps on all three skull-face Skeletors, which I like, as it differentiates every release moreso.

Also, BA Skelly’s blue skin is pretty much the same as the first version.

He’s wearing the more standard loincloth with belt in black, and his feet have been painted the color of his shin armor. 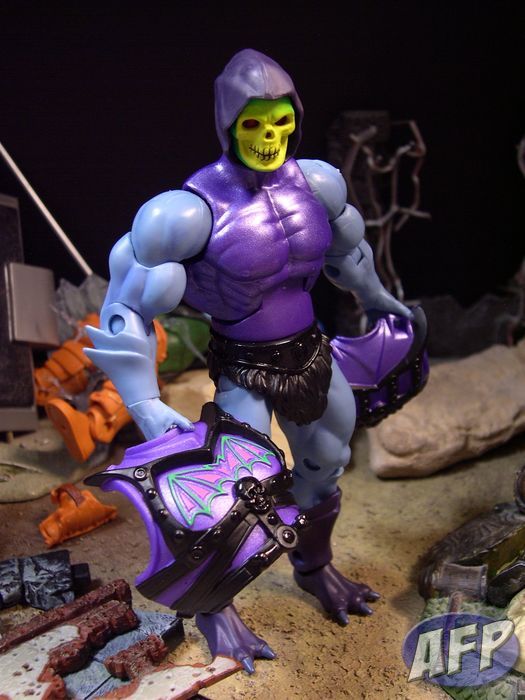 Now, we all know these figures are updated versions of the old vintage figures, and most of the designs are a reflection of that. But I wouldn’t mind if they had included some additional detachable armor parts to make him a little bit more “battle-armored”. If you think about it, Skeletor pretty much armored up his torso but left almost everything the same. Some optional leg and arm armor would have been great additions for those who want to really “armor up” their Skeletors. Even if it was just extra armor for his forearms, they just look too naked for the a “battle-armored” look. At the same time some traditional collectors can keep their BA Skeletors old school. 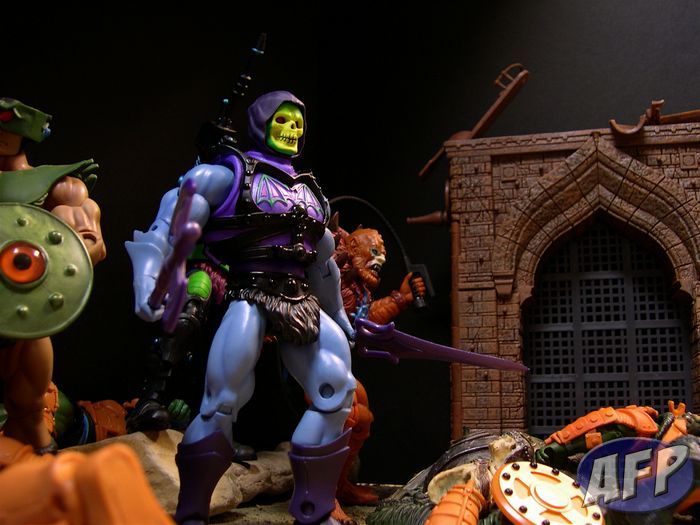 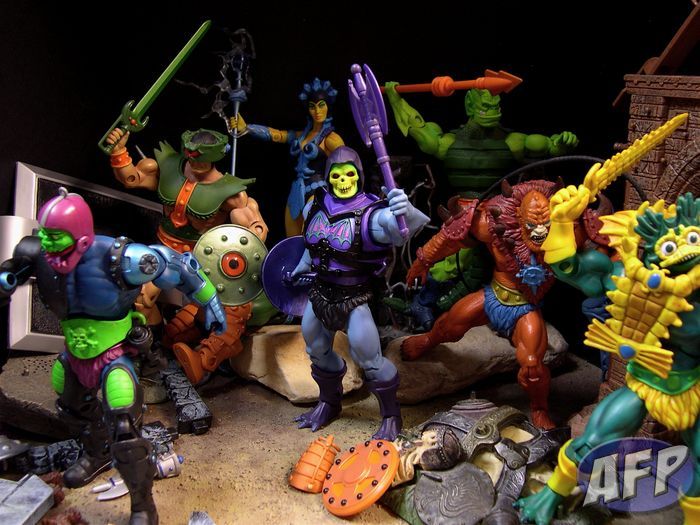 Articulation-wise, he still retains the original Skeletor’s range of movement. If anything, he can raise his arms more because he doesn’t have shoulder armor anymore. You can’t bring his arms close to his torso due to the thickness of the armor, but hey in general you do lose some movement with armor anyways.

His joints are nice and tight, my other Skeletors have some loose ankles, but BA Skeletor doesn’t have them. The right hand swivel on my figure was stuck, but a little session with my heat gun loosened it up quickly.

The figure I got also has some damage on his left shoulder – it looks like some plastic was melted. It just about a centimeter scratch on his shoulder. It doesn’t bother me too much – I chalk it up to some more “battle-damage.” I haven’t heard of anyone having the same defect, so it might be isolated to my figure. 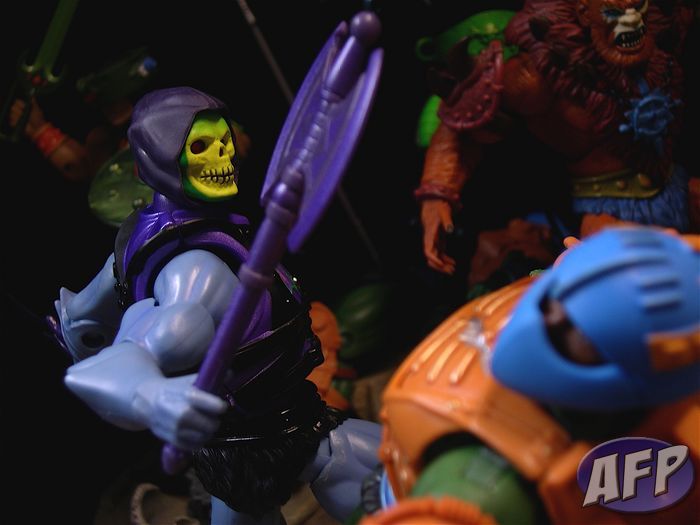 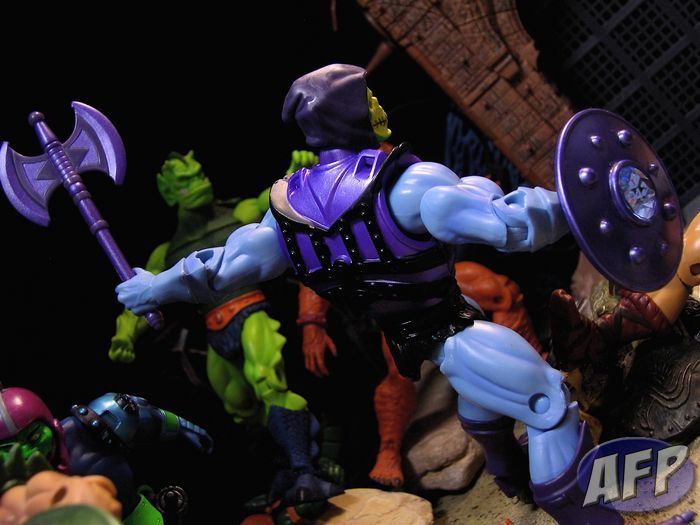 Paint-wise, I really have no complaints. I do find it a little odd that Skeletor painted his feet the same as his shin armor, but hey, that’s just me over-thinking stuff!

He looks great as a matching figure to Battle Armor He-man, and I actually can’t wait to have him ride Panthor. Because he sports the same loincloth He-Man wears, he’ll actually be a better fit on Panthor’s saddle than the first-release Skeletor, based on Battle Cat’s saddle design. 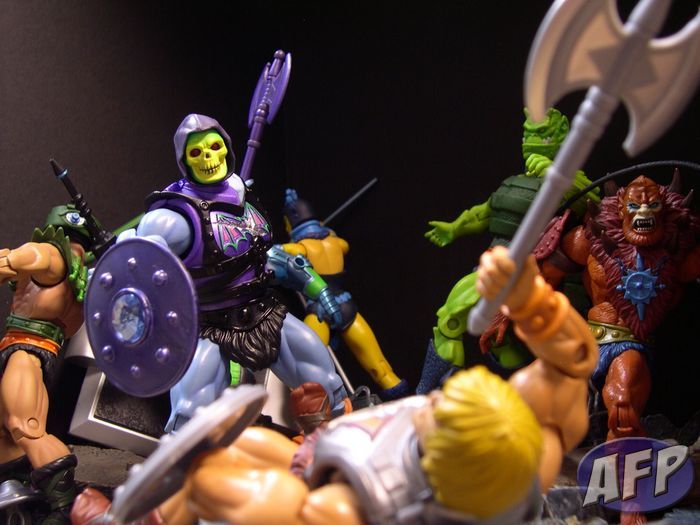 While I was taking pics, I was reminded of Skeletor’s awesome character design.  The yellow skull-face is such a nice visual and his body sculpt just naturally lends itself to some nice standing and battle poses. I feel the same way with his regular outfit. He’s just a visually striking character. 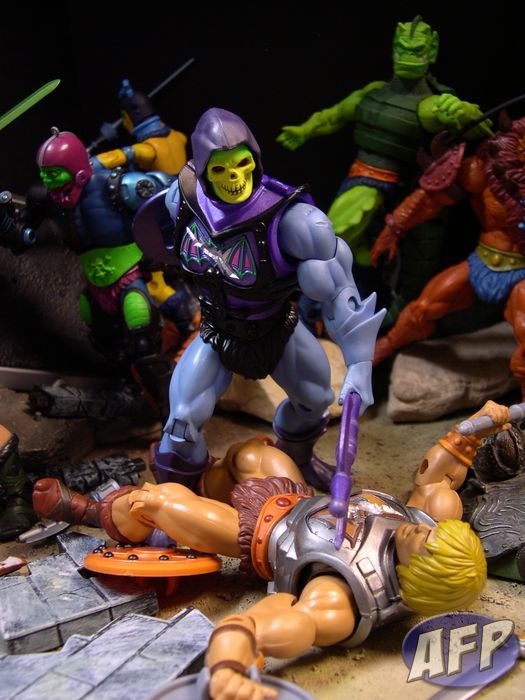 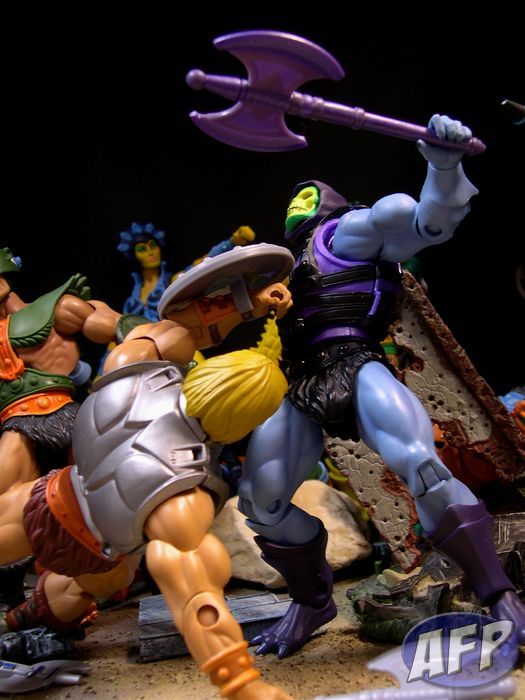 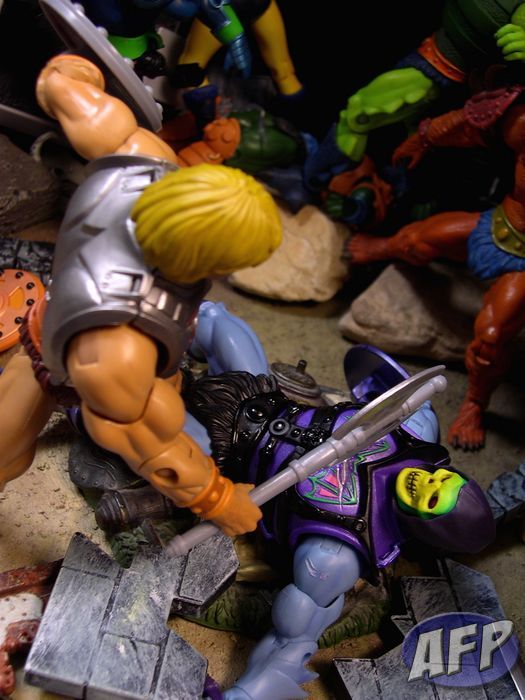 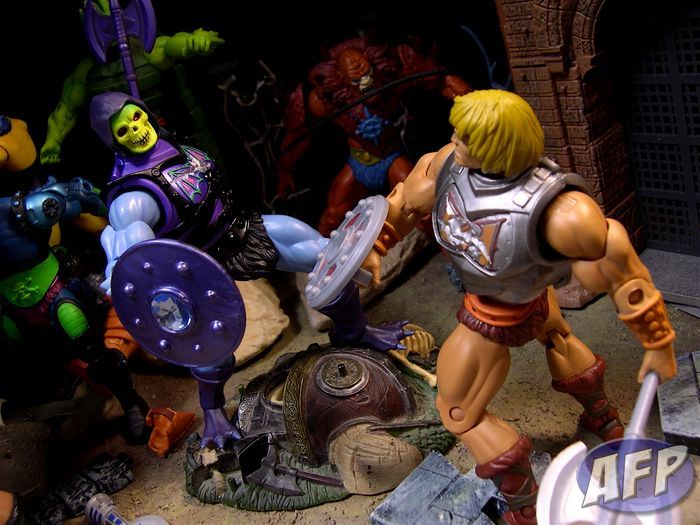 So aside from some minor QC issues, I’m really loving this figure. The streamlined Battle Armor looks great and the different paint apps on Skeletor’s face are a nice little extra. I had a lot of fun posing him, and he even looks badass in simple standing poses.

If you’re a fan of the original vintage toyline, there’s probably some nostalgia attached to owning this figure. It just feels like such an essential version of Skeletor for me. I remember some old vintage marketing artwork had this version of Skeletor riding Panthor to battle, and recreating that look is a must for me. I would understand though if newer collectors would pass on this figure, some might think of it as a gimmick to sell another Skeletor. But if you’re a fan of the vintage line, and you have fond memories of playing with the original figure, then I would think this would be a welcome addition to your collection.

That’s it for now! Thanks for looking and I hope you all enjoyed the pics! 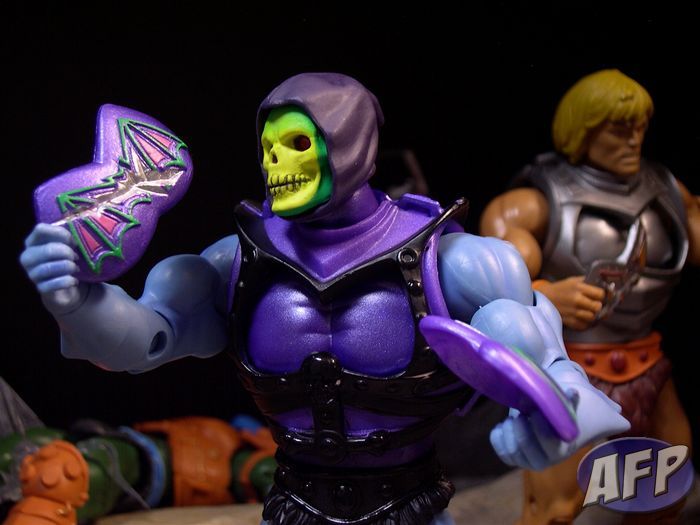 11 thoughts on “Masters of the Universe Classics Battle Armor Skeletor”