I really like how the Four Horsemen’s website gives an insider’s look at the production process for action figures. These Outer Space Men are a lot simpler than what we saw for Scarabus at Toypocalypse, but still pretty cool.

Outer Space Men waves 3 & 4 are currently chugging along in production in hopes to have Alpha Waves of both by San Diego Comic Con 2011!

We thought we’d give you a little sneak peek into the production end of things by showing you the tooling pattern parts that we recently sent out to the factory, and hopefully we’ll have more “in production” shots to show you in the coming weeks. 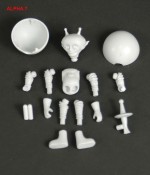 First up is little Alpha 7 – the first figure in wave 4.

Our original plan was to include a cool little rocket backpack with Alpha 7 that we’d created which included removable wings, rocket pods, missiles and even rocket flames! Unfortunately, tooling dollars on this wave came in a bit higher than we’d anticipated, so some things had to be cut and some minor compromises had to be made. As it is, this little fella’s STILL 16 separate parts! Hopefully we’ll see that backpack reappear in some future incarnation of OSM. Also, see those little pegs at the ends of his arms and legs? We’re hoping to turn those into small Glyos type connectors! If this works, there’ll be LOTS more applications for those down the road both with The Outer Space Men AND with Onell Design’s Glyos figures! Keep your fingers crossed…

Next we’ve got Electron+ – the second wave 4 figure.

You’ll notice that there seems to be many parts missing from this Electron+’s tooling pattern when compared to the other figures in these two waves. That’s because all of the parts that are missing from this image are parts that are shared with characters from Waves 1 and/or 2. That means that those parts have already been tooled, and we don’t need to include those in the new tooling pattern. The two ear discs on the sides of his head will be separate and removable as seen in the image, but the two domed plugs near the top of his head had to be solidified onto the head because of tooling costs. Once Electron+ is a complete figure, he’ll have a total of 22 parts. 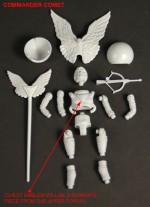 As noted in the image, Commander Comet’s chest emblem will be a separate, removable part from the upper torso. As with Electron+, you’ve probably noticed that Commander Comet’s missing a few parts. His hands and feet are shared parts with characters from waves 1 & 2, and those parts have already been tooled. When completed, Commander Comet will have 21 parts altogether. 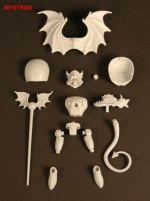 Last, we have the second member of wave 3 – Mystron.

You can’t see it in the image shown here, but Mystron will have a Glyos type connector hole on the back of his crotch part so his tail can be plugged in. The front, center chest disc will be a separate, removable part from the upper torso, but we had to leave the two outer chest discs attached because of tooling costs. Missing from this image are the already tooled arms, hands and lower legs which are shared with characters from waves 1 & 2. Once he’s complete, Mystron will have 22 parts total.

Let us know what you think so far. Head on over to the Outer Space Men threads at our message boards site – FANtastic Exclusive and join in on the discussion.