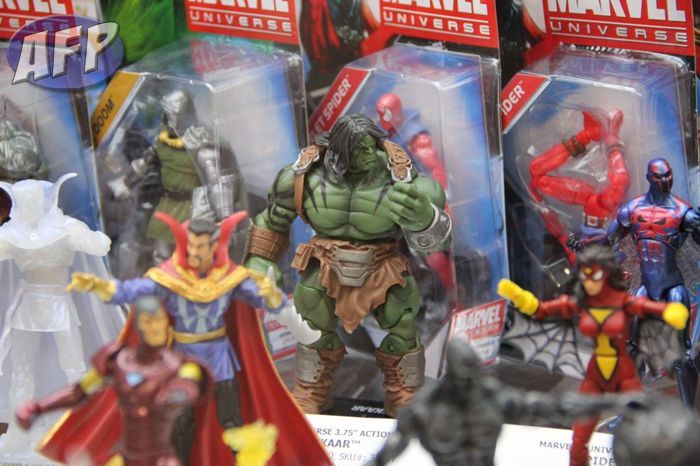 With all my excitement about Marvel Legends, I might have missed the Marvel Universe display – but that was simply not possible with all the figures on hand. Make no mistake, 6-inch figures may be coming back, but 4-inch will still rule the Marvel shelf space in your local toy stores. On hand were single-carded figures, more 2-packs, and the upcoming 3-pack retailer exclusives. I wonder if we’re going to see another big figure to follow the Sentinel and Galactus.

I know that most of these items are hand-painted protos, but that doesn’t keep me from being impressed on the level of detail that Hasbro is managing to get in these figures. Kraven and Wolverine both looked great.

It’s interesting to see how some characters, like Steve Rogers in his Super Soldier costume, are getting treatment in both Marvel Legends and Marvel Universe. But the tilt certainly favors MU, which seems to have the broader variety. How many of you would kill for a ML Darkhawk?

I like how Hasbro is going back to fix some of its early missteps in the line. Daredevil and Bullseye were pretty bad figures in the very first wave of Marvel Universe. The upcoming 2-pack will rectify that. Nevertheless, Hasbro still seems to be ok re-using that horrible base body on a Daredevil repaint in the single-carded line.

Before I forget, Hasbro also had a display of 4-inch figures under the Avengers brand name. I didn’t get a lot of details on the line, but from what they had on hand, this seems to be a bridge between the current lines of 4-inch movie figures and the lines that are a forgone conclusion with an Avengers live action movie in the works for next year.

There’s already a lot on hand, but I suspect we’ll get some more reveals after the Hasbro panel on Saturday.