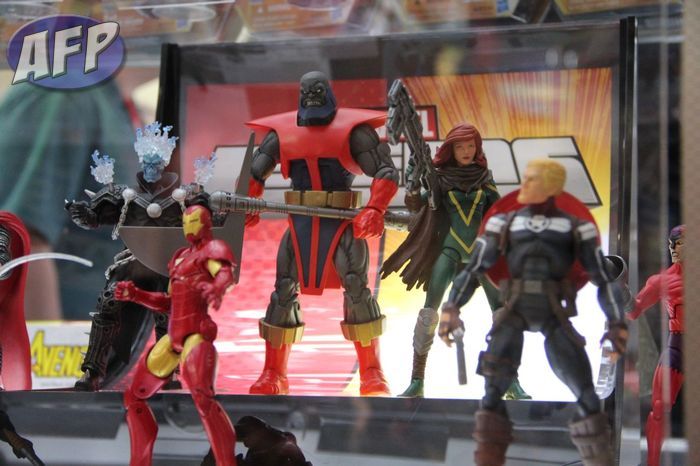 As we hoped and expected, Hasbro kicked off the relaunch of the 6-inch Marvel Legends brand with the SDCC exclusive Heroic Age Thor (previously referred to as Marvel Legends #0) and the first wave of the line.

The line for HasbroToyShop at Preview Night was every bit as packed as last year. When the official opening bell rang, all the folks who had been milling around trying to look innocent converged on the entrance. Luckily for me, Fwoosher trs was on hand and knew what to expect – Hiro Nagano and I were able to get in line before the whole thing shut down and people were told to come back tomorrow. Hasbro severely limited the number of exclusives that each person could pick up. I think that will increase how long they last, but will probably keep the lines going all show long.

In any case, Thor looks great – I think he’s not quite as tall as the Marvel Select version. People who were wondering about the articulation – yeah, it’s all there. Paint looks great, and the Mjolnir packaging includes a poster in the handle.

Hasbro also had on hand wave 1 of the Marvel Legends relaunch. As they indicated in our interview with the Hasbro Marvel brand team (part 1 | part 2), there will be seven figures and a Build-a-Figure – Terrax the Tamer. All big three Avengers are there – Thor (a non-lightning re-deco of the exclusive), Iron Man in his Extremis armor, and Steve Rogers in his current Super Soldier costume. Thor and Iron Man are all-new sculpts, although the word on the street is that Hasbro has had both sculpts in hand for a couple years. Rogers is some new parts on top of the Ka-Zar / Punisher body.

Of the four other characters, Constrictor, Klaw, and Hope all leverage the existing library of bucks. Ghost Rider (is that really him?) has so much new stuff on him that I don’t really know what’s under there. I can’t really tell if Terrax is using some old parts – I suspect it may be so because he’s go 2 fists, making it tough for him to really hang on to his weapon.

For the most part, I think this is a solid lineup that does cater to the long suffering Legends fans – there’s a good mix of long-standing most wanted figures and popular characters from recent comics. You may or may not be a fan of the base bucks, but I think the choices they made for each character makes sense.

We’ll find out more about the relaunch with the Hasbro Marvel panel on Saturday, where we should see the line-up for wave 2 (Bucky Cap and Ultimate Hawkeye?), including some concept art, sculpts, and maybe some painted prototypes.