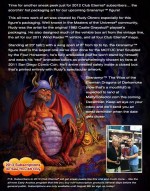 Club Eternia subscribers were treated to a sneak peek of the box art for Granamyr the Wise, of the Eternian Dragons of Darksmoke. Granymyr made several appearances in the original Masters of the Universe cartoon.

I was blown away by the sheer massiveness of Granymyr at San Diego Comic-Con. I wondered at the time if those little chicken legs would be able to support his weight if you tried to pose him standing up instead of sitting – this confirms that sadly, they won’t. I’m thinking that could be remedied using some of the flight stands that had been available through MattyCollector some time back – they’re pretty sturdy, and could be strategically placed under Granymyr’s posterior.

Rudy Obrero returns as the artist for the box art – as many know, he did a lot of the artwork for the original Masters toy line, including Castle Grayskull and the vehicles, and he returned to Classics for the Wind Raider box art. I did not know that Rudy also worked on the Club Eternia exclusive maps: Eternia, Etheria, and Preternia – click for the AFP map viewers for each.

Fans of Rudy’s art – be sure to check out the fan project he is working on with Joe Amaro for a Manta Raider vehicle.