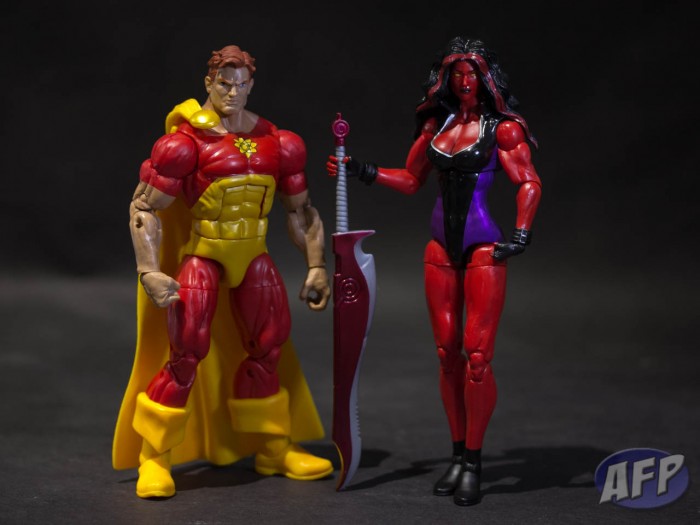 To close out the week, here’s the two Marvel Legends 2013 wave 1 figures that are introducing new body types to the line – Hyperion and Red She-Hulk. Both figures also come with parts of the mini-Build-A-Figure, Hit Monkey, but I’ll be taking a look at him in a future update. For now, let’s take a closer look at these two. 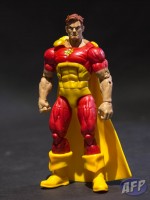 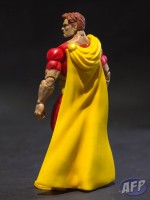 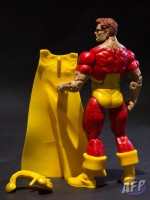 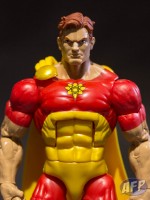 Hyperion sports a new, beautifully-sculpted heavy build, putting him in between the extremely large Warpath body (in heavy reuse with the Wrecking Crew) and the medium-heavy Face-Off Punisher (reused recently with Commander Steve Rogers, and Ultimate Cap). It’s primarily a blank body, which is a huge plus for reusability, but that means that some details specific to Hyperion are just painted on. Ideally, his collar and sleeves would have sculpted ridges instead of just a change in paint color. The biggest omission are the distinctive rivets that lock his undies in place in the wedgie position. If it’s a trade-off between those kinds of details and the ability to get additional characters to market, like the planned running change to Sentry, I think this was the right choice.

Hyperion’s unique cape is enabled by two back peg holes and two separate cape pieces. It’s a curious choice, perhaps to enable the front clasp to wrap around, but I think most production pieces will be like mine – with the front clasp not quite sitting flush against his collar bone. I’ll try reshaping it by heating, bending, and cooling, but it’ll probably need to be glued down to stay in place.

The head sculpt has got a ton of character and is appropriately menacing. This is a guy that has as much potential kick some bad guy ass as he does to flipping to the dark side, like he did during that great run in Marvel’s Exiles comic. Unfortunately, the paintwork on the eyes can look a little bug-eyed from some angles. They were painted to look slightly upward, facilitating the flying poses, and I’ve found it unnoticeable in those poses, or with the head tilted slightly down. Overall, the amount of paint is prety light – just the basics. It’s a clean tampo for his chest emblem, and there’s no paint washes or shading anywhere. He could use some to bring out details in his hair and some on the lips. 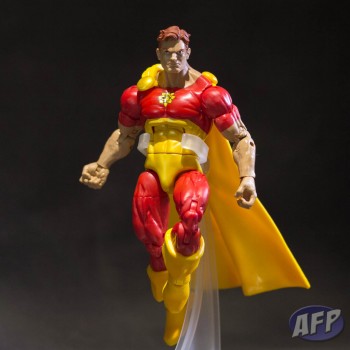 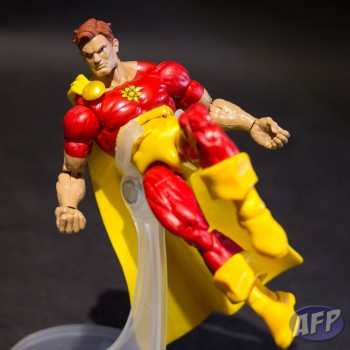 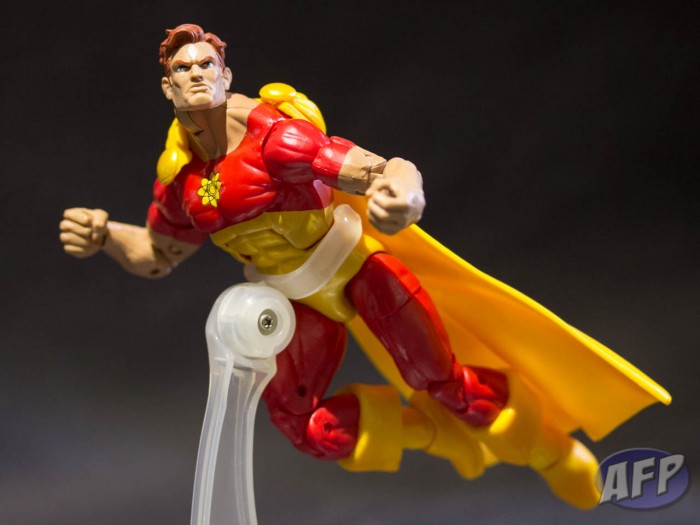 The new body works extremely well. On top of the standard ball-jointed shoulders, double-jointed elbows and knees, the articulation scheme also brings back some articulation points less used by Hasbro. Hyperion has a neck disk for great up and down movement, wrist hinges, the new rocker ankles that allow for great stability in all sorts of stances, and the 90-degree hips that have replaced ball-jointed hips for me as the best combo of poseability and aesthetics. On top of this, he’s got an ab crunch that’s got a really great range of motion. The combo really works well for a wide variety of flying poses.

The new body fills a big gap in the Marvel Legends line-up. Frankly, I would have loved to see some of the earlier big guys, like the Wrecking Crew, on this body. Clearly, it has a lot of potential for more characters. Hear me, Hasbro – make me a Luke Cage! 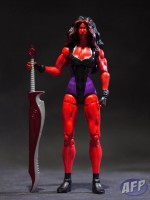 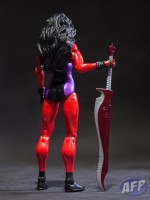 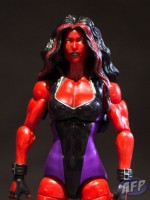 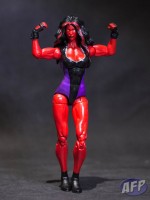 As with Hyperion, Red She-Hulk fills the heavy slot for Hasbro’s female Marvel Legends line-up. With the planned running change to Lyra, Hasbro has planed for re-use on this body, as this figure features a sculpted collar while the running change has a smooth sculpt. It’s got a delicate balance that’s achieved pretty masterfully – the sculpt is very muscular but extremely feminine at the same time. Being primarily blank, the element missing to me are boot cuffs. They’re just painted on here, so they look a little more like booties.

In combination with the articulation set-up you can get some great poses. The arms are a new combo – on their own, elbros are pretty limiting, but with bicep swivels, ball-jointed shoulders, and wrist hinges you can get natural poses and dynamic action poses. The only drawback is a a bicep flex limited to slightly less than 90 degrees. The hip pegs are placed in almost vertically. Once you adjust to that, they’re as easy to work with as 90-degree hips, but they allow for a more narrow gap between legs. With the double jointed knees and the the new rocker design on the ankles, the whole bottom half works really well – there’s a lot of stability there and a much wider variety of poses you can achieve, compared to all the past female figures we’ve gotten from Hasbro and Toy Biz. I think the placement of the hip pegs would preclude a waist swivel, but with the highly functional mid-torso joint, you get the swivel plus tilt that can let you get some very nice contrapposto poses. 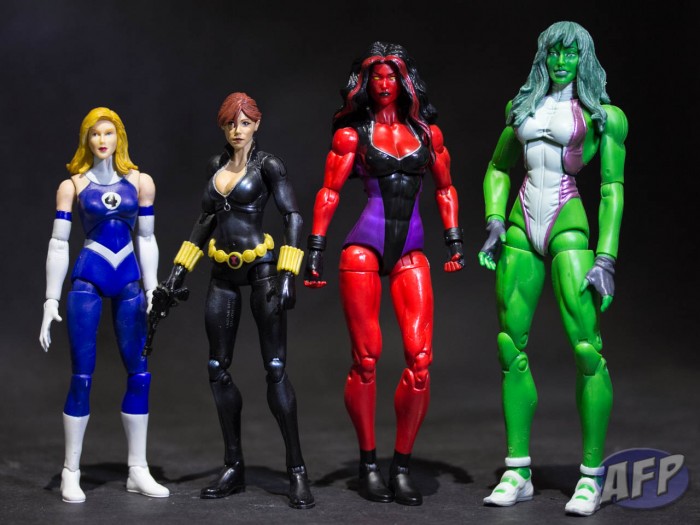 Legends has been lacking in variety on the female body types, and with each new release, Hasbro has made some dramatic improvements. I would really welcome a She-Hulk re-release on this new body, and there’s a ton of characters that are now possible – Thundra, Titania, and Volcana immediately come to mind. If the medium-heavy build Hasbro teased with Moonstone at SDCC last year is just as good as this body, Hasbro will have a really strong line-up for their female figures. 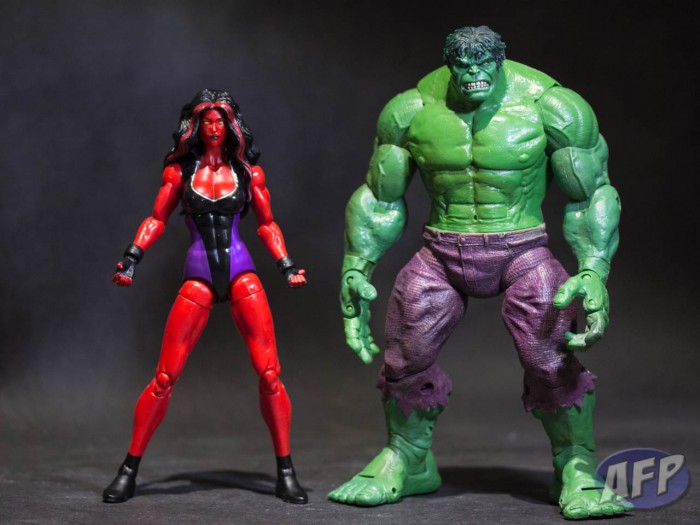 Best Hulks ever? Red She-Hulk and the tried and true Face-Off Hulk are the strongest ones there are – at least in my humble opinion. Which Hulks are your favorites?

We’ve got more HML 2013 wave 1 coming up, including your chance to win your own Wolverine and Ultimate Captain America (to be reviewed next). If you want more now, you can check out our HML 2013 wave 1 group shot and packaged pics and review of the Wolverine and Archangel figures from the wave. Excelsior!