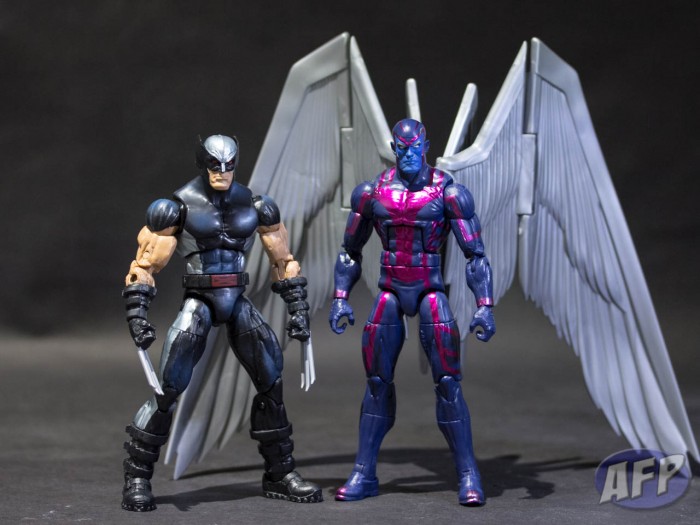 I figured after posting the group shot and packaged pics of HML 2013 wave 1, I would ease us in with the two figures that are purely re-decos – Wolverine and Archangel, who were both in Hasbro’s SDCC exclusive Uncanny X-Force 3-pack last summer. I’ll admit that when I first saw at San Diego that Hasbro would be reissuing these figures in just a few month’s time, I had flashbacks to the SDCC 2011 exclusive Marvel Legends Thor and his subsequent re-release in the first wave of (Return of) Marvel Legends. With Thor, at first I was disappointed with the announcement but was ultimately pleased with the retail re-release – and with these two X-Men, I went through the same. 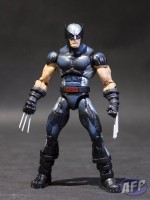 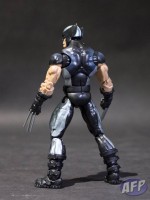 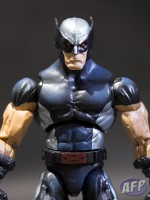 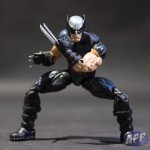 When I got the UXF 3-pack I thought that the Wolverine figure in it was arguably the best one ever made. And this new one retains all that made that figure great – a really good sculpt, fantastic articulation (including wrist hinges for claw slicing action and those awesome new ankle rockers), and a great paint scheme. And yes, finally, claws that actually remain straight, look dangerous, and are apparently removeable, although I’ve never done that. 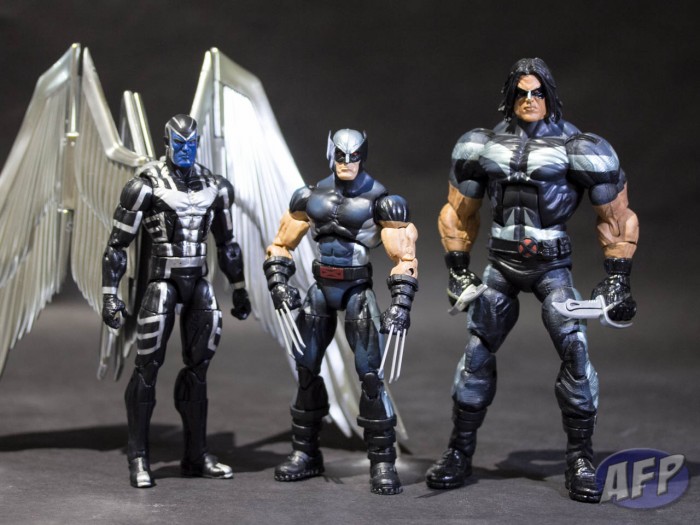 What’s different? The color scheme has been tweaked to match his costume during the Kyle and Yost run of X-Force, when the team was comprised of Wolvie, Archangel, Warpath, Wolfsbane, X-23, and more. The parts that were a dark gray on the Uncanny figure are silver here. Two other tweaks I noticed – this figure has hair painted on his forearms, but doesn’t have the buckles painted on his boots. On the Uncanny figure, no hair, painted buckles. 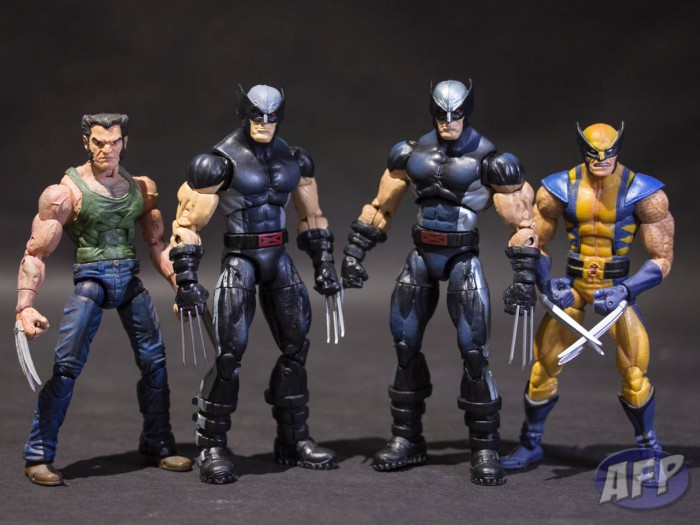 My one minor gripe with the figure is that it’s a bit on the tall side for my ideal Wolverine. In this regard, the Toy Biz Astonishing X-Men Wolverine had it just right. The AXM Wolvie is probably my runner-up to these 2 X-Force Wolvies – if not for that unfortunate waist swivel breaking up that belt and the floppy claws, it might still be on top. That green tank top Logan is from my CustomCon 16 entry – X-Men Legends Box Set: Gifted. (Remember when I used to customize? Just don’t judge me for that Emma Frost – I’ve done better with some help since then.) 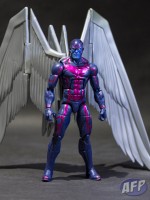 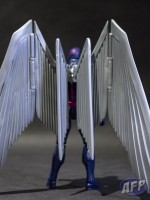 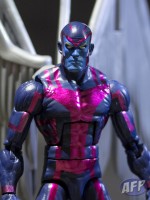 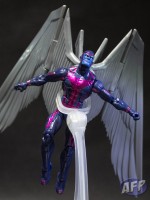 I gushed over the Archangel from the UXF 3-pack and the same applies here. It’s got the same great articulation that works well for vanilla and flying poses – great neck hinge. The head sculpt has got a lot of character, and the wing design works very well. 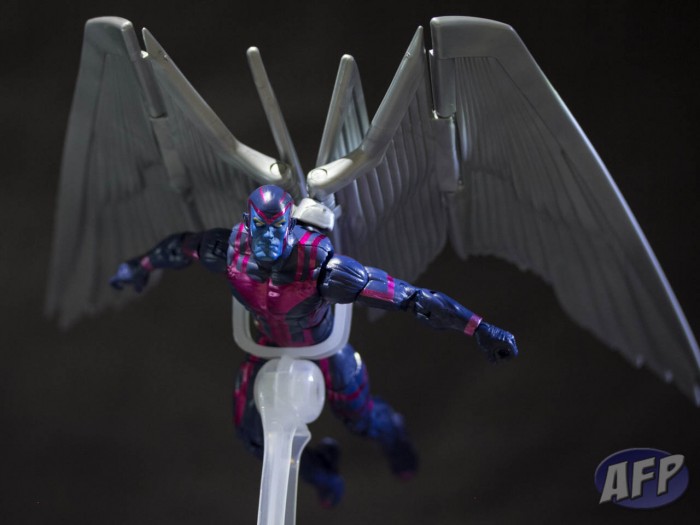 The hinged neck allows for flying poses. Yes, I know I should invest in some fishing wire instead of using stands. 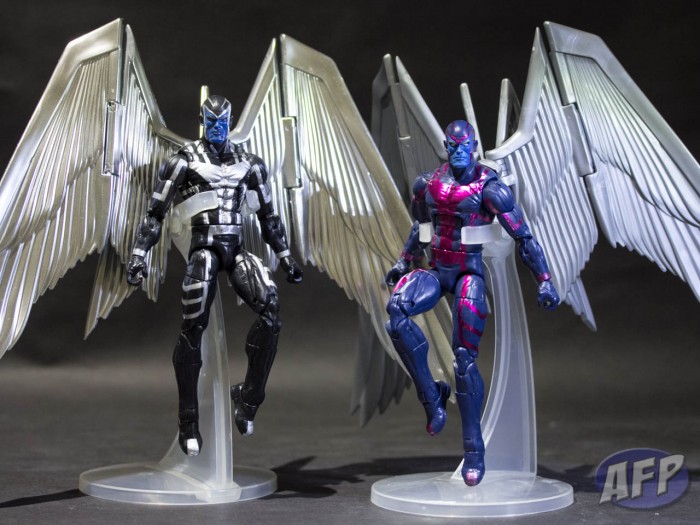 The difference, of course, between the previous release and this one is that we’re getting his more often used original blue and purple color scheme, from when Warren Worthington first became Apocalypse’s Horseman of Death, Archangel, after losing his own wings as the high-flying Angel, during a truly bad run in the original X-Factor. I do wish they had kept the metallic finish from the exclusive – in comparison the finish on the new wings are dull. 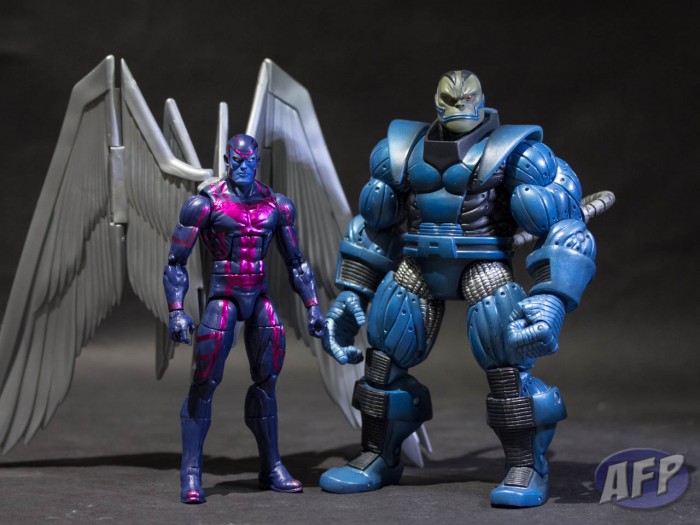 To be honest, I was not a fan of Archangel when Apocalypse first turned him – does every single Marvel character have to have a dark side? And even during the UXF run, he had a bit of a whiny streak to him. But the action figure is aces. Toy Biz had a decent Archangel from X-Men Classics (which for some reason I didn’t dig out of storage – I’ll have to do that for a comparison shot), but with this new head sculpt, the metallic paint on the body, and the wing design, Hasbro’s Archangel is a good improvement.

Stay tuned for more of HML 2013 wave 1, and look for your chance to win your own Wolverine (and Ultimate Captain America, to be reviewed soon). More details on that to come, but it will probably involve commenting on this post, liking AFP on Facebook, following AFP on Twitter, and other stuff like that. Feel free to get started on that now! 🙂