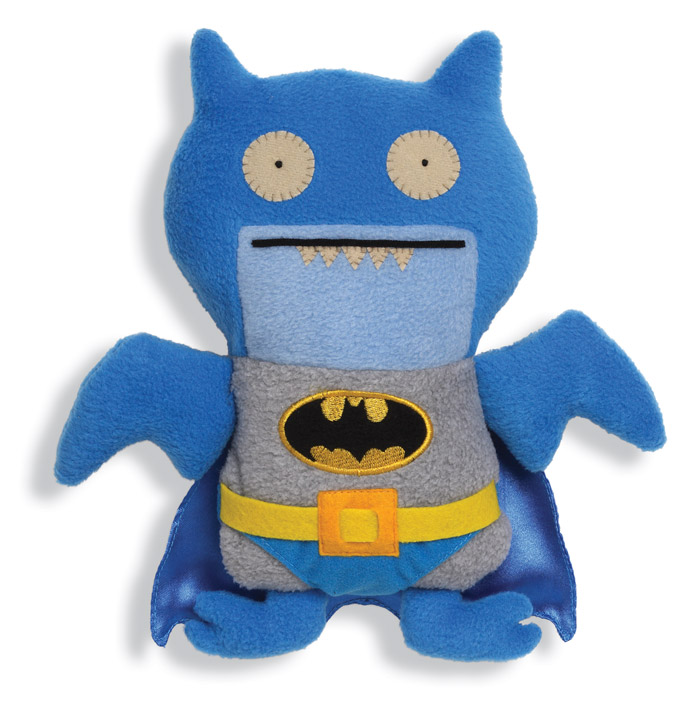 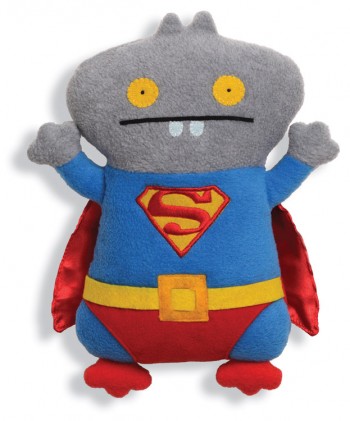 For the past couple of weeks, UGLYDOLL co-creator David Horvath has been posting pictures of his UGLYDOLL plush characters Ice-Bat and Babo as Batman and Superman on his Facebook page. Now it’s official, with Pretty Ugly and Warner Bros. announcing the collaboration.

When we first posted about the DC Ugly Dolls, we had also found that Diamond had already included the assortment in Previews. I’m guessing now that the assortment, which is listed on Urban Collector for about $140, consists of 6 plush figures, putting them at about $23 and change, which is in line with the press release. Also of note, Funko will be making vinyl figures of the DC Ugly Dolls that will hit in 4th quarter this year, right in time for the holidays.

UGLYDOLL Teams up with DC Comics

Super Heroes to Launch Toys and Accessories this Fall!

Pretty Ugly, LLC. and Warner Bros. Consumer Products, on behalf of DC Entertainment, announced today that they have entered into a co-branded collaboration with DC Comics Super Heroes and UGLYDOLL characters. GUND, a division of Enesco, will produce a diverse range of colorful and collectible Super Hero plush based on the DC Comics and UGLYDOLL character universes. The initial release this fall will be a trio that includes two versions of Ice-Bat™ as Batman™ and Babo™ as Superman™.

The plush characters will be offered at retail from $20+ and will be available through Diamond Comics and a broad range of retailers. FUNKO is also set to offer a collection of vinyl figures based on the DC Comics and UGLYDOLL plush collaboration during the holiday season this year. Additional categories of merchandise and collaborative characters will be announced in the coming months.

“We’ve long admired the fun and unique characters and products that Pretty Ugly designs and we are excited to partner with them so they can put their quirky twist on our iconic Super Heroes,” said Karen McTier, executive vice president, domestic licensing and worldwide marketing, Warner Bros. Consumer Products. “Working with the most iconic Super Hero brands has been a dream of ours,” said Alita Friedman, Chief Brand Officer of Pretty Ugly, LLC. “We were jumping up and down on both sides of the coast, as every sample that passed through our hands was simply amazing. The final versions are hilarious right down to the fun illustrations and stories on the hang tags. Our brands have the utmost respect for each other.”

GUND will be previewing their new collaborative plush merchandise at the summer Gift Shows and ASTRA show in June. Diamond Comics will be exhibiting at San Diego Comic-Con in July and in their infamous Previews catalog. FUNKO and others will launch merchandise in time for the holiday season.

Warner Bros. Consumer Products, a Warner Bros. Entertainment Company, is one of the leading licensing and retail merchandising organizations in the world.

DC Entertainment, home to iconic brands DC Comics (Superman, Batman, Green Lantern, Wonder Woman, The Flash), Vertigo (Sandman, Fables) and MAD, is the creative division charged with strategically integrating its content across Warner Bros. Entertainment and Time Warner. DC Entertainment works in concert with many key Warner Bros. divisions tounleash its stories and characters across all media, including but not limited to film, television, consumer products, home entertainment and interactive games. Publishing thousands of comic books, graphic novels and magazines each year, DC Entertainment is the largest English-language publisher of comics in the world. In January 2012, DC Entertainment, in collaboration with Warner Bros. and Time Warner divisions, launched We Can Be Heroes-a giving campaign featuring the iconic Justice League super heroes-to raise awareness and funds to fight the hunger crisis in the Horn of Africa.

BATMAN, SUPERMAN and all related characters and elements are trademarks of and © DC Comics.

David Horvath & Sun-Min Kim created the first UGLYDOLL hand-sewn plush toy in 2001. Since the inception of the first character, Wage™, who David drew on a love letter to Sun-Min, UGLYDOLL has grown into an entire universe of characters, stories, and products for all ages.

The UGLYDOLL brand was launched in 2002 by Pretty Ugly, LLC of Green Brook, NJ. The property is distinguished by David & Sun-Min’s unique aesthetic and voice defining, “ugly” as distinctive and unique. The award-winning UGLYDOLL characters appear in a variety of toys, books, apparel, and other licensed products that are available in thousands of stores, worldwide. For more information, please visit www.uglydolls.com.