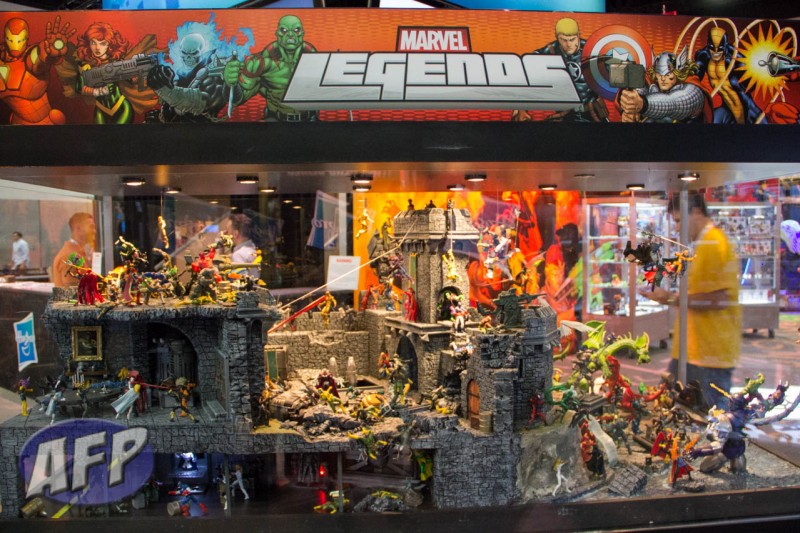 Sandman and I met with Adam Biehl (Vice President, Global Marvel Line at Hasbro) and Dwight Stall (Senior Marvel Product Design Manager, Hasbro) today for a brief conversation about Marvel Legends and the related 6-inch Marvel action figure lines. We talked about the health and direction of the Marvel lines, issues with distribution and the fate of running change variants, and more.

This was a great lead-in to the Hasbro Marvel panel, which we will be posting in full later this morning.

Adam: You guys want to talk about some action figures?

Ron: Marvel Legends – that’s what we want to talk about!

Dwight: I don’t want to talk about… I’ve talked about… You know what? (To Adam) You just take this one. (Laughs, walks away, then comes back.)

Adam: It’s doing well. You know, I gauge success by how many requests we get to do new figures. And they keep piling in more and more every year. And that’s great. We’re finding some fun and unique ways to deliver Legends to fans, beyond just the core main line Legends line, experimenting with the movie stuff. We did a little bit of that last year, exclusive at Wal-Mart, and this year, with the Iron Man 3 line. Those are doing really well.

Ron: We were surprised to see another wave of those coming, with Rescue, War Machine, and the Ben Kingsley Mandarin.

Adam: You know what? We’re finding that it’s making it easier for retailers to carry the collector stuff. The collector stuff doesn’t move as fast as the kid stuff, which is by nature, because of the audience. And so we have to constantly re-examine our processes and the way we build things out and brand them, and make it easier for the retailers to carry them. Also, when we do the movie branding, we’re finding we’re bringing new collectors in – casual collectors becoming more hardcore collectors, because they get drawn in by the movie events. And all the “trailering” that goes on around that – they’re like, “I want to get that Iron Patriot, and, oh, who’s that other guy?” They’re checking the comic books, and it’s kind of fun!

Ron: We also noticed you have a Captain America and a Baron Zemo out. They look great!

Adam: Thanks! That’s something that we’re going to be talking about at the panel as we lean into next year and some of the cool things we’ve got coming. That movie is right around the corner, so we’ve got to start talking about that stuff.

Dwight: And Marvel has been gracious enough to let us showcase some of our movie stuff tomorrow.

Ron: So we’ll be back then…

Ron: (Laughs.) Speaking of movies, what about Thor? People have been asking about 6-inch figures for Thor.

Adam: That’s something we decided not to do. The timing of the movie is what made that one hard. Two things – the timing of the movie, being November, and all of the amazing entertainment coming in the months following in the Spring of 2014. We had all that coming and we had to prioritize. Do we prioritize Thor? Or do we prioritize Captain America? We also have this little movie called Spider-Man coming out, so we had to make some hard decisions. There’s a finite amount of action figures that we can put out in any time period in any year, so we have to look at what’s coming out in entertainment and what’s moving at retail and we have to make those choices.

Sandman: It would have been a good way to bring out a Build-A-Figure Odin. 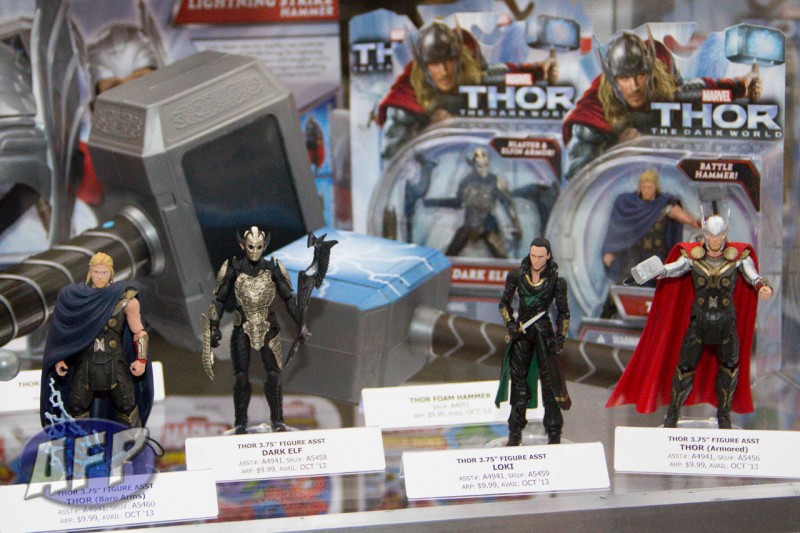 Dwight: Yes, it would have. But on the flip side, while we didn’t do a 6-inch, we did create a very tight, and small, and, in my opinion, some of the most beautiful 3 and 3/4 inch figures we’ve done to date. So while it’s not a very big line, there’s some beautiful, highly articulated, gorgeously decoed, figures coming.

Adam: We’re going to have many chances to make Thor in the future. He’s in another movie in 2015, so…

Ron: Oh, I haven’t heard about that one.

Adam: (Laughing) It’s probably going to be some blip on the radar. Avengers 2. We’ll probably have to do some small exclusive line for it.

Ron: Getting back to Legends, people are finding it hard to get them at big box stores.

Adam: Yup. This is why I mentioned before that we are looking to change how we’re doing some things. You know, we lose control once we make them available. It’s up to the retailers to order them, and, you know, retailers are acting differently than they used to. They aren’t resetting their shelves every quarter anymore – they’re just doing it a couple times a year.

So we’re making some changes to the way we brand them – you’ll notice that. We’re also making some changes in the way we’re handling variants in the future. We’ll talk about at the panel later. Every year we sit down and talk about what didn’t make it out and why, what happened. We told these guys we were gonna ship it, and it didn’t make it. Can we use it again later? The answer is always yes. We always find a way to use the stuff we didn’t ship before. So we’re constantly tweaking it.

The big guys operate differently from the smaller stores, so it’s a little harder. We think we’re going to make it easier, going forward.

Dwight: Not that this is a definitive answer by any means, but the scary part for the collectors is over. The figures have been tooled. They exist! It’s not like we’re showing things and are saying “Oh, we might do this,” and if there’s poor reception for it we can walk away. All of them are ready. They’re all tooled. All of our investment is in. It only makes sense to find the best opportunity to get them out there.

Adam: People ask us about the Wolverine line all the time, like “Where the hell is that?” They’re gonna be out there eventually. We just have to wait for the retailers to put them in the right spot and carry them. We’ll get there. 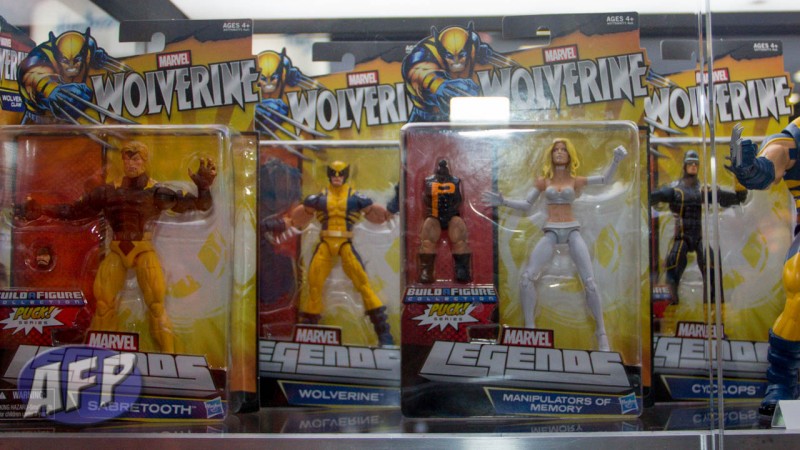 Ron: So the 6-inch Wolverine line – it’s Previews exclusive. Is that the only plan for them?

Adam: Right now yeah. Right now they’re going to be exclusive. We haven’t announced who yet, but there will be a home.

Ron: Is it going to be the same kind of thing with Emma Frost and Rogue with the running change swap-out…

Dwight: I’m pretty confident with the Previews, we are removing the Phoenix Cyclops and the Rogue from that formula. But we also have the next X-Men movie coming next year, and we’re currently working on plans on what we can use and if there’s opportunities to take the characters that didn’t make it in this year… They’re beautiful figures, so maybe we can put them into… We don’t have anything set right now, but we’re working on it.

Adam: They threw us for a loop on moving that movie up.

Dwight: Yeah, that was a “What?! Did I read this right? NOOOOoooOOOooo!”

Adam: We can’t move up our product by two months. Apparently movies can!

Dwight: So needless to say, while we’re here laughing and smiling, there’s some people back in Rhode Island scrambling.

Ron: I think the big one that people are really going to be in pain about is Piledriver. [Note: I meant Bulldozer. Thanks Hagop!] If the variant plan is changing…

Dwight: Yeah, but to the point we’re talking about later, there’s a little movie called Avengers 2. Some of those characters could possibly make sense as the classic swap-ins for those types of movies. So if we can’t figure out a way to get them to you sooner, and hopefully we can, there will be opportunities – Piledriver [Note: He meant Bulldozer – my fault] could be an Avengers villain. So we’ll sit down with Marvel and Jesse, and we’ll work through what makes sense and what’s the right way to make those guys and get them back out there. 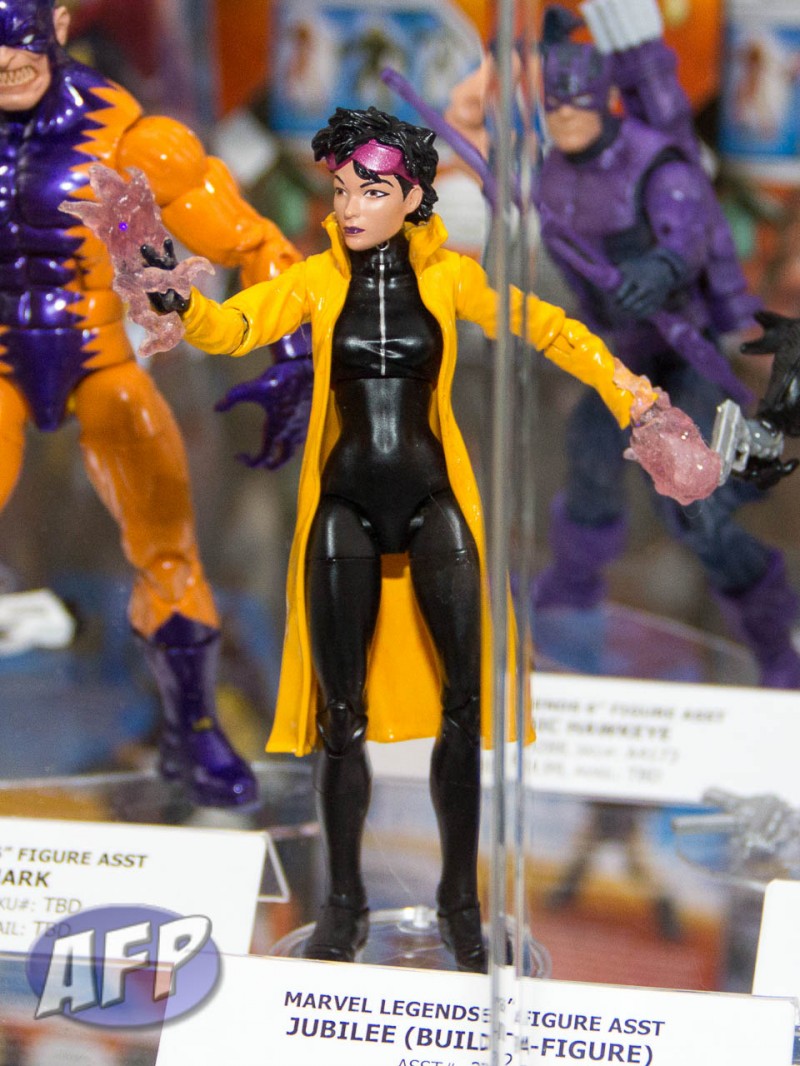 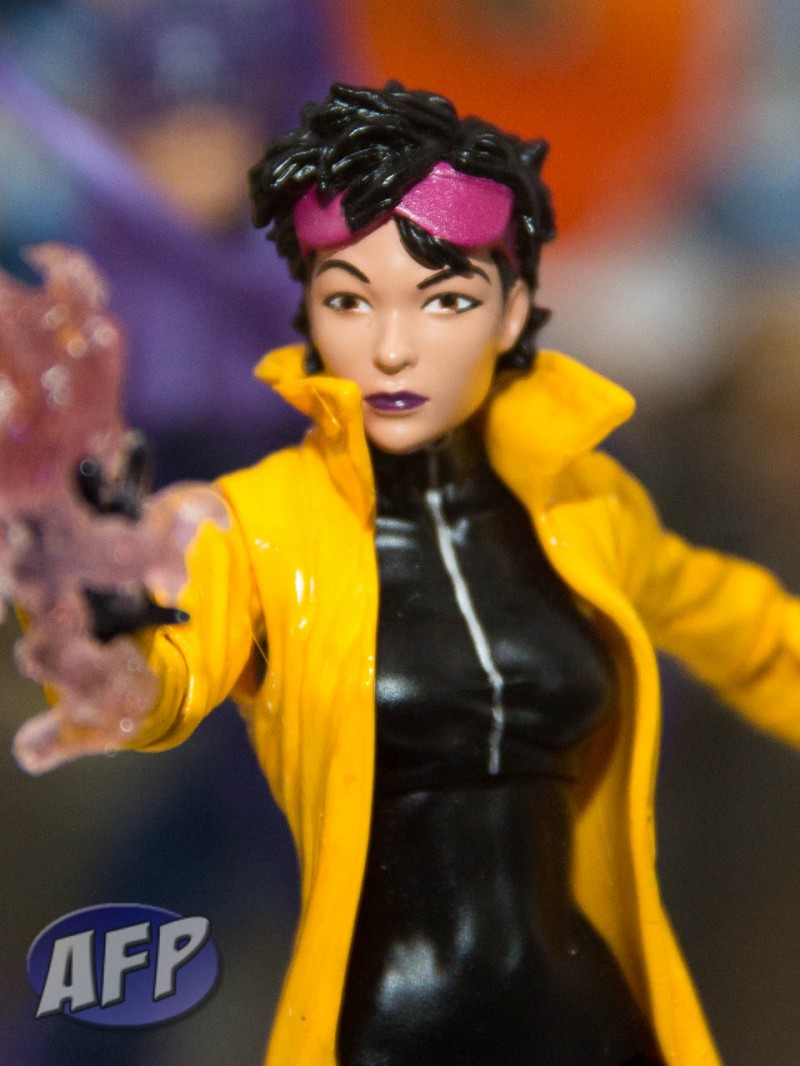 Ron: Quick question about the Jubilee – some folks are hoping you can do an Arnim Zola type swap-out so she can be in her 90s costume, you know, with the blue shorts…

Dwight: Do you want fabric shorts?

Adam: (Laughs.) That was a very quick response.

Dwight: I think that would be fantastic cannon fodder for the customizers out there. But for us, we’re sticking with the modern, right before the vampiric Jubilee.

Dwight: But we’re right before that. She can still do her fireworks…

Ron: Right right – I was saying it would be awful if you did a vampire Jubilee. People would just want to kill you guys.

Dwight: Actually, that would have been amazing, if we would have done that, just for the show. To show up with a vampire Jubilee head, and like, “What? Did I do something wrong?” (Laughs.) We need to start doing that next year, just to have some fun.

Ron: (Laughs.) So I know we’re running out of time, so I wanted to ask – the guys that are marked with no SKUs in the new wave, are those the ones that would have been variants, if you were continuing with the swap-out plan?

Dwight: Right. Blizzard to Batroc was that, Tigershark to Radioactive Man, and Songbird to Moonstone.

Ron: So that’s going to be different.

Sandman: I have one last one. You guys are building up a nice range of bodies, male and female. For the upcoming ones, are you still continuing on working, you know, in between the sizes?

Dwight: Right. When we sat down and said we wanted to revamp Legends a year or so ago, we were looking at the pieces and Adam gave us permission to explore a new way of looking at it. Like how do we, if we’re going to make it big and make it special, how do we get the right things out there that give the opportunity to do those types of things. So we came up with those three or four – we have some good male bodies – I think three new male bodies and three new female bodies as the bases to allow us to move forward with as much variety as quickly as possible.

Sandman: Will we see some new bodies at the panel today?

Dwight: You’ll be seeing some images from some upcoming stuff, yes, some sculpts, in progress.

Ron: Last quick one – Jubilee, how many pieces for the BAF?

Ron: Thanks so much guys!

Adam: Enjoy the rest of the show!