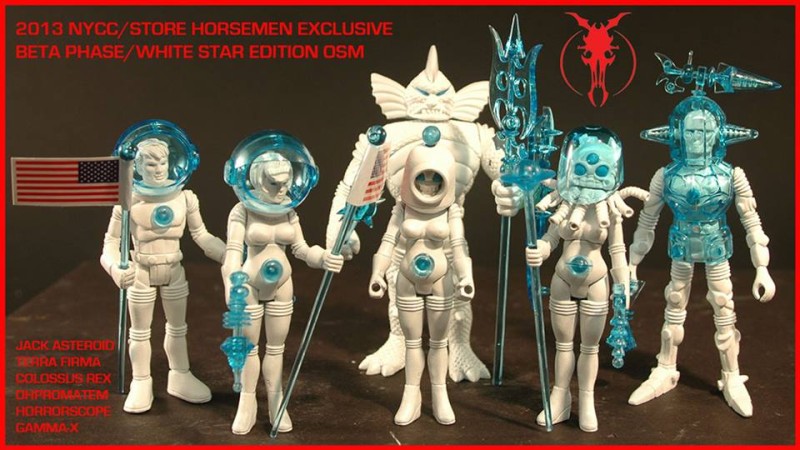 It wouldn’t be New York Comic Con without a Four Horsemen exclusive – and this time it’s a white and translucent blue deco for the Beta Phase / White Star edition of the Outer Space Men.

With sets of three figures for $35 and individual figures at $11 or $16 (depending on size), the Four Horsemen are testing the waters for lower price points. I wonder if that also means these will be made in higher quantities than the 200 sets of 8 White Star edition figures that ActionFigureXpress had available for San Diego Comic-Con this year – but they’ve said limited quantities for both the show and after, when they sell them on StoreHorsemen.

The 2013 New York Comic Con is just around the corner and we’re once again going to have sets of exclusive Outer Space Men action figures for sale at the convention and up for sale on StoreHorsemen.com the day following the show. Also, with this release we’re experiment with a huge drop in price and sell the figures in sets and individually! To cut these costs, all figures will be packaged in poly-bags with “White Star Edition” stickers.

These figures will match the White Star Edition Outer Space Men figures that were sold by ActionFigureXpress at the 2013 San Diego Comic Con. AFX still has a limited quantity of those sets still up for sale, so if you haven’t gotten your set yet, go HERE.

We’ll be stationed at the Onell Designs booth at NYCC this year for a couple hours on Saturday (details coming soon), and we’ll have these figures there for sale, as well as (hopefully) a couple other soon to be announced Four Horsemen goodies. Then, the following Monday after the show, these figures will also go up on Store Horsemen. Both sales will be very limited quantities, so be sure to get there early to make sure you get yours. Prices are listed below…