If you’re a toy fan, even if you don’t know his name, you’re probably a fan of his work. Dave Cortes started his professional career at McFarlane, but soon went independent. I first became a fan when he worked with Toy Biz on Marvel Legends, but his work on the Mezco Hellboy lines is still the tops.

One of his recent projects is on the Dream statue commemorating Neil Gaiman’s return to the character. Dave talks about sculpting, including the transition to digital from traditional clay sculpting. Be sure to check out the full interview with Dave Cortes. 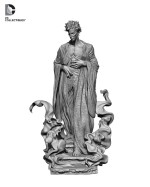 For those of us who are unfamiliar with the process of sculpting a collectible like this, can you give us a quick rundown? How does it generally work?

When starting a new project, I’m first given artwork, either concept or control art depending on whether it is a statue or articulated figure. I usually take reference photos for the projects, which means I’ll be dressing up one of my friends to shoot 360 images of them in a pose to get clothing detail and wrinkles which will make the whole modeling process go quicker. Then at some point I deviate from all reference and just do my own thing. About three weeks later we have something that everyone is happy with, then the model is prepped for 3D printing and the rest is out of my hands.

Do you miss sculpting traditionally or have you completely adapted to the digital medium?

I do miss traditional, but still get to do some here and there. I teach a traditional clay class as well as digital sculpting at SVA (School of Visual Arts), so I at least get to sculpt every fall with the students. Digital modeling is a great tool for the professional industry. There are many benefits to working digitally, so I will always suggest doing projects digitally for the companies I work for. At this point, I also favor the medium for my own work. I can work much quicker. But I do feel that my sixteen years sculpting in clay made the transition to digital easier, so I suggest some clay sculpting for every digital sculptor.

via Dreaming in Three Dimensions: An Interview with Dave Cortes | DC Comics.