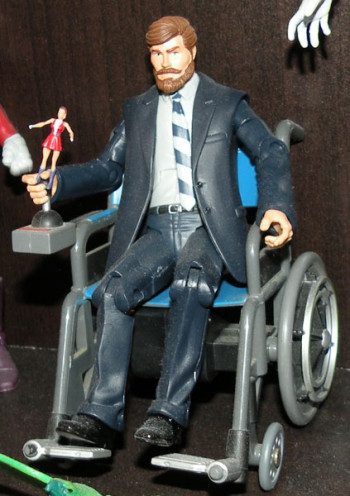 First off, filling in an important spot of The Doom Patrol, comes “The Chief” Niles Caulder. He is the manipulative genius. Caulder started out as a hero working against the villains of the DC Universe. He always seemed to be there to help good people after bad accidents. It wasn’t till later on that it was discovered The Chief was behind many of those accidents. Up until his apparent death he kept up the facade of being a hero. Once back from the dead Caulder didn’t try to hide the fact that he was in it for himself. He still did good deeds when it benefited himself. As time went on he slowly lost the trust of his team and the super hero community in general.

Next up, we finally have another member of the Golden Age Justice Society of America, Johnny Thunder.

John L. Thunder was born on 7 July 1917, a Saturday – the seventh day of the seventh month in a year ending in a 7 and on the 7th day of the week. This coincided with the 7th Circle of the Mooon Lahseen in the the calendar of the small Asian country of Badhnisia. The high priest of that country sent agents to kidnap the child, and in a ceremony which involved a belt bearing the Eternal Zone of the Zodiac being place around the child, the enchanted words Cei-U (Say You) were spoken 7 times.

Thus a spell was cast upon the boy that would be activated on his 7th birthday. Because enemies of Badhnisia discovered the powers the child would have, they tried to capture him, but he was returned – with the aid of a birthmark – to his rightful parents in the US. Johnny was unaware of the powers he had until he was 22. He was at the first meeting of the JSA and became their mascot – until the Flash (Jay Garrick) resigned his membership and Johnny was chosen. Johnny’s magical powers allowed him to summon a genie-like “Thunderbolt” which used its powers to aid Johnny.