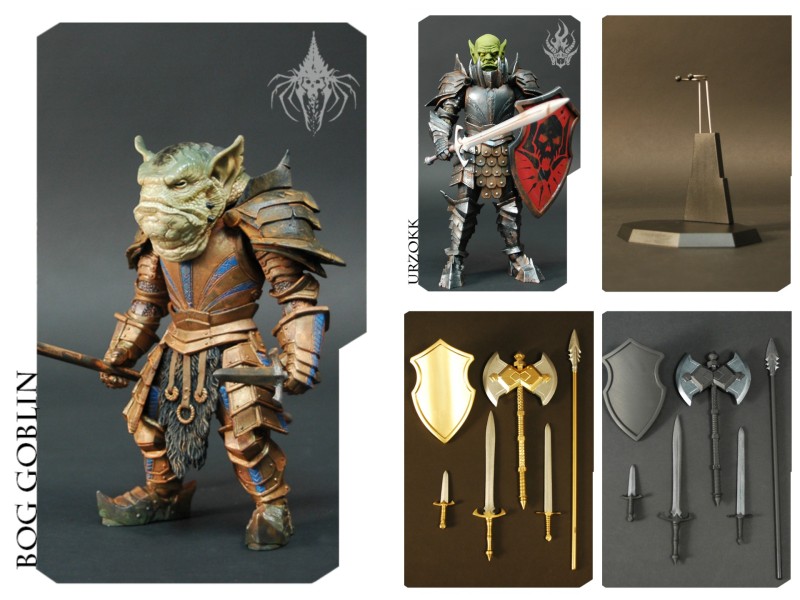 Forget stretch goals – after hearing the outcry for MOAR ORCS at Toy Fair, the Four Horsemen decided to unlock two of the stretch goal figures in advance of hitting the stretch goal thresholds for them. Urzokk and the previously unrevealed Bog Goblin are now available as add-ons. Not only that, but they’ve also added figure stands and weapons packs to the mix. Time to go visit the Mythic Legions Kickstarter page to click that blue “Manage” button and up your pledge!

And actually, *don’t* forget the stretch goals. To speed up unlocking the remaining figures, the Four Horsemen have doubled them up at each stretch goal threshold. So at $150K, we’ll get Attlus and Urkku (the remaining and most kick-ass of the Orcs), at $160K it’s Vitus and Asterionn, and at $170K it’s Azhar and Zazhar. We’ve yet to see the last four figures (they’re all still shown with generic silhouettes) but I’m betting we’ll want them, too.

We are now just a little over a week and a half into our Mythic Legions Kickstarter campaign, and along the way we have seen several requests for certain types of items and characters. One of the great things about Kickstarter is that we can make adjustments along the way to meet the needs of our backers. So today we are making some major adjustments to the Kickstarter page, including newly available items and a restructuring of the stretch goals. Here’s a rundown of what’s in store:

Four Horsemen Figure Stands:  These universal figure stands are perfect for displaying any and all 6” scale figures. They work perfectly for Mythic Legions figures, our various Bird figures, along with of our previous in-house lines. The adjustable metal figure clip allows for standing poses as well as hovering and flight poses. The figure stands are available as add ons for $5 shipped for both domestic and International backers.

Mythic Legions Weapon Packs:  Each pack includes all six of the current Mythic Legions weapons in a themed paint scheme. Those weapons include: a small sword, large sword, dagger, spear, axe, and shield! The two themes are a heroic pack which is painted in a shining silver and gold combination, while the evil pack is painted in and ominous black and gunmetal scheme. Each weapon pack is in the add ons section and they are $12 for US backers and $13 for International backers.

Urzokk and Bog Goblin figures:  Fans have been asking for Orcs, so we figured out a way to move around our tooling plan a bit so we can make it happen with Urzokk! And since those new parts are now available, we are also now able to offer the Bog Goblin figure! These two awesomely evil figures are now available as add ons at $33 a piece for US backers and $40 a piece for International backers.

Reveals and surprises:  We are currently working on casting up and painting the hidden stretch goals as the campaign is going on. We are going to show off updated silhouettes, and fully painted figures as they progress! We also hope to have some more exciting updates and surprise items available along they way to ensure that this campaign remains exciting, and most importantly, fun!

Again, we cannot thank you enough for all of the support on this project! The kind words and encouragement have been amazing. We just can’t wait to try and pay you all back by getting some seriously cool toys into your hands as quickly as we can!