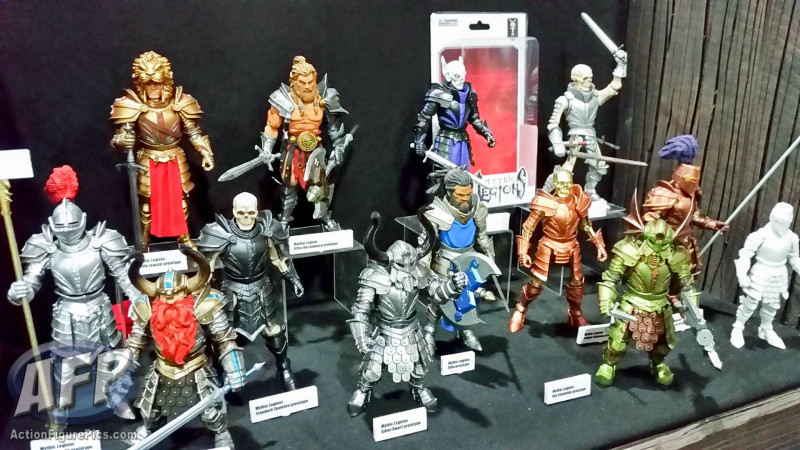 The higher funding target is needed because the tooling requirements are much higher. With the Ravens, aside from some variant feet on some figures, the only variables for each figure were the head and paint apps. With Mythic Legions, there’s at least three options for each figure component, and that’s why there’s so much customization possibilities beyond the multitude of champions and army builders presently available in the campaign.

Speaking of which, once the Horsemen wrap up their Toy Fair booth, they’re heading back to the studio to complete the paint work on the remaining figures – those silhouettes on the campaign page will be replaced with actual images of the planned stretch goal figures.

And Orc fans, fear not – Eric Treadaway told me that he has not one, but two solid ideas for Orc army builders – I pleaded with him to post teasers before those two Orc champion figures are unlocked, so stay tuned. For the Skeleton fans, he told me the hinged jaw skull will likely go on Tibius, one of the Skeleton champions, which is fitting, since that skull is the most damaged. Tibius will also get punched up in terms of his paint apps, to give him some flash above and beyond the army builders.

The Horsemen said they’ve heard the confusion coming from posting Raven variants on the Kickstarter page for Mythic Legions. They had been considering adding those variants to the campaign as additional pledge levels, but realize the hit it would put on our toy budgets. They’re pleased with the new options and want to see them in our hands, but how they get there is TBD.

It’s really amazing at the amount of figures that have already been revealed for the campaign. Check out this fly-by video of the Mythic Legions figures.

Note that these are painted prototypes – the knight on the far right of the display was scaled down to be the size of the planned production figures – around 6.5-inches tall.