I’m a bit confused.  Yes, my Masters of the Universe Classics Zodak arrived.  And today, I finally received shipping notification for my subscription figure for Teela, over a week after she and Zodak went on sale.  And my credit card – no charges yet for either (not that I’m complaining!)  I guess Mattel and Digital River (who runs their Mattycollector site) have some kinks to iron out.

But let’s talk about Zodak!  Of the 200X Masters redesigns, Zodak was one of my favorites.  I liked that they made him black – let’s face it – the only minorities in the original line were bad guys.  I liked the tats.  And I really liked the removable helmet.  So when Mattel announced Zodak after releasing Zodac in his back to white classic appearance, I was pretty psyched.

Mattel explains the Zodac / Zodak confusion by making the original Zodac the mentor of Zodak.  That still sounds confusing.  Someone told me to think of it this way: Zodac with a “c” is the classic figure.  Zodak with a “k” is the kickass 200x figure.  Ok, he actually said the “k” stands for Kar-tor, Zodak’s real name.  In the new Masters canon being established by Mattel in the cardback bios, Kar-tor is the main man now, as the original Zodac has left Eternia.  One interesting thing about the bio is that they did a reprint on the cardback to correct the spelling of Trolla.

I know many MOC collectors will hate this suggestion, but Zodak is another example where the big Masters logo obscures the view of the figure on card, so I wouldn’t mind seeing that change.  But I do open them all anyways, so it’s not a biggie. 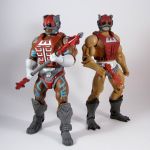 Zodak’s got almost all of the things that made his 200X figure great.  He’s black, he’s got the tats, and he’s got some awesome gloves (from Hordak), boots (from He-Ro, and armor instead of fur loin cloth that distinguish him from Zodac, where he gets the rest of his parts.  The only thing missing is a removable helmet.  That would have been a great touch, because the 200x Zodak had a really fantastic headsculpt.

He’s pretty light compared to other figures in this line in terms of accessories.  Like Zodac, he comes with removable chest armor and a cosmic weapon, this time a staff.  But on the plus side, has tattoos glow in the dark.  And I’m not sure if Mattel’s done some re-engineering on the ankles, but the side to side tilt on Zodak’s feet is the best in the line.  My He-Ro doesn’t have the same kind of movement.

Zodak is a very cool figure, but for me, Man-at-Arms and Tri-Klops still retain their spots at the top of the heap.

2 thoughts on “Masters of the Universe Classics Zodak”