Here are the latest questions and answers from Mattel. Thanks to Mattel and Toy Guru!

Masters of the Universe Classics

1. Zodak (pics and review) was the first “bonus” figure for the Masters of the Universe Classics line. Based on how he sold, what changes are you considering for bonus figures, if any? Do you have any update on combining bonus orders with Club Eternia subs so subscribers aren’t penalized with double shipping? 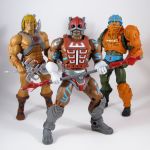 2. The MOTUC bios are really fun reading material. Who on the team is responsible for writing them, and what’s the process for it? Which bio is your favorite so far? Will we see different bio formats for other themes in the line like Princess of Power or Snakemen?

The bios are written by the marketing, design and packaging teams after hours and hours of research. Scareglow was one of the more fun bios to work on since he did not have that much history and the Horsemen came up with a great accessory which we wanted to work into his story.

3. You’ve mentioned new themes for DC products for 2010. While it may be too early to announce them, how about some hints for the themes for these Mattel lines so we can start speculating?

They will all have the same theme! It will be year long.

4. We were bummed to read that Animal Instincts will be the last DC Universe Classics 2-pack sold on Mattycollector.com for the foreseeable future. There’s a ton of buzz on it and the Color of Fear 2-packs, and DCUC is selling really well at retail. What was it about the Space Heroes and Battle for Earth 3 2-packs that you think caused them not to catch on as well as other DCUC products?

It is up to each collector to choose whether to purchase figures. In the end, the sets did not get enough support to continue them in 2010.

5. Fall Toy Preview, for mass retail toy buyers, was earlier this month. Is that event limited to the biggest retailers like Wal-Mart or Toys R Us, or are smaller retailers able to participate? How far out in advance are they buying? Do retail buyers just want to talk about the big lines like DCUC and WWE, or is there any interest in lines like MOTUC and Ghostbusters?

Mattel works with all retailers, and yes, there has been a growing interest in all of our collector lines!

Here’s a round-up of the other Ask Matty sessions from around the web. (Links to be added as they come up.)